The hearing comes as tech titans face tough scrutiny in Washington, London, Brussels and even Beijing, with increasing agreement across political divides that the world's largest tech companies have become overly powerful monopolies.

"The best thing to do here would be to admit that we have a huge monopoly problem across the board, and put in some stiffer rules and standards to address it," said antitrust panel chair Senator Amy Klobuchar, who has introduced broad new antitrust legislation. 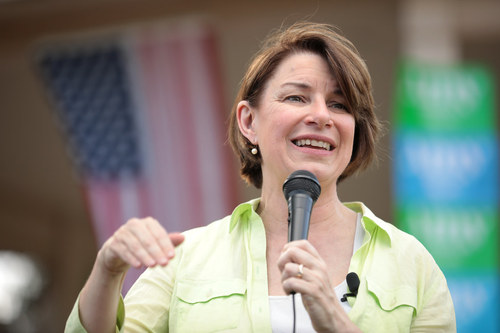 "We have a huge monopoly problem," says Senator Amy Klobuchar.

Spotify, Tile and Match (which owns Tinder) said having to share up to 30% of their in-app revenue with the app store platforms was anti-competitive.

Apple and Google said they used their fees on in-app purchases to provide security for users.

But when Senator Josh Hawley asked if Apple would devote all of the fees to security, Apple's chief compliance officer, Kyle Andeer, declined to say yes.

Companies also complained about platforms mimicking their best ideas, and "effectively breaking their user experience" by directing their users to their own features.

Tile, which makes Bluetooth trackers users can attach to their items, noted Apple had just this week introduced AirTags, an extremely similar product to theirs – except AirTags uses Apple's FindMy program, which is installed by default on iPhones and can't be deleted.

Meanwhile a digital rights advocate argued to the panel that people who purchase devices should be able to install whatever software they wanted on them.

Controlling what users can do with their phones makes it easier for authoritarian governments to restrict their people's rights, making digital monopolies a human rights issue, and not just a competition concern, said Evan Greer, who directs Fight for the Future.

Spotify also told the panel how Apple "threatened to take them off their App Store and stop promoting them" after they spoke out about Apple's monopoly behavior and high fees, Senator Klobuchar tweeted.

Apple prevented Spotify from telling customers it could pay for the service more cheaply outside Apple's iPhone app.

And Match said its single largest expense was the half-billion dollars in app store fees it paid Apple and Google annually.

Next month Fortnite maker Epic Games will begin arguing Apple is anti-competitive because it forces Epic to use its payment system in Fortnite's iPhone app.

Meanwhile Senator Klobuchar's Competition and Antitrust Law Enforcement Reform Act, which she introduced in February, is going through its stages.

The bill rewrites US antitrust law to make it more difficult for big companies to get approval for mergers, and it adds to the regulatory armory of the Federal Trade Commission (FTC) and Justice Department (DOJ).

But if the act passes, business will have to show mergers won't "create an appreciable risk of materially lessening competition."

Other added regulatory teeth in the bill include giving the FTJ more funding and the ability to issue civil fines.

And they wouldn't have to precisely define a market any more before launching antitrust cases, which is where many monopoly actions have failed.

If you run the only restaurant in a city (but there's also a supermarket), whether you're a monopoly or not depends on whether the market is "restaurants" or "food."

Ditto Facebook: Is the market "social networking" (it's probably a monopoly) or messaging (where WhatsApp, Signal, Telegram and iChat are available, too)?

Is Google's market search (probably a monopoly) or "online information" (probably not)?

How a bill becomes a law

So will this big bill pass?

Constraining the tech giants is good politics, and Senator Klobuchar has friends, including some across the political aisle.

Senator Josh Hawley is a Republican who has introduced amendments to prohibit mergers and acquisitions by online platforms.

In the House, the antitrust ranking member Ken Buck is also a Republican who has said pursuing the online giants' anticompetitive actions is a top priority for him.

Look for Klobuchar to use her panel to launch more hearings about antitrust in other sectors, including telecom, and for all of these to be closely tied to her legislative push.

"Having a few hearings where you're sitting at a movie throwing popcorn at a screen, at the CEOs, isn't going to be enough," she says.