VEON's decision to sell its stake in Italy's Wind Tre is starting to look like the smartest telecom move of the year.

When it merged its Wind business with Hutchison's 3 Italia, the whole point was to muscle up in the boxing ring of Italy's mobile market. The pumped-up telco would also be able to cut the fat of its overlapping operations and networks, and give its profit margins some punch.

But after Italy's cack-handed auction of 5G spectrum this week, Wind Tre must be the undisputed weakling of Italian mobile. Where did it all go wrong? (See Italy's $7.6B 5G bonanza puts telcos on the rack.)

It certainly didn't start with the 5G auction. Competition authorities, in their pro-consumer wisdom, refused to let a merger go through unless 3 Italia and Wind Telecomunicazioni SpA sold a chunk of their business to another player. In this way, they would ensure Italy remained a four-player mobile market and did not stray onto the path of uncompetitive three-player wickedness.

This kind of defeated one purpose of the merger, but far worse lay ahead when 3 and Wind opened discussions with Iliad (Euronext: ILD) about that sale of assets. Owned by French billionaire Xavier Niel, Iliad had already turned the French mobile market into a bloodbath when it launched its low-cost service there in early 2012. The old timers of Orange, SFR and Bouygues Telecom spent several quarters hemorrhaging customers and service revenues. Only in the last couple of years have they staunched the flow. (See Iliad 'Disappointed' by H1 Customer Losses.)

Letting Iliad into the Italian market, then, was possibly the dumbest move since a bunch of Trojans from the original Iliad found an immense wooden horse outside their city gates, just large enough to contain a crack squad of the Greek troops they were fighting, and decided to haul it inside.

Who Could Have Guessed? 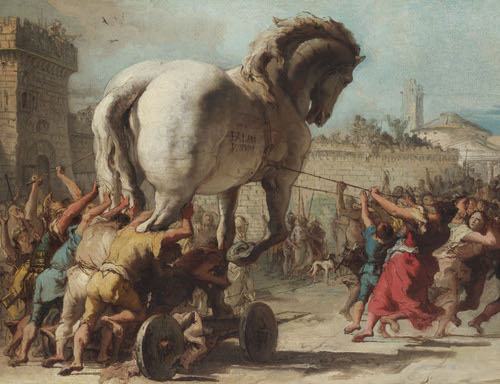 Don't bother checking for trapdoors. It's obviously a gift from those warlike Greeks.

Even so, no one expected Iliad to wreak quite as much carnage in Italy as it had in France. Italy had already grown used to four players, unlike France when Iliad first arrived, and Italian prices were among the lowest in western Europe. (See Iliad's Italian Odyssey May Be a Hard Slog.)

So it came as a shock when Iliad managed to capture about 1 million customers after just 50 days on the Italian prowl. And there was an even bigger shock when the publication of financial reports showed the scale of the damage to other telcos. While the Telecom Italia (TIM) fortifications proved solid, Vodafone Italy registered an "organic" year-on-year decline of 7% in service revenues for the April-to-June quarter. But Wind Tre took the most punishing blows. Its revenues for the first six months of 2018 tumbled a tenth, to 2.77 billion ($3.2 billion), and its earnings (before interest, tax, depreciation and amortization) fell 8.5%, to 995 million ($1.1 billion). Between March and June, it lost about 600,000 customers. (See Iliad Grabs 1M Customers by Day 50 of Italian Odyssey, ZTE ban and Iliad entry blow Wind Tre of course, Telecom Italia Says 5G Auction May Force It to Sell Assets and Sales Squeeze to Drive Heavier Cutbacks at Vodafone.)

Iliad's arrival was not the only problem. Wind Tre had also cozied up to ZTE Corp. (Shenzhen: 000063; Hong Kong: 0763), a Chinese maker of network equipment that was banned from acquiring US components for part of the year. As the dopey Trojan that pulled Iliad into Italy, Wind Tre pinned the blame for its customer losses chiefly on ZTE. The US ban, it said in its earnings report, had delayed work on network improvements and affected its ability to retain subscribers.

Analysts aren't optimistic. Following Iliad's arrival, Moody's, a ratings agency, thinks Wind Tre's service revenues will fall 8-9%, to around 3.5 billion ($4 billion), next year. It also expects the company's earnings to fall by 5-6%. For a company with the debt profile of Wind Tre, that is scary. At the end of June, the Italian company was one of Europe's most leveraged telcos, with net debts that equaled about 4.5 times its annual earnings.

That Moody's forecast, however, was made before Italy's 5G auction results were announced. Raking in $7.6 billion for the public sector, that deeply flawed sale may force all Italian operators to wear tighter outfits next year. Next to the 2.4 billion that Telecom Italia and Vodafone each forked out, Wind Tre spent a modest 517 million ($594 million). But it walked off with less spectrum than any other player -- just 20MHz in the 3.7GHz band and a 200MHz license for the 26GHz range.

Jeffrey Hedburg, Wind Tre's CEO, tried to put on a brave face this week. "By combining our existing and unused 30MHz of 2.6GHz '5G ready' spectrum with the newly acquired frequencies, we will be able to launch 5G on 50MHz," he said in a company statement. Few will be convinced. Dhananjay Mirchandani, an analyst with Bernstein, told the UK's Financial Times newspaper that Wind Tre's spectrum shortage will lead to a long-term decline in market share.

Wind Tre's backers must bear some of the responsibility for its current predicament. Yet regulatory authorities in Europe and Italy are also to blame. Their requirement that 3 and Wind sell assets to another company was a blow to the gut. The just-finished spectrum auction was entirely below the belt, structured to leave two companies holding 80MHz mid-band licenses and two with meager 20MHz ones.

At least VEON will be happy, though. It sold its 50% stake in Wind Tre to Hutchison just last month, collecting 2.45 billion ($2.8 billion) as it sealed the deal. When you strike that sort of agreement, the last thing you want to see is the sold business come out fighting. (See Rudderless VEON Keeps Digital on Down-Low.)

jerehada 10/10/2018 | 3:19:49 AM
telcos will be shivering But you wonder why the bidding went so high and it can come as no surprise to regulators who challenge slower investment when they such so much out of the market in a seemingly capricious way.
Reply | Post Message | MESSAGES LIST | START A BOARD