What Next for DT After T-Mobile, Sprint Bust-Up?

Once again, the telecom press wasted acres of print and online space writing about a marriage that was not to be.

In reporting the latest failure by T-Mobile US Inc. and Sprint Corp. (NYSE: S) to tie the knot, journalists have pondered the control freakery of Masayoshi Son, the CEO of Sprint parent SoftBank, whose reluctance to accept a minority stake in the merger has been blamed for its demise.

But it takes two to mess up a deal. Having once seen T-Mobile as a wild child it would happily cut loose, Deutsche Telekom AG (NYSE: DT) has grown fond of its fast-growing US subsidiary in the last couple of years. It refused to let go on terms that Son would accept.

The question now is whether the wild child is about to mature into a less disruptive and somewhat podgier relation, lacking the fleet-footedness that has made it such a hit.

While the collapse of the merger is seen as a particular blow to Sprint, which has struggled to compete against its bigger rivals, it could leave T-Mobile in an awkward spot, too. (See Sprint, T-Mobile Merger Falls Apart (Again!).)

That is not immediately apparent. Noting the rate of customer growth at T-Mobile, the deal's naysayers had argued that it would bind the Deutsche Telekom subsidiary in chains. It would inevitably have forced CEO John Legere to spend less time on his favorite activity -- badmouthing competitors and experimenting with new promotions -- and focus instead on the difficult task of combining two very different network businesses. That process could have included slashing up to 30,000 jobs, according to financial analysts.

Contemplating the reduction in competition that a merger would bring, market leaders AT&T Inc. (NYSE: T) and Verizon Communications Inc. (NYSE: VZ), which have been hurt by Legere's legerdemain, may actually be as disappointed as anyone that wedding plans are off.

Yet Deutsche Telekom's managers evidently think T-Mobile lacks the muscle it needs to prevail in the long run.

It is not hard to see why. Last year, T-Mobile made about $37.2 billion in sales, less than a quarter of the $164 billion that AT&T generated over the same period. Verizon also dwarfs T-Mobile in sales terms, having reported revenues of $126 billion in 2016. Both giants operate much more diverse businesses than T-Mobile -- geographically and in terms of the services they provide -- but their heft cannot be ignored.

At the same time, T-Mobile appears to be running lower on gas, as the chart below indicates. While undeniably still impressive, growth in terms of revenues and customer numbers has slowed down as the business has matured and rivals have bitten back. For a long time, T-Mobile has been the only part of Deutsche Telekom delivering meaningful growth in sales. Should that change in the future, as trends suggest it might, the US subsidiary will look far less attractive to its current owners. 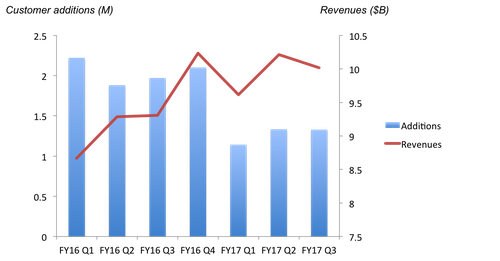 Then, of course, there is the next-generation 5G technology, the aggressive rollout of which Legere has prioritized. By 2020, he announced earlier this year, T-Mobile aims to have a nationwide 5G network in place. Were nationwide really to mean available nearly everywhere, that deployment could cost as much as $25 billion, according to Ovum Ltd. analyst Daryl Schoolar. Even if T-Mobile is exaggerating the scale of its short-term ambition, investment in more advanced mobile technology seems likely to gobble up capital expenditure in the next two years. (See Is T-Mobile's 5G Plan Just a Pipe Dream?.)

A tie-up with Sprint could have helped to reduce some of this cost burden through the "synergies" that companies so often talk up when announcing takeover deals. Staff cuts would have reduced the size of the combined workforce by roughly 38%, if the upper estimates from analysts were anything to go by.

On a related point, the deal would also have given T-Mobile access to a huge swathe of spectrum in the 2.5GHz band. As anyone in the industry knows, spectrum is the lifeblood of mobile communications, and 5G services will consume lots of it.

Deutsche Telekom's line has always been that it is not desperate to offload T-Mobile, and will consider opportunities to be a "kingmaker" as and when they come along. In the short term, it will be a case of business as usual for Legere and his colleagues. But as the market dynamics shift, Deutsche Telekom may be on the lookout for a new marriageable partner -- especially if Sprint finds one first.