Orange saw revenues in its main French market dip for the first time in about two years during the first three months of the year amid fierce competition between the country's network operators.

Overall revenues were unchanged compared with the year-earlier period, at about 10.2 billion ($11.4 billion), thanks to marginal growth in other European markets and a strong performance in Africa and the Middle East.

Orange also managed a 0.7% improvement in EBITDA (earnings before interest, tax, depreciation and amortization) after leases, to nearly 2.6 billion ($2.9 billion), but warned that earnings growth would be slightly lower this year than in 2018.

That forecast ignores the impact of a recently announced network-sharing deal with Vodafone in Spain, as the two operators prepare for the rollout of next-generation 5G services.

Such arrangements are becoming a common feature of the European telecom landscape as operators try to minimize the costs of building 5G infrastructure while sales growth remains elusive.

Despite the excitement that surrounds 5G, Orange said its capital expenditure would be slightly lower this year than in 2018, when it spent around 7.4 billion ($8.3 billion) in total.

France has yet to hold a 5G spectrum auction, although Orange has already made substantial investments in recent years in the high-speed fiber networks needed to support much higher-speed mobile connections.

The capex guidance is not new -- Orange had indicated back in late 2017 that investments would probably peak in 2018 before declining in subsequent years -- but it may disappoint equipment vendors hoping the rollout of 5G networks will fuel spending on network gear.

For investors, the main concern will be the performance in France, where revenues fell despite growth in the customer base (see chart below). Indeed, Orange's share price dipped by almost 3.5% on the Paris exchange in early trading Tuesday to 13.89. 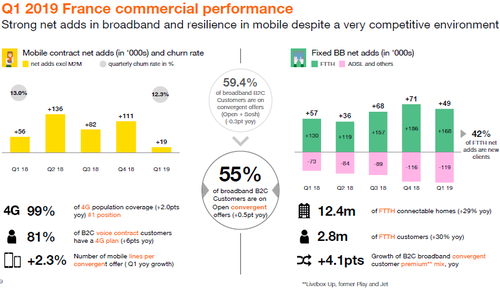 Orange blamed the setback on the end of some promotional activities and a slowdown in equipment sales, with CEO Stephane Richard noting the tough conditions in his published comments about the quarterly update.

"During the quarter, the group succeeded in maintaining its high quality commercial performance in spite of a particularly challenging competitive context notably in our two principal countries of France and Spain," he said. "Our strategy is paying off since EBITDAal [EBITDA after leases] is continuing to grow while revenues remain stable, allowing us to reaffirm our 2019 objectives."

Unlike Vodafone, which is slashing headcount in Spain after sharp declines in sales and profits, Orange managed slight revenue growth of 0.4% at its Spanish operation, to around 1.3 billion ($1.5 billion), thanks largely to its fixed and wholesale divisions.

The standout unit was Africa and the Middle East, which registered an 8.3% increase in revenues, to more than 1.3 billion ($1.5 billion), due mainly to customer interest in mobile money and data services.