Is There a Payoff for Free Wireless?

If you look carefully enough, you can find free wireless service all over the place.

For example, MVNO NetZero offers 200 megabytes of wireless data for free every month. Another MVNO, Consumer Cellular, gives new customers one free month of service. Sprint began offering a free year of unlimited wireless service in 2017 to customers who bring their own phone to the operator, though it has since discontinued that offer. And T-Mobile just last month launched a "test drive" offer that allows customers to use the operator's network for 30 days with a free hotspot and 30 Gigabytes of free data.

"At T-Mobile, the strength of our network speaks for itself... we're so confident in it, we're giving people a free 30-day test drive," boasts T-Mobile CEO John Legere in a release from the company.

The big question, though, is whether the customers who sign up for those free offers end up actually spending money with the provider at some point down the road. And though there is precious little hard data on the topic, there are indications that an offer of free wireless is one that must be carefully handled to be successful.

Further, handling it well appears critically important. The American Customer Satisfaction Index recently reported that 70% of wireless customers spent between $1 and $100 on their wireless bill, but they accounted for no more than 35% of carriers' revenue. Meanwhile, customers who spent $101-$150 and $250-$500 made up only 18% of the customer base, but more than 36% of carriers' total revenue.

Freemium in wireless
The wireless industry isn't the first to experiment with the "freemium" business model, in which some things are provided for free with the hope that a customer will decide to upgrade or spend money on other things later.

The Internet has proven to be a breeding ground for freemium iterations. For example, most iOS and Android games offer a free experience to entice users into the game, with the hopes that at least some of those gamers end up spending money on premium upgrades (like faster cars or different characters) later.

It's that free-to-paid conversion rate that's the key element in any freemium model. That rate can range from 4% for Dropbox to 26% for Spotify.

Perhaps the clearest look into how the freemium model works in the wireless industry comes from FreedomPop, an MVNO that launched almost a decade ago with an offer of some free data every month alongside premium upgrades, services and top-ups. The company recently split its consumer-facing retail offering, which counted around 1.5 million total customers, into two separate pieces and sold them to two different companies: Red Pocket Mobile and Tucows' Ting. The results are telling. 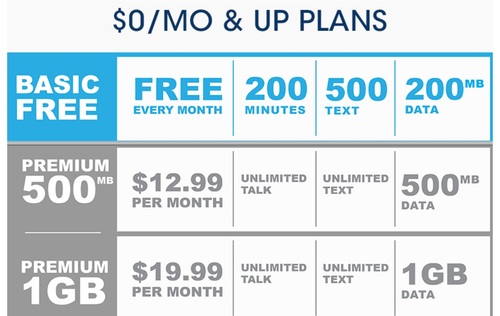 A tale of two FreedomPops
In the company's most recent earnings call with investors, Tucows CEO Elliot Noss said Ting acquired 150,000 FreedomPop customers using Sprint's network for $3.6 million. He said just 25,000 of those customers were spending significant amounts of money on the service. That implies a free-to-paid conversion rate of just 16%.

Not surprisingly, Noss said Tucows has no interest in moving into the freemium business and instead is working to sign those customers onto its existing Ting-branded MVNO.

However, that's not the whole story.

FreedomPop's Stephen Stokols said that Ting acquired roughly 10% of FreedomPop's total retail customer base. Red Pocket bought the rest, as well as FreedomPop's brand and retail operation, for a reported "high eight-figure" sum. Most of Red Pocket's FreedomPop customers were on AT&T's network. Stokols said that, just before FreedomPop split up and sold its retail operation, the company had 44% of its customers spending money on various top-ups and premium offerings. He said those customers who were spending money with the service doled out an average of $14 per month.

Joshua Gordon, founder and CEO of Red Pocket Mobile, said those metrics roughly align with what Red Pocket is seeing among customers it purchased from FreedomPop. However, he declined to provide any specific figures for Red Pocket's new FreedomPop customers. Importantly, Red Pocket plans to continue to pursue the freemium model that FreedomPop used.

Further, Gordon argued that Ting's pursuit of FreedomPop's customers is "not optimal." He said Ting is requiring its FreedomPop customers to re-enter their credit card information in order to sign up for Ting-branded service -- a stumbling block to any customer migration effort.

A Ting representative declined to respond to questions about its handling of the FreedomPop customers it purchased.

Although Red Pocket now owns the FreedomPop brand, Stokols said the company that created the brand, STS Media, continues to pursue its "carrier in the cloud" SaaS (software as a service) business, which sprang from the FreedomPop retail operation. He said the business sells customer acquisition and management services to enterprise companies in sectors such as telecom and banking. Stokols said the operation counts around two dozen customers such as insurance company Prudential Financial and telecom operator Dish Network in Mexico, and is growing revenues and profits.

Sprint's free year of service
Although FreedomPop has boasted of success in the freemium area, Sprint hasn't. In its filings last year with the FCC in relation to its proposed merger with T-Mobile, Sprint said its offer of a free year of service was mostly unsuccessful.

"Sprint also launched a campaign aimed at Verizon customers offering 12 months of free 'Sprint Unlimited' service, including unlimited talk, text messaging, 4G LTE data, HD streaming video, and 10 gigabytes of data per line for mobile hotspot access each month," the carrier wrote. "Sprint has continuously promoted prices that saved Verizon customers hundreds of dollars a year (e.g., even promotions offering 50% off Verizon prices), yet Verizon customers who port in to Sprint tend to port back to Verizon at a significantly higher rate than Sprint's other competitors. Thus, the savings through price discounting has not been enough to offset either real or perceived network differences. The net results show in almost every month of 2017 and 2018 Sprint lost more customers to Verizon than it gained from Verizon."

However, Sprint's comments should be taken with a grain of salt. The company's statements about its free year of service were part of a broader effort by the operator to convince state and federal regulators that it wasn't able to compete effectively in the wireless industry and, therefore, reasoned that its proposed merger with T-Mobile should be approved.

unbearable 9/6/2019 | 12:25:57 PM
The Whole Story FP is/was probably the most deceptive firm to come along since the butchering industry got scales to put their collective thumbs upon.

I'd much rather pay a competitive price than subscribe to a service that sets traps in every "free" offering then delivers a horrid voip-based connection, while cleverly changing the ToS at midnight every third week.

Ting and Red Pocket have their issues, including being overly celebrated relative to the value they deliver, but they're still vastly more transparent than FP could ever be.

I'd rather see Ting focus on expanding their FTTH niche than worry about their own gimmickry pay-go plans that appear competitive until you add the "device fee(s)".