Get Off My Wireline Lawn!

You can't report about any industry for 33 years and not chronicle dramatic change, even one accused of being as slow-moving as telecom often is. But there are rarely signposts for that change.

On what day did you get -- or send -- your last fax? When did keynote speakers stop referencing their kids' behavior to explain the explosion of in-home devices? (Also, if you are still doing this, it's time to stop.) When did we stop expecting our landline phones to work after a power outage? Or caring when they didn't?

All of those transitions happened with little notice, but each was some kind of landmark. Today, we got a signpost, a clear signal of a significant shift in consumer behavior in the US with a survey conducted by the Internet Innovation Alliance (IIA). The survey shows that consumers don't really distinguish between fixed and mobile broadband service, seeing each as capable of supporting "bandwidth-intensive activities" such as streaming video and reliable enough for tasks like homework and job applications. 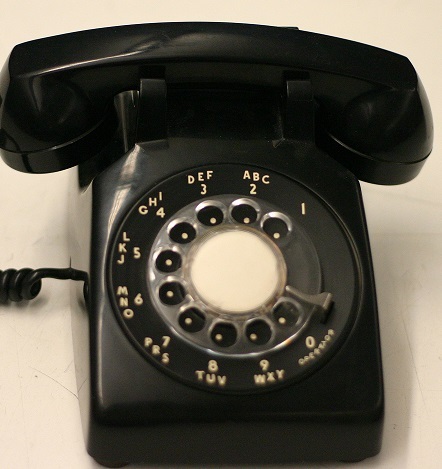 No, this isn't my phone.

And according to the IIA and former Congressman Rick Boucher of Virginia, who presented the results in a press conference today, the only reason some folks are hanging onto their wireline broadband Internet service is that it comes packaged with video and voice, and it's more costly or too much trouble to shift. (You can read the entire report here.)

The numbers are pretty straightforward: 26% prefer cable broadband, 23% prefer mobile, 20% have no preference, 14% prefer fiber, 7% chose DSL and 3% opted for satellite. So right now, there is a slight preference for wireline, but that pace of the shift has accelerated over the last two years. And while younger folks trended mobile, there was a shift across all demographic groups. Even us old farts are becoming more dependent on our wireless devices.

Clearly, those preferences were framed by what's available to a given consumer -- as Boucher conceded -- because no one would otherwise prefer DSL over fiber or, for that matter, cable over fiber. (Says someone who had fiber and was forced back to cable by a move.) But the shifting preference to wireless basically trumps everything as it becomes universally available.

Certainly, this speaks to how pervasive LTE is fast and reliable -- so much so that not only are consumers happy with its broadband capabilities but it's become a popular back-up option for business services. Clearly, the arrival of 5G could signal the displacement of wireline access altogether for many people.

What this trend also speaks to, however, is how we as consumers have changed and how our expectations have shifted. Use a wireless connection often enough and you stop caring so much about voice quality or having to occasionally redial, as long as you can make the connection. Discover that texts and emails get through to people when calls sometimes don't and you stop thinking you need to talk to someone to communicate. Enjoy videos-on-demand in the airport and the screen size isn't an issue.

When your power goes down, you reach for the cellphone. If you need to send a document, scan it (or take a picture) and email it. As for reaching 911 in an emergency, as my colleague Phil Harvey put it, "We've gone from dial tone to 'Alexa, call the cops.'"

It's almost quaint now to think of the years that fiber-to-the-home was constrained by the lack of a networking powering option or the fact that the early FTTH and VoIP deployments came with backup batteries. The time spent fretting over call quality also seems to have been time wasted. It seems where convenience and instant gratification are factors, there's a whole lot we're willing to give up. (See Just Connect, Already.)

Carol Wilson 7/18/2018 | 12:27:49 PM
Re: Hold the phone! I think the economic decision you describe is exactly the one many people are making, especially younger folks.

Given where wages are, relative to the cost-of-living, I don't see the shift reversing. One current barrier to cutting the broadband cord today is the fact Internet comes in a voice-data-TV package and many people are reluctant to make massive changes.  But if they can save siginificant money, I think they're going to do that in increasing numbers.

The assumption has been that consumers would prefer a data-TV package or a data only service and I think that will be true for a lot of folks. But this survey seems to indicate that wireline broadband isn't as essential to some consumers as we thought.
Reply | Post Message | MESSAGES LIST | START A BOARD


I think the biggest challenge in Consumer Broadband is that we now have relatively large pipes compared to the actual usage in the wireline world.  Given the emphasis on Mobile at most formerly wireline first carriers,  From their standpoint, they make a lot of extra money per voiceline than they do on wireline.  The challenge really is to compare total bills and then see where the value is.

For example, my Wireless plan has 2 phones on it and because I get a senior discount costs me $77/month.  My cable internet goes for $99/month.  The question becomes what applications require the greater bandwidth of my cable system.  The truth is none.  If it were not for the cost of actual unlimited broadband, I would have no use for cable and could go to broadband wireless exclusively.

I agree with what you are saying, I think what this notes is a significant shift away from dependence on the wireline piece.

And I suspect most households that have consumption of HD video by multiple devices are, in fact, wired households and will remain so.

But the fact that consumers perceive mobile broadband as a functional substitute in significant numbers is not something the industry can ignore.  Wireline voice services (even VoIP) stayed too costly for too long, which only encouraged the shift to cut the cord on voice.

This is an indication that the same thing could happen to part of the wired broadband market.

That doesn't mean we don't need wired infrastructure, we'll definitely need more of that for 5G to be pervasive.

You make several good points. For clarification, the IIA's "corporate agenda" is to influence the FCC, by making the agency include mobile broadband alongside wired broadband in its reports to Congress.

It could be that consumers are confused and think that when they are using their cellphones in their homes that they are always on mobile data when in fact, they are connecting via WiFi to a wired broadband link.

But the fact that they are increasingly using phones and mobile devices to watch videos and do things like job applications and homework is a significant trend, nonetheless. And I think it is the harbinger of things to come when 5G finally arrives ubiquitously, which won't be for several years.

I think that Wireline and Wireless are not mutually exclusive.  Especially for now.

How many home users use Fixed Wireless or Mobile Only strategies?  For high volume consumption of HD video on multiple devices, these might be too expensive.

Would users "prefer" to use completely mobile?  Probably...if the cost was right and we had wireline performance.  We don't.

Kevin Mitchell 7/17/2018 | 3:50:40 PM
Hold the phone! For a single person on a single device, I get that "Consumers See Mobile and Fixed Broadband as the Same." But, once you have a household of devices and people simultaneously using those devices, there is no sameness.

There's no surprise that the younger demographics are adopting a wireless only lifestyle, for now. A longitudinal study is needed to see if it stays that way. Or shows how people shift broadband preferences over time (when given a choice).

IIA is using wireless VOICE service adoption as the basis on a wireless broadband as the same as fixed. Plus, I think survey respondents can easily confuse "prefer to use mobile" as a DEVICE not the BROADBAND type. Preferring to use mobile can mean on WiFi at home, work or coffee shop.