China Mobile has signaled its growing ambition on the international stage with the launch of a mobile service in the UK.

Through a wholesale deal with UK telecom incumbent BT Group plc (NYSE: BT; London: BTA), the operator will target Chinese immigrants in the UK, including overseas students, as well as Chinese consumers traveling to the UK for holiday or business purposes.

While the target market is relatively small, CMLink, as the UK service will be called, represents China Mobile's first move outside China as a so-called mobile virtual network operator (MVNO) and hints at bigger plans in overseas markets.

During a press conference in London this morning, executives from China Mobile Communications Corp. drew attention to the operator's growing international presence and partnership community. 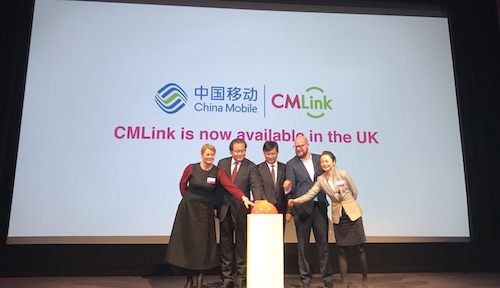 Representatives from China Mobile, BT and the City of London Mayor's office gather at a press event in London to launch CMLink.

"This is the first overseas MVNO business of China Mobile, which is a major step forward in plans to become more global," said Li Feng, the chairman and CEO of China Mobile International, the telco's international division.

CMLink will rent capacity on the EE network, the mobile operator that BT acquired last year, and market a range of pay-as-you-go services to Chinese consumers in the UK.

Customers will be able to make calls to China Mobile's 880 million customers in China entirely free of charge, the operator says. There will also be no roaming charges for customers traveling to China, Hong Kong or throughout the European Union, it has promised.

The service looks attractively priced and will allow customers to purchase "auto renewal monthly packs" that include generous allocations of data megabytes. For the top-tier package costing £18 ($24) per month, for example, a user would get 2,000 voice minutes, unlimited texts and nine gigabytes of data.

However, for each month a customer sticks with the service, his or her data allowance will be increased by 5% up to a maximum of 200% more data (so 27 gigabytes on the premium, £18-a-month plan).

China Mobile estimates there are about 433,000 "British-Chinese" in the UK today and that 82,000 Chinese nationals were studying in the country in the first half of 2017. The UK also then saw 115,000 visitors from China, 47% more than a year earlier, according to the telco.

The service launch could put some pressure on the retail operations of the UK's mobile operators, which include Hong Kong's 3, Telefónica UK Ltd. (trading under the O2 brand) and Vodafone Group plc (NYSE: VOD), besides BT-owned EE.

There may also be some nervousness about the prospect of China Mobile broadening its marketing efforts to encompass non-Chinese consumers. The UK mobile market is already highly competitive, and home to several MVNOs, but China Mobile clearly has the muscle to undercut rivals on price. It might also see an opportunity to provide new types of mobile service based on its R&D activities in China.

The UK MVNO business could also be a springboard for the launch of similar services in other European markets where there are large numbers of Chinese residents and travelers.

Notwithstanding some concern about the impact CMLink might have on the retail mobile market, the deal seems a good one for BT, which has had a difficult year and complained about tough conditions in several areas. The UK telco, which boasts the country's most extensive 4G network, has previously fought off wholesale rivals to land several high-profile MVNO contracts.

London's recently appointed chief digital officer was also quick to laud the deal as a sign the UK remains open for business despite last year's "Brexit" decision to leave the European Union. "London is open and has always been international and outward-looking," said Theo Blackwell at today's press event. "Cities arguably have a bigger role in promoting innovation than national governments."