The last time Hewlett Packard Enterprise (HPE) conceived an "optimization" scheme, nearly one in ten jobs disappeared the following year. That was back in 2017, when the IT company, which then employed about 66,000 people, according to filings with the US Securities and Exchange Commission, aimed to reduce costs by $800 million a year. Struck badly by coronavirus, HPE is optimizing once again. Just as before, it seeks an $800 million annual reduction. Thousands of jobs are likely to go.

Prompting the latest cutbacks is a dire set of financial results for HPE's February-to-April quarter (HPE's fiscal second). Revenues dropped 16% year-on-year, to about $6 billion. That triggered a net loss of $821 million, compared with a profit of $419 million a year earlier. "This pandemic is unlike any other crisis we faced and it has brought significant economic disruption," said CEO Antonio Neri on a call with analysts, according to a Seeking Alpha transcript. "Businesses and communities are struggling, supply chain productivity continues to be significantly constrained and the demand environment is uneven." 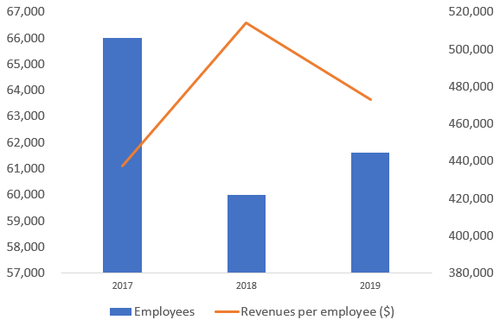 Much like Cisco, HPE was hammered partly because it is still overly reliant on one-off product sales rather than recurring service revenues. Component shortages and other supply chain disruptions were blamed largely for a 19% drop in sales of compute products, which accounted for about 43% of total business in the quarter. The same issues affected HPE's large storage unit, which recorded a 16% fall in sales, to $1.1 billion. At the division responsible for what HPE calls "high-performance compute and mission-critical systems," revenues were down 18%, to $589 million. Some installations were simply not possible during the pandemic, said HPE.

The declines were less severe at other, smaller units, including some with a services focus, and there were a few jewels in the darkness. HPE Greenlake, the newish part of HPE that sells everything "as-a-Service" (aaS), witnessed 17% growth in its annualized revenue run rate, to $520 million, said Neri. "We continued to see acceleration in this very profitable strategic business and are seeing large deals come in," he told analysts.

HPE has struggled with a pivot to the cloud, though, and Greenlake still accounts for only a small fraction of total revenues. If the latest program of cuts has been forced on his company by the pandemic, Neri is presenting it as an opportunity to speed up HPE's transition to a services model and prepare for an entirely different modus operandi. "It's right size our cost structure to the new normal," he said. "I believe this will cause incredible structural impact in the way people are going to work. And my expectation is that at least 50% of our employees will never come back to an office."

That alone points to major savings related to company real estate, but many employees will probably not come back to HPE at all. Its new three-year plan envisages gross annual savings of at least $1 billion through changes to the workforce, real-estate footprint and business processes. By the end of the 2022 fiscal year, it aims to have cut net annual expenses by $800 million, compared with the 2019 fiscal year.

Paying for all this, however, will cost between $1 billion and $1.3 billion in cash funding over the next three years, says the company. That could affect targets for cash flow, while the "aaS" transition could ultimately turn HPE into a smaller company from a sales perspective. "We are rightsizing the business to what is potentially a new revenue base," said Tarek Robbiati, HPE's chief financial officer. "And it's too early to tell whether that new revenue base will come back to the pre-pandemic revenue levels."

Investors are understandably disappointed and nervous, sending HPE's share price down 7.3% during pre-market trading in New York. At $10.46, the company's stock is down 40% since November last year. Coronavirus has proven to be a catalyst for all sorts of developments, from home working and online shopping to the Zoom-enabled drinks session with friends. And while a shift to the cloud belongs in that list on the business side, HPE failed to become a significant "aaS" player when times were good. Making that transition while sales and profits are squeezed will not be easy.