How and why Verizon acquired TracFone

With the stroke of a pen, Verizon is moving from last place to first place in the US prepaid market.

And that's important considering GlobalData estimates that around one out of every four Americans subscribes to a prepaid plan.

And though Verizon's proposed acquisition of America Movil's TracFone  valued at almost $7 billion  isn't expected to close for another year or so, the transaction nonetheless raises a number of questions about Verizon's reasoning.

Importantly, Verizon CEO Hans Vestberg said that the pandemic wasn't the catalyst. He also said it's not a reaction to Dish Network, which in July purchased 12% of the prepaid market with its Boost Mobile transaction.

"That was never the driver," Vestberg said Tuesday at an investor event.

Instead, Vestberg explained that Verizon began its discussions with America Movil late last year, before COVID-19 began spreading and before Dish officially entered the US wireless market

A good financial deal
So what motivated Vestberg to put pen to paper? "It's easy to see why Verizon wanted TracFone," wrote the financial analysts at MoffettNathanson in a note to investors Monday. "TracFone's razor-thin (10%-ish) margins will immediately spike higher when those customers are put onto Verizon's own network."

Other financial analysts agreed. "The deal logic of a TracFone purchase is simple," wrote the analysts at LightShed Partners in a note to investors posted Monday. "The facilities-based buyer can achieve additional scale and quickly realize synergies by moving traffic to their network, a technological advantage of how TracFone operates. This can add tens of percentage points to the margin for the buyer and strike a blow to the wholesale revenue of its competitors. In addition, America Movil has long traded at or below 5x EBITDA [earnings before interest, taxes, depreciation, and amortization], so the purchase could be completed at an attractive premium multiple for the seller, but given the easily achieved synergies, dramatically drop the post-synergy multiple to the buyer."

Vestberg himself made many of the same points Tuesday, noting that Verizon can extract efficiencies by moving TracFone's customers onto Verizon's back-office systems.

"This deal was always obvious to us and therefore a lost opportunity for T-Mobile to take away an estimated $2.1 billion of wholesale revenue from Verizon and prevent it from becoming a real competitor in prepaid," added the LightShed analysts.

Two to tango
But which company first popped the question? Some financial analysts believe Verizon initially approached America Movil about the purchase.

"We believe TracFone has been open to a sale for years, especially after the untimely death of its longtime leader and great person, FJ Pollack," wrote the LightShed analysts.

They added that Verizon's relatively new CEO, Vestberg, clearly has a different view of the prepaid market than his predecessor.

However, the question of which company approached which might not be the most important one to ask.

"To us, what's perhaps more interesting than the fact that Verizon is buying is that America Movil is selling," the MoffettNathanson analysts wrote. "There was a time when we thought it inevitable that they [America Movil] would pursue the strategy of putting their subscribers onto an owned and operated network themselves. When they passed on acquiring, or even considering acquiring, MetroPCS and Leap Wireless some years ago, we assumed that their appetite to continue to invest in the US market had soured. Still, it is an interesting commentary on the market that America Movil has decided to exit so quickly after the market shifted from being a four-player to what is now a three-player market," following T-Mobile's acquisition of Sprint.

Light Reading reported last month that Consumer Cellular  one of the nation's largest MVNOs with more than 3 million customers  is in discussions with other companies for a potential sale, according to two people familiar with the issue. However, the discussions appear to be in the early stages, and may not result in a transaction.

Next steps
So what is Verizon going to do with TracFone? Nothing much, at least initially, according to Vestberg. He reiterated that Verizon would retain TracFone's gaggle of brands, and would work to upsell those customers on services like 5G and fixed wireless. 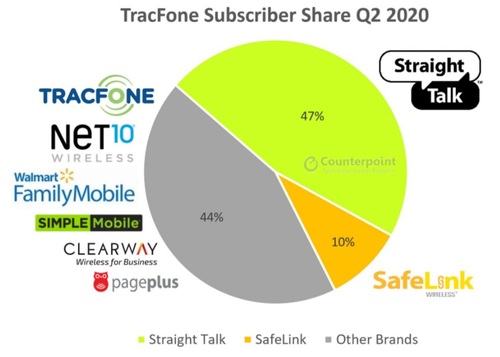 In keeping TracFone's brands, Verizon is able to go after a cheaper market segment without tarnishing the premium sheen it has worked to apply to its main brand. That strategy directly aligns with AT&T's prepaid effort, which centers on its Cricket Wireless brand, as well as T-Mobile's "Metro by T-Mobile" prepaid brand.

Further, Vesterg said that the addition of millions of new TracFone customers won't impact Verizon's network. He said the company does not plan to increase its network spending in order to handle any new loads.

However, the financial analysts at Cowen pointed out in a note to investors that Verizon's TracFone deal won't close until after the C-band spectrum auction, which ought to give Verizon time to obtain plenty of spectrum to handle additional customers and traffic.

A tale of two carriers
Finally, Verizon's TracFone deal further highlights the widening strategic divide between Verizon and AT&T. One company is focusing squarely on selling network access, while the other is attempting to leverage its network into the media sector.

For example, AT&T's CEO John Stankey spoke almost immediately after Vestberg Tuesday at an investor event, and he had almost nothing to say about prepaid or 5G. He spoke at length about HBO Max.

"Verizon knows its place and is playing to its strengths  that is staying narrowly focused on its wireless business and more specifically layering incremental scale on its network-as-a-service / platform strategy," wrote the financial analysts at Cowen.