Internet data usage was expected to balloon amid a COVID-19 pandemic that has forced millions to work and play from home. The data is now rolling and supporting those projections.

In rural areas, OpenVault found that downstream usage rose 53.3% and upstream usage surged 41.9% on March 16 versus the previous Monday.

Mark Trudeau, OpenVault's CEO, noted that Internet usage typically falls off a bit in March, but the latest batch of data illustrates that it is picking up.

This chart from OpenVault illustrates the difference in data usage in January 2020 compared to March 16 and 17, showing a rise in daytime usage and a general increase in usage across the board. 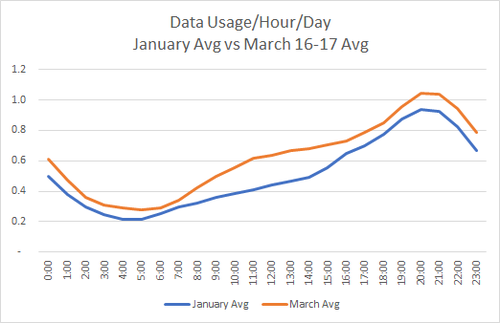 OpenVault's data lines up with what some network engineers expected to see this week.

"The peak will stretch longer throughout the day," Tom Cloonan, chief technology officer, broadband networks, at CommScope, said in a recent interview when asked how cable networks are positioned to deal with the surge in residential traffic expected from the COVID-19 crisis. "Networks are designed to work during the peak busy hour, from 8 p.m. to 11 p.m., so they should work very well with all the work-at-home people, between 8 a.m. and 6 p.m."

OpenVault didn't break down data usage by specific apps, but videoconferencing, a service that can stress both upstream and downstream capacity, was expected to pick up this week.

Verizon sees surge in online gaming
A new data usage report issued this week by Verizon takes a closer look at which types of apps and services are climbing the charts this week as more customers work, study and play at home.

Verizon, which is adding capacity in pockets where it sees a significant surge in usage, said it had seen a 75% increase in gaming this week during peak hours versus last week, along with a 12% boost in video streaming and a 20% rise in overall web traffic. Meanwhile, social media usage was surprisingly flat, even during peak usage hours.

*Based on peak data hour usage week over week.
*Usage is expected to fluctuate over time; we could see new applications emerge based on customer usage patterns as more people telecommute and more students are at home.

"We're in an unprecedented situation," Kyle Malady, CTO for Verizon, said in a release. "We continually evaluate peak data usage times and build our networks to stay ahead of that demand. While it is not clear yet how having millions of additional people working from home will impact usage patterns, we remain ready to address changes in demand, if needed."

Consumers connecting more devices to home nets
Additionally, Plume, a provider of whole home Wi-Fi and smart home monitoring and analytics systems, said it had seen a massive rise in the number of devices connected to home networks by the end of Monday (March 16).

Broken down by some specific markets, Plume said that number rose 90.6% in Seattle, 85.3% in the San Francisco/Bay Area, 73.4% in Philadelphia, 59.4% in New York and 51.8% in Los Angeles. Those figures were generated from data pulled from the Plume Cloud, which manages about 650 million devices across 14 million homes.

Plume has also set up a Work/Learn From Home dashboard it is updating each day at 11 a.m ET. According to Plume's data, the number of active connected devices in the home started to accelerate on Friday, March 12 across all monitored markets.

While Internet usage will fluctuate and vary by market and by individual ISP, the general consensus from The Internet Society is that the world's core Internet infrastructure providers should "easily absorb" the increase in traffic and demand, especially if this increase is somewhat gradual over the coming weeks and months.

Meanwhile, to help cope with the anticipated demands on home broadband during the COVID-19 crisis, almost 200 US broadband service providers have backed FCC Chairman Ajit Pai's "Keep Americans Connected Pledge." That 60-day pledge calls on ISPs to suspend service terminations for customers who can't pay their bills, to waive late fees and to open up Wi-Fi hotspots.