The GSM Association came under sustained fire at the start of the year for its apparent indecisiveness on the cancellation of MWC Barcelona. This huge tradeshow attracts more than 100,000 people annually and is the group's biggest revenue earner.

In fairness to the GSMA, it was caught between some who wrongly thought canceling the event was a panicky response to another Asian virus (few are saying that now) and others who felt not canceling MWC was irresponsible and greedy.

But the GSMA leadership was not exactly Churchillian during the early days of the crisis, and its reputation undoubtedly suffered.

Determined to avoid any repeat, it today dropped a mini bombshell for anyone hoping 2021 would mean a resumption of the old normal. 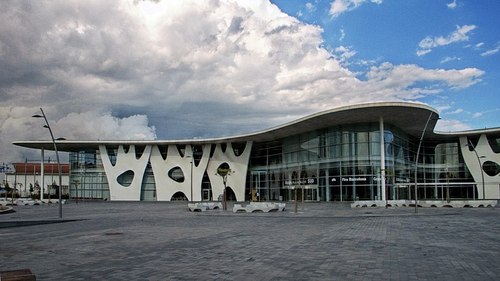 The Fira de Barcelona, where MWC used to happen.

Nearly half a year in advance of MWC 2021, the GSMA has postponed the event by three months.

It is now scheduled to run from June 28 to July 1, with MWC Shanghai, a spin-off that usually takes place later in the year, penciled in for February 23 to 25.

Financial squeeze
The GSMA has already suffered mightily as a result of MWC's cancellation this year.

In June, Telecoms.com, Light Reading's sister publication, revealed the GSMA was planning job cuts that would affect 20% of its workforce due to the 2019 sales slump.

Companies pay generously for the right to flaunt their wares on the industry's most important technology catwalk.

In March, the GSMA was forced to offer a compensation package to exhibitors affected by the show's 2020 cancellation.

For an exhibitor spending more than £5,000, the same credits were on offer, but the cash refund was limited to 50%.

There was a sting in the tail, though: Companies that withdrew before the show's official cancellation were not given the option of a cash refund. Only credits were available.

Mobile World Live, the GSMA's own news title, today reported that 78% of the top 100 exhibitors, including Ericsson, Huawei and Nokia, have already confirmed participation at next year's Barcelona event.

The show must go on?
Assuming it happens at all, that is.

The GSMA has calculated that running its show next February would not be feasible. And yet it believes conditions will have sufficiently improved just four months later to pack tens of thousands of international travelers indoors.

Back in March, few would have thought coronavirus could threaten the cancellation of next year's MWC. Now it seems entirely conceivable.

COVID-19 is not in retreat. The latest data shows that close to 1 million deaths have now been attributed to it. Almost 32 million cases have been recorded worldwide.

Those figures are up from just 45,000 infections and about 1,000 deaths in mid-February, when major exhibitors, including Ericsson and Nokia, had decided the risks were too great.

The real danger for the GSMA, and similar organizations, is that its exhibitors fast adapt to a world without the mega tradeshow.

Even before the pandemic, some were questioning the value of attending MWC Barcelona. To its fiercest critics, it had become an endurance event without an obvious payoff, a bewildering, four-day assault on the senses for hungover executives.

For many regulars, it has remained the venue where deals are done and partnerships formed, all against the boozy backdrop of Barcelona's bars and restaurants.

Ultimately, those hospitality venues will probably miss the show more than many telecom firms. Plenty of 5G activity has happened this year in the absence of MWC.

Show or no show, any chief technology officer building a 5G network needs a radio vendor, a software core and a business support system.

Some friendly banter over a tapas lunch might have sealed a few contracts last year.

In the connected world the telecom industry has helped to build, more humdrum selection criteria may have to replace it.