Quibi seems to be zigging while the rest of the world is zagging.

The premium, short-form service tailored for mobile phones and on-the-go viewers launched Monday in the US and Canada just as tens of millions of consumers happen to be hunkered down at home watching TV during the COVID-19 crisis.

The biggest quibble with Quibi thus far isn't about the service's content but rather its inability to stream to the big screen  either through a dedicated app or by allowing users to cast content from a smartphone to the TV. 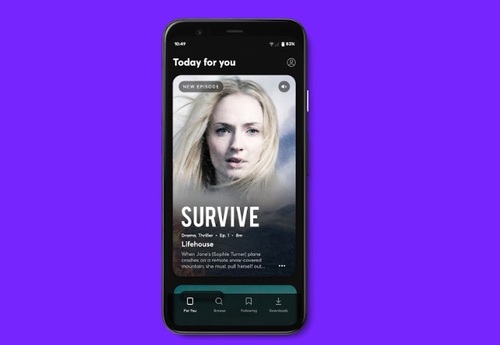 Survive, a drama starring Sophie Turner, is among the titles available on Quibi at launch.

Quibi, a service founded by Hollywood icon Jeffrey Katzenberg, is initially laser-focused on an optimized mobile experience and its use of a proprietary "Turnstyle" technique that seamlessly maintains full-screen viewing as content is watched on smartphones in portrait or landscape mode.

But the absence of any support for streaming to TV screens might be short-lived, as Quibi CEO Meg Whitman told Variety that casting capabilities are expected to be added to the service's mobile app.

Some industry observers believe the consumer backlash pertaining to Quibi's shunning of the TV screen could speed up that plan.

"It's still my belief that they will adjust" and rapidly move to support TV-connected devices, said Colin Dixon, founder and chief analyst at nScreenMedia.

And despite Quibi's focus on the smartphone, research shows that most consumers prefer to watch premium content on a TV screen when given the choice.

Based on a recent survey of 6,400 US households, Leichtman Research Group found that the vast majority of consumers – about 90% – say they stream Netflix, Hulu and Disney+ to the TV whenever they use those services. The LRG study also found that consumers stream virtual multichannel video programming distributor (vMVPD) services, such as Sling TV or YouTube TV, to the television 87% of the time, up from 78% about two years ago.

Subscription streaming services "are increasingly watched at home, and it's increasingly on the television set," Bruce Leichtman, LRG's president and principal analyst, said.

Update: Dan Rayburn, principal analyst at Frost & Sullivan, has a different view, holding that Quibi is being unfairly criticized for sticking to its mission. In addition to referring to Quibi's launch as "flawless" in the headline of this blog post, he also believes the negative press about Quibi's lack of a TV app is "unjustified" because the service is fulfilling its plan to be a mobile-focused service and not trying to be a TV app today.

"Giving Quibi a negative review because the content isn't for viewing on a big screen is like complaining a motorcycle is a bad means of transportation because it can't carry four people like a car. Quibi was made for a specific type of viewing, for a very specific device," he wrote.

Staking out mobile territory
With its mobile focus, Quibi is hoping to connect with young audiences that are more apt to use smartphones to snack on premium content and succeed where other similar types of mobile-centric, video ventures  such as Verizon's Go90  failed.

"Quibi's trying to stake out territory that is greenfield" using a mobile-centric, subscription-based offering that zeroes in on high-quality fare, Leichtman said. But he questions whether the audience Quibi seeks will be willing to pay. Quibi's overall concept and model was already in question well before the COVID-19 crisis hit, he said.

"This is a big, interesting experiment they are trying," said Brett Sappington, vice president at Interpret, where he heads up global video entertainment research. He agrees that that consumers have generally been unwilling to pay for short-form content. "Their success and failure will be about adoption by mobile-first millennials. I think they may be challenged to move beyond that."

But rather than locking horns with major, general entertainment subscription VoD services, such as Netflix, Amazon and Disney+, or with pay-TV services, Quibi's competition is expected to originate with other, often free, apps that draw consumer attention while they are on their smartphones, such as YouTube, TikTok, Instagram and Facebook.

Quibi costs $4.99 per month with ads and $7.99 per month without ads, but it is lessening the financial blow and offering consumers time to give the service a lengthy try via 90-day free trials. Some T-Mobile customers are getting Quibi free for a year.

More challenges ahead
While the free trials should give consumers reason to sign up and kick the tires, the lack of a completely free, ad-based version of the service could become a liability in later months if consumers continue to tighten their belts and reduce discretionary spending because of the pandemic.

And the need to keep consumers hooked will also require Quibi to keep churning out new and interesting content.

Quibi expects to release 175 new original shows during its first year, a total that includes a mix of scripted, unscripted and daily "essentials" (e.g., news and information, weather). Quibi was asked if the effects of the new coronavirus pandemic on content production will affect its anticipated content slate, but it has not responded as of this writing.

Rich Greenfield, analyst with LightShed Partners, noted in this blog post that he believes Quibi has "more than enough fresh content stockpiled to make it through the end of calendar 2020."

While Quibi has not revealed exactly how much content it already has in the can, a slowdown in new content production due to the spread of COVID-19, represents "the biggest threat" to Quibi in the near-term as it tries to establish a strong connection with audiences with new, star-studded TV shows and movies before free trials expire, Dixon said.

While not an apples-to-apples comparison, Netflix is not nearly as exposed to that kind of pressure because it already has an established audience and has been a "go-to" service for consumers during the current virus-induced lockdown period, Dixon said, making note of the consumer buzz that's been heaped upon Netflix original Tiger King. "If Quibi doesn't have a lot of new content flowing through in a couple of months, it could be a disaster."

Quibi will need plenty of content out of the chute and will need to keep its slate stocked if it's to catch on with audiences early on and maintain its value proposition, Sappington said.

On that point, he notes that a lack of new and interesting content has been a core criticism of two relatively new SVoD products  Disney+ and Apple TV+.

But Quibi's additional challenge is to refill its cupboard constantly with short-form episodes that are less than 10 minutes in length. "They'll need a compelling, huge amount of content that can always be discovered. That could be a real challenge for them," Sappington said.

Leichtman, however, believes that the potential production issue poses less of a threat to Quibi. "I would say that's a tertiary challenge for them," he said. "Quibi's core concept, with its pricing, is the bigger challenge."

this is a very appreciative content and very helpful to us other tha that if you face any issues or detect any problems in hp setup then go to  .setup to fix this