Having a face-to-face work meeting? You're starting to become a rarity, and the videoconferencing giants know it.

The widespread coronavirus-induced "work from home" directive, now imposed or suggested in many countries, looks certain to test the resiliency of communications networks and applications in the coming months, with digital collaboration platforms in the immediate front line as in-person meetings make way for multi-person, multimedia online meetings.

While work-at-home directives have become more widespread in the past few days, the collaboration platforms have been preparing for a surge in use for the past few weeks. Mattias Fridström, chief evangelist at global wholesale network operator Telia Carrier, told Light Reading late last week that "all the major videoconferencing companies such as Webex, and they all use our network, want upgrades  in the past 10 days they have all asked for capacity upgrades."

It seems that's to cope with an existing uptick as well as anticipated use: Cisco CEO Chuck Robbins told CNBC Tuesday morning that its Webex platform had seen a surge in activity this month.

But that doesn't mean the platforms are necessarily coping: Microsoft's Teams system has been struggling to cope, according to the volume of service quality complaints logged by Downtdetector. (This user can attest to the problems experienced with Microsoft's platform, based on an audio outage suffered Monday during a Teams-based company announcement accessed initially by more than 100 people.)

And it isn't alone: Webex also attracted a spike of user complaints early Tuesday, as did another conferencing service, Zoom.

These service issues could be caused by a number of factors, of course, and don't necessarily mean the public Internet is on the brink of collapse: Even with the current uptick in traffic of all types, including video and gaming, that outcome is highly unlikely, according to security and Web infrastructure specialist Cloudflare.

In a blog posted Tuesday, Cloudflare engineer Louis Poinsignon noted the surges in traffic that various Internet Exchange Points had recorded this month  a 40% increase at the Milan exchange on March 9, the day that Italy announced the national quarantine, for example. In general, Italy has experienced a 20% to 40% increase in daily data traffic volumes since that date: 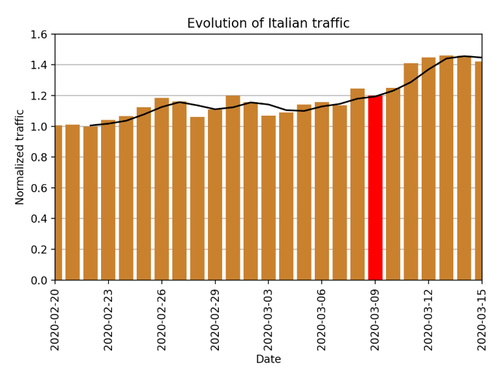 Source: Cloudflare. The red day is when Italy imposed a nationwide quarantine.

But Poinsignon is confident the Internet can cope: "The core of the Internet is robust. Traffic is shifting from corporate and university networks to residential broadband, but the Internet was designed for change," he concludes.

In the meantime, conferencing and collaboration platforms are where the action is, and while the likes of Webex and Teams will already have significant corporate customer bases tied to contracts that make it hard to churn, many small and midsized companies may now be seeking a service for the first time, opening up an opportunity for new entrants.

One of those is Ribbon Communications, which Tuesday launched its cloud-based [email protected] platform, designed to provide "advanced remote working capabilities to enterprises and contact centers of any size."

It's a safe bet that Ribbon won't be the only one seeking to capitalize on what could become the new norm.

Sterling Perrin 3/18/2020 | 10:31:12 AM
Something to be said for reliability I've used all of the major collaborative platforms over the past 4 weeks, and to different degrees, there have been issues with every single on of them - some an annoyance and some a complete crash.

I am very grateful right now that I have kept a landline phone for work. There is something to be said for 5 nines reliability. Ironically for nearly 2 years AT&T has done everything they can to get me to drop my landline, including charging a ridiculous price for it.