Helmut Reisinger, the newish boss of Orange Business Services, can afford to be chirpier than his main European rivals. Deutsche Telekom's T-Systems unit is slashing thousands of jobs as it tries to inflate profits. BT's Global Services division has been hobbled ever since an accounting scandal in Italy wiped billions off its parent company's market valuation. The IT services part of France's Orange is not quite performing the can-can, but it has a joie de vivre that its German and UK equivalents have long missed. (See DT's T-Systems Agrees Plan to Cut 5,600 Jobs ⎼ Report and BT: It's Good to Talk About Profits, but Not Customers.)

Nevertheless, Orange Business Services (OBS) is under much the same pressure as T-Systems International GmbH and BT Group plc (NYSE: BT; London: BTA). In the first half of this year, Orange's "enterprise" revenues held steady, at about 3.5 billion ($4.1 billion), but earnings (before interest, tax, depreciation and amortization) were down 5%, year-on-year, to just 579 million ($676 million). With sales of old-fashioned telco services in unstoppable decline, OBS is having to settle for lower margins as it charges into the faster-growing parts of the IT business. 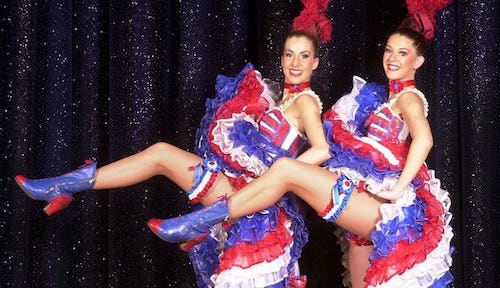 Orange Business Services is dancing ahead of its European telco rivals.

Reisinger, who took the CEO hotseat in May after the retirement of Thierry Bonhomme, reckons about one half of company revenues still come from "telco-centric" business. "In the market, that typically has an EBITDA margin of 25-30%, while for pure IT it is around 10%," he tells Light Reading. "Legacy telco will continue to go down, but our EBITDA margin remains one of the highest in the industry." (See Dr. Helmut Reisinger Named CEO of Orange Business Services.)

A comparison with T-Systems and the Global Services part of BT certainly flatters OBS. For the recent April-to-June quarter, T-Systems reported an EBITDA margin of 7% after adjusting the figure for one-offs, while BT managed about 8% over the same period. The equivalent margin for OBS was nudging 17% for the first six months of 2018. And unlike its German and UK rivals, OBS appeared to enjoy year-on-year sales growth for the April-to-June quarter, with Orange's "enterprise" revenues up 1.3%. T-Systems witnessed a 0.8% decline, and BT's sales tumbled 8% as it cut back on "low-margin" business. 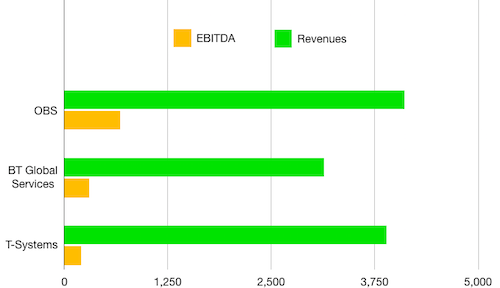 Source: Operators. Note: All currency conversions are at rates on September 18, 2018.

So what has OBS got right that its European competitors are doing wrong? Beyond noting that BT and Deutsche Telekom AG (NYSE: DT) currently face some "big questions," Reisinger is reluctant to comment specifically on the fortunes of other companies. What he will say is that OBS has been careful to avoid signing any "crazy deals," instead positioning itself as a premium player that can offer a high-quality service "from Alaska down to Argentina."

Network and business reach certainly helps. OBS today boasts a network capability in more than 200 countries and says only about one half of its 22,500 employees are based in France. At the same time, its forays outside the traditional telco business have generally met with early successes. Reisinger reels off a list of IT business areas where OBS is currently seeing a double-digit percentage rate of sales growth: Cloud, cyber security, analytics and (albeit from a small base) the much-hyped "Internet of Things." As reported in the last set of results, revenues from cloud services rose 18% for the first six months, while security sales were up 14%. The overall IT and systems integration business, which includes the cloud and security portfolios, seems to have gained momentum: Revenue growth soared to 9.7% for the second quarter, from just 0.4% for the first.

Takeover activity may have buoyed these figures, although it is unclear to what extent. In June, OBS acquired (for an undisclosed fee) a majority stake in Business & Decision, a big data specialist that brought skills it had previously lacked. "Apart from collecting and transporting data, we need to analyze it, and in this area we were quite weak until that acquisition," says Reisinger. Before the takeover, OBS had about 200 data experts, he reckons, and had made investments in a data management platform called Datavenue. Business & Decision gives it another 2,400 such experts across 11 countries and means it can derive greater insight from the data that OBS gathers. (See Orange to Buy Systems Integrator in $69.7M Deal.)

Even more recently, it bought a Norwegian data and cloud business called Basefarm, which made roughly 100 million ($117 million) in revenues last year and had about 550 employees, including 80 who are data scientists. "They have a great orchestration platform for managing multi-cloud services," says Reisinger. The takeover, as with Business & Decision, also brings new data skills into the OBS portfolio. Unbelievable Machine, a Basefarm subsidiary in Berlin, manages "data lakes" for major German companies, for instance, and has the capability to do that globally, according to Reisinger. (See Eurobites: OBS Buys Basefarm to Reap Multicloud Benefits.)

Next page: The Internet of enterprises