Is IBM Overpaying for Red Hat?

Red Hat CEO Jim Whitehurst (pictured below) clicked together the heels of his red shoes, whispered "there's no place like IBM" and was sucked into the vortex of Big Blue. (See IBM Buying Red Hat for $34B, Turning Cloud Upside Down.)

Or something like that. Clearly, there is no place like IBM Corp. (NYSE: IBM) when the ailing IT giant is paying $34 billion for your business. Any way you cut it, that is a monstrous sum to spend on a cloud company that trades in open source software. It is 8.7 times what Red Hat Inc. (NYSE: RHT) expects to make in sales in 2020, and a staggering 34 times its forecast for earnings (before interest, tax, depreciation and amortization) that year. It is about $2.7 million for each of Red Hat's 12,600 employees. 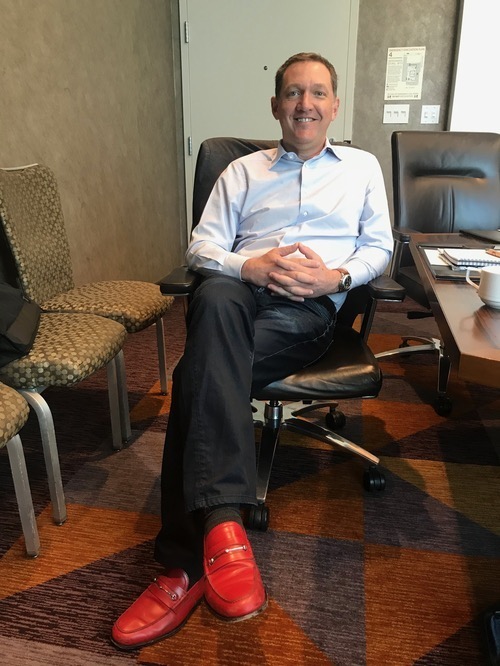 The fee also comes at a 63% premium to Red Hat's share price in New York on Friday. To compare it with other technology and telecom deals, it is $7.5 billion more than the value of T-Mobile's all-stock bid for Sprint, a service provider with more than 50 million mobile customers in the US market. At today's exchange rate, it is nearly twice what Nokia paid for Alcatel-Lucent, one of the world's largest makers of network equipment, back in 2016.

To many observers, this takeover will seem like a desperate bid for growth after years of stagnation. Red Hat's revenues grew a fifth in its last fiscal year (ending February), to nearly $2.6 billion, and it has nearly doubled in size since 2014. The bulk of that has come from "subscriptions" to Red Hat's portfolio of managed cloud-computing services based on open source code. Contrast that with IBM, which saw revenues dip 1% in 2017, to about $79.1 billion, and has struggled to keep up with the leaders in the market for cloud computing. (See IBM Is Losing the Cloud Race.)

IBM CEO Ginni Rometty obviously feels there is a lot to gain from offering Red Hat services to her vast audience of enterprise customers. Given Red Hat's evident appeal, this could accelerate the rate of sales growth the company has enjoyed in recent years. Red Hat's expertise and Big Blue's channels to market could be the perfect combination.

Relatively speaking, though, Red Hat will be a mere speck bobbing around in the Big Blue ocean. Its annual revenues equal just 3% of IBM's, and its net profit was less than 5% of its new parent's in the last fiscal year. Nor have profits grown at the same rate as sales. Last year they were up just 2% (although operating income rose at the far more impressive rate of 42%).

Moreover, not everyone seems convinced that Red Hat can sustain its current performance. It appears to have missed analyst expectations in its most recent quarter, and its forecast for the current three-month period also came as a disappointment. Its share price has fallen 34% since mid-June, when it peaked at $176.27 in New York. There is no cost overlap whatsoever, according to Rometty, which means the Red Hat move is entirely about delivering sales growth and an additional skills set for IBM.

The immediate impact on IBM's balance sheet could be nasty. Big Blue will fund this takeover entirely through cash and debt (and no stock), it said in its statement on the deal. At the end of the third quarter, it had about $14.7 billion of cash on its books, which implies it will have to raise at least $20 billion in debt to buy Red Hat at the agreed price. That is a substantial amount for a company whose balance sheet already showed $46.9 billion in debt at the end of September.

If IBM can pull a rabbit out of the Red Hat, and speed up the rate of sales growth at the business, then $34 billion might not seem like such an exorbitant fee. But with Red Hat facing uncertain prospects in a fast-changing market for software-based services, that will not be an easy trick to perform.

IBM has spent $110B since 2000 or $48B in the last 5 years buying buying back its own shares. Additionally, RHT hit a high of $175/shr before its retrenchment this year.

While IBM market cap was only $118B when the deal was announced, it came down quite a bit in spite of its forward p/e is single digit! Incidentally, Red Hat has a $1B net cash on its book and it too is a few tech firms having free cash flow, a heck better than, say, Netflix!

Is IBM overpaying? Considering it has also come down a lot since its earning report but negotiation didn't start yesterday, even if the deal might have been hastened due to market conditions.

Mind you, IBM is in a deep discount in terms of capitalization. It should be $200B market cap if you just adjust it to mid-teen, an average S&P stock.

Ultimately, IBM is considered a value trap - financial geek lingo - but if RHT could just reset the combined co's profile, say an old tech valuation a la Cicso, it is well worth it.

Besides, while Wilhurst is no billion dollar man, his presence should shake up IBM.

Remember Lou Gerstner paid $3B for Lotus Notes? IBM was in similar predicaments and everyone said CEO Gerstner was desperate. While it took Rometty a while to figure out Palmisano's strategy of dividend plus share repurchase not working. Better later than never. This RHT purchase is the finally piece of transformation - stopping the share repurchase in 2020 and 2021 - for the next IBM iteration.

So I'd think it is worth it*