Google Doubles Capex to $25.46B, Mostly on Data Centers & Offices

Google grew headcount to 98,771 at the end of the year, up from 80,110, with most of the growth coming in engineers and product mangers, and most of that in cloud. 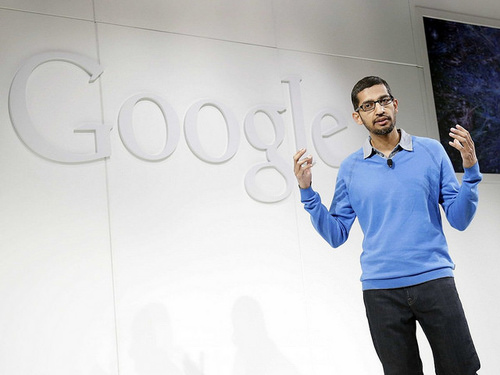 Sundar Pichai in 2014. Photo by Sam Churchill (CC BY 2.0)
Light Reading is bringing together all of the key players in the automation revolution in a NEW location! Don't miss the Telco Automation Everywhere event on April 2 in New York City. Join us as we tackle the business and technology challenges behind building autonomous networks. This event is free for communications service providers -- register today!

Alphabet expects growth in both capital expenditures and headcount to slow in 2019, CFO Ruth Porat said Monday on the company earnings call.

"The rate of year-on-year capex growth will slow meaningfully," she said, with greater focus on server capex. Growth in headcount will "moderate significantly" as well.

Revenue-wise, Alphabet is still an advertising company, despite its investment in cloud and other business. Google advertising revenues were $32.63 billion in the fourth quarter, 83% of the total for Alphabet.

In late 2015, Urs Hölzle, Google vice president for technical infrastructure, said Google wants its cloud business to be bigger than its ad business by 2020. It's got a long way to go and a short time to get there. (See Google Makes VMware Co-Founder Cloud Boss.)

The category Google calls "Other Revenues," which includes cloud, the Google Play store, and consumer hardware, saw $6.48 billion revenue in the fourth quarter, up from $4.96 billion year-over-year. "Other Bets" revenues, primarily derived from Fiber and Verily life sciences, was $154 million for the quarter, up from $131 million a year ago, with a loss of $1.32 billion, up from a loss of $748 million a year earlier.

Shout out to Google Cloud
Google CEO Sundar Pichai singled out Google Cloud for praise on the earnings call, along with outgoing CEO Diane Greene. But he didn't provide specific benchmarks.

Google Cloud is a "fast-growing multi-billion dollar business that supports major Global 5000 companies in every important vertical," Pichai said. "That wasn't the case three years ago," when Greene launched the business unit, Pichai said. "What Diane and her team accomplished is phenomenal."

Google more than doubled the number of Cloud Platform deals over $1 million, as well as the number of multiyear contracts signed, Pichai said. It's also seeing an "uptick" in $100 million contracts, Porat said.

But Alphabet did not provide specifics on the numbers of those big contracts, or total Google Cloud revenue compared with previous years.

Google Cloud is focused where it seeing the most momentum: 15 countries, six main verticals and five major product areas, Pichai said. Frustratingly, he didn't say what those were; we have a query in to Alphabet, but the company hadn't responded at press time. He did say data management, analytics, cloud-native application platforms and multi-cloud are among those strengths.