Comment (1)
No big bang
Circumstances have forced Deutsche Telekom to start investing in smaller, front-end data centers for specific national markets. Two are planned for each and every country where there is a need for "in-country production," says Sven Hischke, the managing director of the pan-net project. In some cases, those data centers will ensure that latency, or the delay that occurs when sending signals over data networks, does not become an obstacle to the rollout of services. "An example is with VoLTE [voice over LTE] set-up times, with the sheer number of messages exchanged between terminals," says Clauberg.

Low latency will be a requirement for some of the 5G services that take shape in future, too. But existing regulatory demands also explain why Deutsche Telekom is spending money on these front-end facilities as well as on its bigger, more centralized ones. "As a telco we need to fulfill more requirements than over-the-top players and sometimes that means we have to put usage in the country," says Hischke. 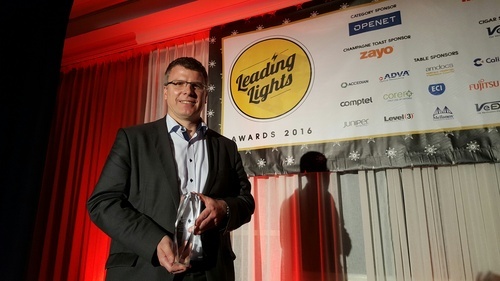 While these physical infrastructure investments are going ahead, the plan to switch off the service platforms catering to individual country markets still appears to be at a very early stage. Historically, Deutsche Telekom has maintained about 50 service platforms for each of the 13 central and eastern European countries the pan-net will eventually cover, or 650 in total. The move from per-country to pan-European platforms will therefore reduce the total number of platforms to about 50. Deutsche Telekom has so far switched off some SMS platforms and is about to retire some email systems, but Hischke warns against any expectation of a "big bang" shift.

Partly, it seems, that is because suppliers have yet to satisfy the operator's demands. "Not all of the platforms are available in the way we want to have them and so in the short term we don't have everything that we need," says Hischke. Even so, Deutsche Telekom is planning to introduce some new cloud-based services later this year or in early 2018 that will have been developed on pan-net platforms, although it will not disclose further details at this stage.

When it comes to the virtualization of pan-net functions, as well, Deutsche Telekom has started slow. "We began with something people would not generally consider a network function, and that was the email service," says Clauberg. "We haven't made a claim about hundreds of network functions by a certain time."

This marks something of a contrast with the approach taken by US telecom giant AT&T Inc. (NYSE: T), which has publicly revealed that it plans to virtualize 75% of network functions by 2020. All Clauberg will say is that Deutsche Telekom is preparing to take virtualized CPE (customer premises equipment) into a production environment. "We wouldn't disclose concrete roadmaps for countries at this stage," he says. By ensuring that Deutsche Telekom cannot be held to account for missing targets, the secrecy takes some of the pressure off the German operator, even if it might expose the company to accusations it is not being sufficiently aggressive. (See AT&T Touts Its First Virtualized Functions .)

The wariness, though, is not surprising given the cultural implications of "cloudification," as Clauberg describes it. "The move to software-based and cloud-based production is a massive change for operators," he says. "We are moving from waterfall processes to a more agile way of working and it's important to make sure we can operate with the same or better quality than what we have today."

By "waterfall," Clauberg means the highly structured, design-and-release approach to software development that still characterizes most telcos. The contrast is the DevOps model typically associated with web companies like Facebook and Google (Nasdaq: GOOG), whereby new products are developed and made available in a less regimented, more ad hoc manner. It is not just Deutsche Telekom that aspires to operate in this way, but the transition has ramifications for all parts of an operator's organization, from product design right through to sales and marketing.

Next page: The pan-net checklist