Qualcomm's new highest-end chip is a bet on snappy pictures and graphics. And its AI antenna tuning tech is designed to fix the "you're holding it wrong" problem.

The chip is a jump to a 4 nm process, from the 5 nm process of the company's previous star pupil, the Snapdragon 888.

Xiaomi, Sony, and Honor are among a dozen smartphone makers who have signed up to buy the new Snapdragon 8 chip, says the San Diego chipmaker. 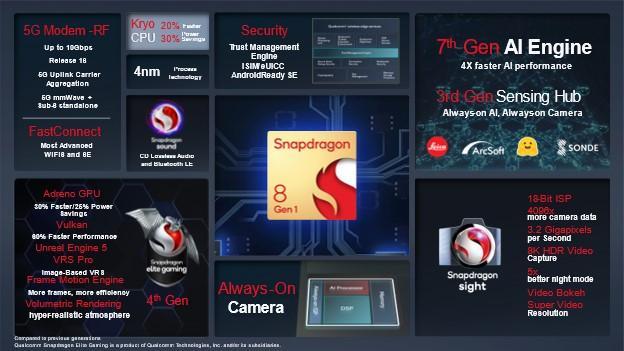 Triple digit names, once a Snapdragon hallmark, are a thing of the past now. Instead it's now all about generations: so this is the Snapdragon 8 line's Gen 1. Phones based on it will appear on the market quickly, in the next four weeks, including the Xiaomi 12 and a new Motorola Edge (though that may be for sale only in China). And early into 2022, Oppo's new flagship too, probably to be called the Find X4.

A chip for framing people

There are now over two billion users of Snapdragon-powered devices in the world. And devices built around it span from high-end Androids to laptops and Internet of Things devices. Qualcomm says its new chip is the first to hit 10-gigabit download speeds with its Snapdragon X65 modem, a decent improvement on the 7.5 gbps downlink speed limit of the modem on the 888.

It's also the first to use Arm's new Armv9 architecture.

In a launch event which also saw him play the ukelele (it's the tech sector, remember, these things happen), CEO Cristiano Amon cited improvements of 20% better performance and 30% more power efficiency over the 888.

For Amon's company, these new Android and IoT clients are key to putting meat on his assertion that Qualcomm isn't defined "by a single market and a single end-customer", as he told investors a few weeks ago.

He means Apple, if you wondered.

And while Qualcomm now supplies wireless chips for Apple's devices, it expects to provide just 20% of the modem semiconductors for the 2023 iPhone. Apple will by the end of 2024 be a "low single-digit" percent of a chip business that it expects to grow by 12% by then. Fighting talk, you see.

Apple bought the modem business off Intel two years ago and is working on in-house wireless 5G tech. But thankfully, as Amon senses, other, less fruity ecosystems are available. And a third of its chip sales are now outside the smartphone market entirely: PCs, cars, and VR headsets. Low-power IoT chips, now making up $5.06 billion of its revenue, will be up to $9 billion in 2024, Amon boldly predicts.

While self-driving cars, already the source of a Qualcomm partnership with BMW, will need silicon. Maybe $8 billion of it by 2031, not bad considering in 2021 Qualcomm's automotive sales have been under $1 billion. Meanwhile, back to cameras, with the Snapdragon 8, "your phone's front camera is always securely looking for your face, even if you don't touch it or raise to wake it," says Qualcommm's vice president of product Judd Heape.

An always-on camera, which you carry with you everywhere, always looking for you. Exciting. Or, just maybe, creepy.