When BT boss Gavin Patterson left his Surrey home this morning, he probably wasn't skipping merrily along the sidewalk, as his doppelgänger (see below) once did across a North American prairie. Patterson was on his way to BT's annual general meeting with shareholders, where he could expect a right old tongue-lashing. 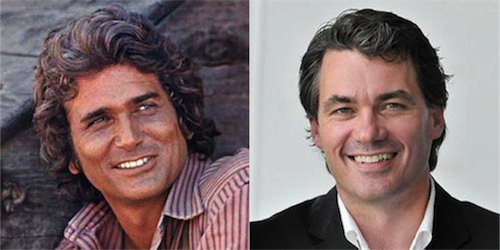 On the left, under-fire BT CEO Gavin Patterson; on the right, Michael Landon, star of 1970s TV show Little House on the Prairie. Oh, hang on...

Wait, what? That's right. According to a recently published Financial Times story (subscription required) that had me chortling over my afternoon latte, shareholders have raised a number of issues at today's meeting, including "the state of the company's phone boxes" and "problems removing telegraph poles from outside their homes."

In case anyone is in the dark about this (and you have a right to be), BT Group plc (NYSE: BT; London: BTA)'s phone boxes are a hangover from its days as a state-owned business, when mobile phones were unheard of and authorities wanted to ensure people could make calls on the move, not least in the event of an emergency.

In smartphone-obsessed 2017, they are used mainly by drunks as a substitute for public toilets (which, unlike phone boxes, have been almost entirely phased out) and as noticeboards for, ahem, "ladies of the night" who want to advertise their wares. For BT, they aren't much of a business opportunity, which explains why they aren't kept as spick and span as Patterson's office.

BT's shareholders, of course, range from huge institutional investors and Deutsche Telekom AG (NYSE: DT) to Average Joes who don't know much about technology. One suspects the phone box question came from the latter rather than the German telecom incumbent. Another shareholder, named in the FT story as PJ Lewis, took issue with the "feral" nature of the Openreach networks business, saying it was "only beholden to itself." BT's rivals would no doubt agree. That is why BT has done so well in the UK telecom market, they might add.

Patterson didn't get away scot-free. One shareholder is reported to have asked soon-to-leave chairman Sir Mike Rake why he hadn't leaned on Patterson to quit after such a bad year. But 98% of shareholders are said to have voted in favor of his reappointment. BT's share price, meanwhile, was up about 0.9% at the time of writing, at 290.10 pence, even though it remains 22% lower than at the start of the year.

Still, Patterson probably has a bit more of a spring in his step this afternoon. "Shareholders love me," he almost said, tossing back his luxuriant hair, as he fought off the 2% angered by his poor maintenance of phone boxes.

And for readers worried about the future of the pay phone, fear not. Only last month, BT said it would start investing in gigabit-speed digital street units as a replacement for its older pay phones. Disappointingly for drunks, they won't come in boxes.