BARCELONA -- MWC 2018 -- Spain is famous for its bullfights, but they don't usually happen at the Mobile World Congress.

Vodafone has not said it is in talks to acquire Unitymedia, Liberty's cable network in Germany, and merge it with its own network. But the word on the street is that confirmed talks between the UK-based operator and Liberty are mainly about these particular assets. (See Vodafone in Talks to Acquire Liberty Global Assets.) 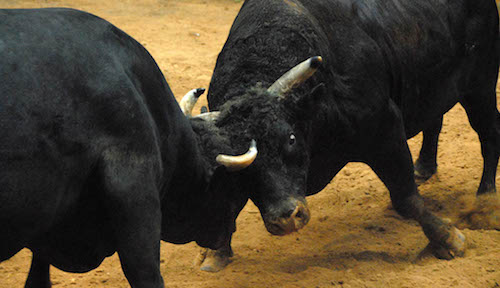 A bullfight has broken out at this year's Mobile World Congress.

The combination would produce a stronger rival to Deutsche Telekom, which has continued to lose market share to the country's cable operators despite its investments in higher-speed (albeit not fiber-to-the-premises) fixed-line networks.

During an earnings call with analysts last week, Höttges made his feelings about the prospective tie-up very clear, describing it as "unacceptable" and urging regulators to block the move.

In the red corner, Colao had the opportunity to hit back at this week's Mobile World Congress in Barcelona. "I have to be careful not to become personal," said Colao during a press conference with reporters. "I was surprised by his comments. He is a giant talking about shutting down competition. If I were him I would not do that."

Colao went on to say that he thinks Höttges is feeling jittery because of Vodafone's sterling performance in the German market in recent months. "I look at our results versus theirs and maybe he is a bit nervous," he said.

So what's Höttges's beef? Back in the magenta corner, the rangy executive was given the opportunity to explain his objections during a Deutsche Telekom press conference Monday afternoon, and he wasn't for backing down.

"History makes this deal unacceptable," he said, using one of the words that seemed to upset Colao so much the first time around. "We [previously] sold cable infrastructure and had to put it in three pieces because antitrust authorities didn't want cable dominance. If Liberty and Vodafone come together they will create a monopoly in the cable market."

He didn't stop there. "The dominance in TV combined with telecom is tricky for democracy," he said. "This deal is unacceptable from a competitive perspective."

Put in those terms, Höttges's arguments are pretty hard to fathom. Deutsche Telekom remains the only nationwide communications operator in Germany with fixed and mobile networks as well as a TV offering. Höttges appears to be complaining about the possibility that another German company could emerge with a nationwide or near-nationwide presence -- something regulatory authorities and consumers would surely welcome in many countries.

Perhaps his concern is that Vodafone will escape the same kind of regulatory strictures that bind Deutsche Telekom. In other parts of Europe, certainly, there is a preponderance of asymmetrical regulation, under which former state-owned monopolies are given less freedom than other operators.

In Spain, for example, Orange has been able to roll out fiber networks without being forced to open its infrastructure to broadband retail rivals -- unlike incumbent operator Telefónica.

"You have a nationwide player saying a competitor should not be able to buy a regional player because this creates a kind of threat," said Colao. "If you follow that logic then Deutsche Telekom should be split in two -- east and west -- so it is an illogical statement. I understand why it irritates him but it is maybe not for the right reasons."

Over to you, referee.