Vodafone Gets Set for Gigafast Assault on BT

Residents of the UK city of Milton Keynes are said to have put up with some of the worst broadband connections in the country, but in the next few weeks about 4,000 homes will be able to subscribe to a new "gigafast" service from Vodafone.

Better known in the UK market as a mobile operator, Vodafone UK has been developing the high-speed broadband service in partnership with CityFibre, which is building a glass-fiber network that reaches all the way to customer premises. The gigafast service is both a sign of Vodafone's frustration with the wholesale products it buys from BT Group plc (NYSE: BT; London: BTA), and an attempt to wrest broadband customers from the former state-owned monopoly. (See Vodafone, CityFibre Take Their Gig to Concrete Cowland and Vodafone UK Boss Slams Openreach 'Stranglehold'.) 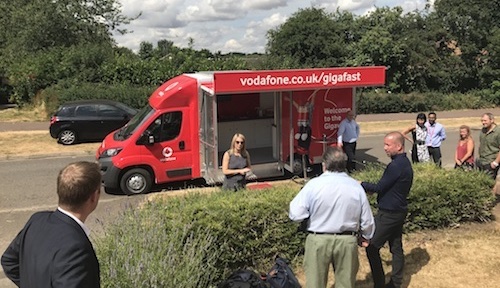 Vodafone and CityFibre take their gigafast show onto the roads of Milton Keynes.

"For us it marks a big milestone," said Neil Blagden, Vodafone UK's chief operating officer, during a demonstration of the gigafast technology at a residential property in Milton Keynes. "It is a bit of a challenge to BT because they have been talking about it for ten years and have got nowhere."

A commercial launch for the 4,000 homes covered by the CityFibre network is likely to happen between mid-August and early September, and will follow trials with about 50 customers this summer. Those who spoke to reporters were effusive when comparing gigafast with their older BT-based services. One local resident said uploading video files for work purposes had previously been an overnight task. Now it takes minutes, she said.

Tests have recorded peak connection speeds of about 900 Mbit/s when uploading and downloading files on a standard PC, according to Blagden. During one test Light Reading observed at a customer property, Vodafone registered connection speeds of about 500 Mbit/s, on both the uplink and downlink, using a tablet. The bottleneck that prevents customers from enjoying even faster services is no longer the broadband connection but the end-user device, according to Guilhem Poussot, who heads up Vodafone's gigafast program. Nevertheless, the service represents a dramatic improvement on average broadband speeds of 26.6 Mbit/s in Milton Keynes, according to press reports, and the national average of 44 Mbit/s. 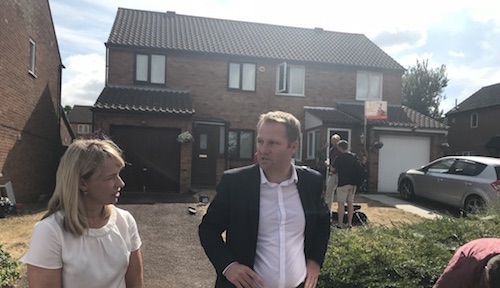 Availability will clearly be limited when gigafast turns commercial, with 4,000 properties representing less than 4% of the 111,813 homes in the entire Milton Keynes borough, according to housing statistics from local authorities. But Vodafone and CityFibre plan to cover about 1 million premises across 12 cities by the end of 2021, and are targeting 5 million UK premises by 2025. That would put all-fiber networks within reach of nearly a fifth of UK homes. CityFibre reckons just 3% of households can access an all-fiber service today.

The other gigafast cities announced so far include Aberdeen, Coventry, Edinburgh, Huddersfield, Peterborough and Stirling. All are places in which CityFibre already has some network infrastructure it is using to support business customers. "We have spine networks in 40 cities around the UK covering around 4 million homes," said Rob Hamlin, CityFibre's commercial director. "We are extending those down streets and that gives us a speed and cost advantage."