Vittorio Colao, the smooth-talking Italian who ran Vodafone until October last year, hoped his final grand act in May 2018 would be dazzling but not difficult. The 18.4 billion (US$20.9 billion, at today's exchange rate) deal for cable operations in Germany and eastern Europe, owned by Liberty Global, would create a regional powerhouse with the muscle to clobber rival Deutsche Telekom in its own backyard. Regulators could hardly object, he smiled knowingly, because there was no footprint overlap between Vodafone and the networks it was buying.

But those regulators did object after Timotheus Höttges, Deutsche Telekom's CEO, kicked up a stink. "History makes this deal unacceptable," he had told reporters during a press conference at last year's Mobile World Congress, when the deal was just a rumor. "If Liberty and Vodafone come together, they will create a monopoly in the cable market."

With Colao unable to work his charm on regulatory officials, the rescue job fell to Nick Read, his British successor. In May, a year after the takeover was originally announced, Read promised to give Telefónica's German subsidiary access to his post-merger cable assets. The concession would address concern about the impact of the deal on competition, Vodafone hoped.

The David Moyes of Telecom? 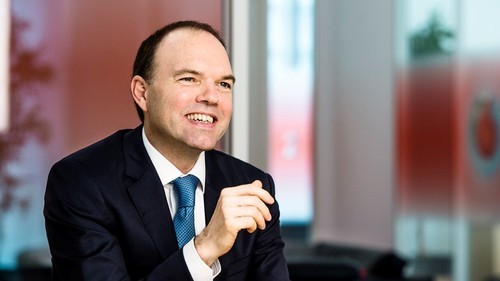 Vodafone's Nick Read has witnessed a 20% fall in the operator's share price since he took charge.

It might have done the trick. European officials are now poised to give their blessing to the takeover, according to a report this week by Reuters. More than a year after Colao shrugged off suggestions that regulators might be an obstacle to his plans, Vodafone may have the finishing line in sight.

From the perspective of Vodafone and Liberty Global, the rationale has not changed. "The move still makes strategic sense for both companies," says Paolo Pescatore, a telco, media and tech analyst with PP Foresight. In Germany, in particular, it will allow Vodafone to market both fixed and mobile services to a much bigger audience, and dissuade customers from defecting to rivals (mainly Deutsche Telekom) with the full service wrap. The acquisition of fixed-line assets could also support Vodafone's 5G strategy in Germany, providing "backhaul" links for mobile data traffic.

A merger also promises substantial cost savings. Vodafone last year said it was targeting annual savings of 535 million ($609 million) by the fifth year following the deal's completion (when that was expected in mid-2019). It also guided for revenue "synergies" of about 1.5 billion ($1.7 billion) from cross-selling opportunities.

But the impact on competition has been a sticking point for some analysts. "It still reduces the number of national players in both the fixed-line and pay-TV markets," says Pescatore about the original format of the deal. "Therefore, concessions need to be made." The question is whether Read's Telefónica offer will silence the critics. Various smaller rivals believe it does not go far enough, according to Reuters. If European regulators do approve the deal, a legal challenge could swiftly follow.

Given the vehemence of its earlier objections, Deutsche Telekom might also continue to oppose a deal. Colao and Höttges had locked horns over German consolidation at Mobile World Congress in 2018, with the former Vodafone boss suggesting his rival was simply worried about a new competitive threat. This year, with Read in charge, the focus of press attention at the giant Barcelona-based event had shifted to Huawei, the Chinese equipment vendor popular with both operators but seen as a conduit for Chinese spies by officials from the US and some other Western countries.

However the merger plays out, Read could do with a big deal that makes "strategic sense" and buoys investors. Since he took charge of the company on October 1, Vodafone's share price has fallen more than a fifth on the London Stock Exchange. Underperforming operations in Spain and Italy, heavy spending on new 5G licenses and little prospect of a revenue boost from the introduction of 5G services this year have all conspired to weaken market sentiment.

There is a risk the transfer from Colao to Read starts to resemble the infamous 2013 handover at Manchester United Football Club, when legendary manager Alex Ferguson, sensing trouble ahead, gave the reins to former Everton boss David Moyes. That didn't end well: Read will want to avoid becoming the Moyes of telecom.