The group of "power users" that consume at least one terabyte of Internet data per month doubled in Q1 2019 to include about 4.2% of all broadband subscribers, according to a new industry report from OpenVault, a company that provides data and analytics to various broadband operators.

Those results follow closely with Cisco's latest VNI Global IP Traffic Forecast, which also found that the number of Internet homes exceeding 1TB in monthly data usage doubled from 2016 to 2017.

While the overall percentage of consumers that gobble up at least 1TB of data is still relatively small, the rate of that growth could force some cable operators and other ISPs to tweak their monthly data usage policies. 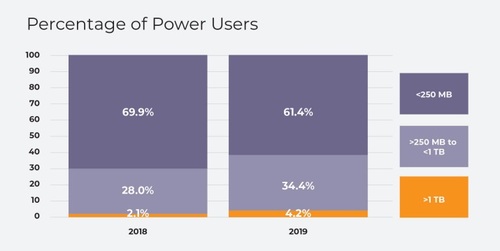 Providers such as Comcast currently set a monthly 1TB data limit on residential broadband subs before it charges $10 more for each additional bucket of 50 gigabytes, though total overage charges in a given month will not exceed $200. In most areas, Comcast also offers an unlimited data option that costs an additional $50 per month.

Cable One's policy is more nuanced based on its speed tiers, setting a 300GB monthly limit on its flagship 100 Mbit/s tier, and 900GB for its 300 Mbit/s service, and up to 1.5TB for its 1-Gig offering. In addition to charging $10 for an extra batch of 100GB of data if customers exceed their monthly plan, Cable One also offers an unlimited plan for an extra $40 per month. Earlier this month, Cable One said that about 10% of its new broadband customers opt for the unlimited plan.

But the general idea with all of these plans has been to keep the monthly data ceilings high enough so that the vast majority of residential broadband customers don't regularly exceed those limits. That's to keep things fair among the masses, but also to keep the outcries in check.

But OpenVault's data shows that data demands are still climbing at rates that could cause some adjustments to be made in ISP data policies in the months to come to ensure that there's still a wide disparity between customers who stay below the cap and those that blast through it.

On that more severe end of the usage spectrum, the number of subs exceeding 2 TB per month also doubled in Q1 -- but only to 0.38%, versus 0.16% in the year-ago period. So, that's still a drop in the bucket.

However, OpenVault also found that Internet-only subs -- a group that included cord-cutters that turn to OTT-delivered pay-TV and subscription VoD services for their video needs -- chewed up 397.7GB per month on average, some 120GB more than the average broadband subscriber, and almost double the 209.5GB consumed by homes that bundle Internet with a traditional pay-TV service.

"Cord cutting behavior is impacting bundling and bandwidth consumption," OpenVault said in the report, which is based on anonymized data generated by its ISP partners around the world. "Service providers rode a significant wave over the past ten years with triple- and double-play bundling of services. There is evidence to suggest that wave has crested, as more consumers opt for Internet-only packages."

Those findings match up pretty well with other recent data reported by ISPs. Charter and Comcast said monthly data usage hovers at about 200GB and, for Charter, surges to 400GB among those that don't take a pay-TV package from the operator. Meanwhile, Starry, who caters to cord-cutters with its 5G-based fixed-wireless broadband service, is seeing average consumption of 350GB per month.

OpenVault also found that the overall average monthly usage in Q1 reached a new high of 273.5GB, a 27% year-on-year increase.

However, there's a huge gap in consumption among subscribers getting service from a provider with a flat-rate billing policy compared to those that employ usage-based policies. In flat-rate (unlimited) systems, the percentage of power users (1TB-plus per month) is 32% greater than those in usage-based billing systems, OpenVault found. That gap is even greater (76%) among subs who consume more than 2TB of data per month.