DENVER -- Big 5G Event -- Due in part to a significant level of OTT video consumption, the average Starry subscriber gobbles down about 350 gigabytes per data per month, and a smaller group of users, in the top 1% to 2%, devour more than 1 terabyte per month.

That's according to Alex Moulle-Berteaux, COO of Starry, the Boston-based provider of fixed wireless Internet services that are being delivered over millimeter-wave spectrum in a growing number of US markets.

"It's clear that we are seeing cord-cutting consumption," Moulle-Berteaux said here today in a keynote conversation with Mike Dano, Light Reading's editorial director, 5G & mobile strategies. Moulle-Berteaux said most of Starry's customers don't have a traditional pay-TV service and are instead using various OTT services to fulfill their video needs.

Getting a Fix on Fixed Wireless Broadband 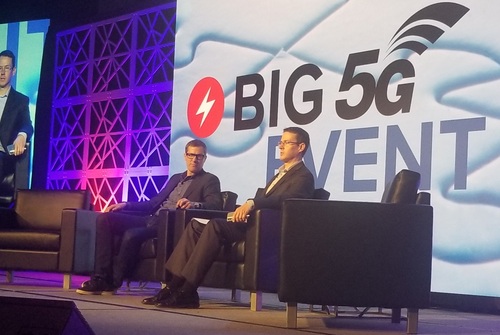 Data usage among Starry users is also outpacing some of the averages that two of the nation's largest cable operators have recently reported. Comcast said last month that it saw median broadband home data usage of 200 gigabytes, up 35% per year, in Q1 2019. Charter Communications' median usage is similar among residential broadband customers, but balloons to 400GB among customers who don't take the MSO's pay-TV packages.

Starry is live in five cities, including Denver, Los Angeles, New York, Washington, D.C. and Boston, with an uncapped, symmetrical 250Mbit/s offering that starts at $50 per month. Plans are underway to extend service to another 17 cities. Starry has initially focused on apartments and other multiple dwelling units but has intentions to offer service to individual homes and commercial customers, too. Moulle-Berteaux said about 65% of Starry subs work at home more than 25 hours per week.

Starry has not announced subscriber numbers, but Moulle-Berteaux said Starry typically could get 20% of the residents in a building to take its service within 60 to 90 days of launch. He said Starry's been able to resonate with apartment dwellers with a relatively low-cost, high-capacity and uncapped competitive option.

Though other companies, such as Verizon, are also using millimeter wave spectrum to fuel in-home, high-speed wireless broadband services, Starry is trying to stand out with a business and technology model that leans on a low-cost infrastructure that can also be deployed rapidly across a market.

By way of example, Moulle-Berteaux said Starry, using its hub-and-spoke approach, was able to deploy a network covering two-thirds of metro Boston at the cost of less than $5 million over 18 months. Each hub-like Starry Beam provides about 1.5 kilometers of coverage to reach the underlying Starry Point transceivers.

"It's a point-to-multipoint approach," Moulle-Berteaux explained.

Though Starry has initially focused on value concerning speeds and pricing on its core high-speed Internet offering, the company is also exploring ways to broaden its service focus. For example, Moulle-Berteaux said Starry is starting to think about how it can take a more "application-centric" approach with respect to premium-level offerings that support low-latency gaming or are optimized specifically for video calling or video streaming. He pointed to Google Stadia and the high-capacity and low-latency requirements that this new gaming service will have.

"A lot of these networks weren't built that way" to support such a service, Moulle-Berteaux said.

Starry, he added, is also looking at services and applications it might be able to stack on top of the underlying data offering, such as cloud storage and home automation.