Liccardo says in his letter: "We've made no progress toward a single proposal that will actually further the goal of equitable broadband deployment," and that "despite the good intentions of several participants, the industry heavy makeup of BDAC will simply relegate the body to being a vehicle for advancing the interests of the telecommunications industry over those of the public."

It's fair to say things got a little snappish at the FCC yesterday.

The Broadband Deployment Advisory Committee (BDAC) -- which is charged with laying out recommendations to the Federal Communications Commission (FCC) for driving broadband expansion in the US -- found itself facing a fundamental divide. Some members of the committee want rules that give communications service providers greater access to poles and other structures in the public right-of-way by guaranteeing local permit approvals and capping fees.

Others believe local officials have the right to determine rules of access based on the public interest. Specifically, they think that local governments have the right to negotiate with service providers to ensure that broadband buildouts reach all communities, thereby helping to close the digital divide.

The fault lines in the debate are clear. Industry folks want unfettered access, arguing that next-generation broadband services require it. Cities, and in some cases states, want service providers to recognize that there are other factors to consider, i.e. that it takes resources for local governments to oversee permitting, and that unregulated deployments without regard for the needs of an entire community are not in the interest of the citizens who collectively own the public assets in question. (See Broadband Fee Fight Gets Messy at the FCC.)

According to San Jose Mayor Sam Liccardo, who is part of the working group in the BDAC focused on creating a municipal code for broadband deployment, his group was recently moving toward consensus in its discussions after many long hours of debate. However, before the group was able to present its ideas to the broader committee at the FCC this week, AT&T Inc. (NYSE: T) filed a separate proposal that Liccardo says was essentially a "rewrite of what had been very much worked through."

And he added that, "It was dispiriting for many of us who had been working hard to see suddenly things really swept aside for the industry proposal." 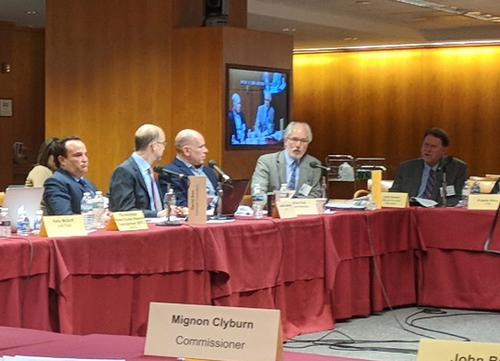 At center, AT&T's Chris Nurse speaks during the January BDAC meeting at the FCC

AT&T's argument is that if communities don't make it easier and cheaper for telecom companies to deploy their equipment, broadband deployments will stall out and consumers will suffer. The company says in an FCC filing that attachment rates should be capped at $50, and that higher rates would lead to "lost investment and/or higher services costs [that] would harm consumers and materially inhibit or limit a service provider's ability to provide wireless services at the quantity and quality customers now demand."

Chris Nurse, assistant vice president for external affairs at AT&T, also noted at this week's BDAC meeting that deployments of wireless small cells are an example of how the current pole attachment process isn't working because it's costly and time-consuming. He suggested that the cable industry's rollout of WiFi hotspots has been far more effective because there's no incremental cost or approval required for deploying each new wireless access point.

"No one understands what you guys are trying to do with negotiating with thousands of cities better than the cable industry. We've been doing it for 50 years," said Don.

He added that, "We can see when you guys decided to enter the public rights-of-way for the first time after 20 years of building out your networks on public property, and this densification process you're undergoing, why you would want to seek a more streamlined approach than the cable franchising model. But to suggest that we're getting some kind of a free ride or it's a highly efficient system? There's one piece, these WiFi hotspots, that you may want to point out, but this is part of a bigger negotiation which takes years with these communities."

Want a deep dive on the role of communications networks in smart cities? Join us at Light Reading's new breakfast event – Smart Cities, Dumb Pipes. Featuring an all-star line-up of experts, the event will be hosted at Smart Cities Connect 2018 in Kansas City on March 28. Admission is free for all conference attendees!

Here's why the whole debate is so important. Although the BDAC group is only charged with making recommendations to the FCC, those recommendations will inevitably be picked up by both lobbyists and lawmakers in the future. In fact, many involved in the BDAC process have pointed out that often times legislators use the exact language included in an expert group's recommendations to craft new laws.

In other words, whatever goes in the final BDAC report could very well end up in a future bill presented to Congress.

The bill hasn't been formally introduced in the Senate, but its proponents may be (among other reasons) waiting to see the recommendations of the BDAC first.

Pole attachments don't get nearly the hype of an issue like net neutrality. But the impact to broadband rollouts of what gets decided about the pole attachment process will be substantial over the next many years.

And if the fights among the BDAC members are any indication, the debate is only going to get more hostile from here.

I live and work in one of the leafy suburbs of Boston (one of those "W" towns), and do follow the local media.

Yes, IBEW Local 103. But really, Menino overplayed his hand on the cable franchise agreement in 2007-ish, and got "No FiOS for you". FiOS envy is a thing in the city. Boston CIO Jascha Franklin Hodge was floating the idea of a municipal network for a while. Ultimately, Bob Kraft brokered a meeting between Walsh and McAdam and that's what got the ball rolling. There was a Boston Globe article about how it came together, sometime in late spring 2016.

I don't recall anything in the contract about labor specifics. What I do understand is that Local 103 has a strong job protection clause in their contract, and construction is being done here by VZ employees that otherwise would have been contracted out.
Reply | Post Message | MESSAGES LIST | START A BOARD

To shed some further light on how private-public "business partnerships" work around these parts... The Boston political climate is tempered heavily by powerful unions. The current mayor of Boston, Marty Walsh, rose in his career as a union lawyer -- and easily won his seat after Tom Menino retired thanks in substantial part to union support. Union workers generally enjoy exceptionally strong support in Boston.

(To be clear, I don't know anything about the labor specifics of the Boston-Verizon partnership, by the way. Just straying off topic a bit so as to give you some local flavor.)
Reply | Post Message | MESSAGES LIST | START A BOARD

Your point that one size does not fit all is well taken. Each municipality has to evaluate the gives and the gets. They just need to approach it as a business partnership.
Reply | Post Message | MESSAGES LIST | START A BOARD

Joe Stanganelli 1/28/2018 | 10:26:25 PM
Re: Finding a balance > They should also consider that cities like Boston and Houston that partner with providers get all the latest goodies for their citizens

Funded in large part by said citizens. And the goodies aren't particularly goodies for all.

Not to pooh-pooh these efforts wholesale, certainly, but what's right for one municipality may not be right for another.
Reply | Post Message | MESSAGES LIST | START A BOARD

I think you are right on.  This can not be a Federal Issue.  They can issue any rule, law or edict that they want and there is no way to enforce it.  If a city wants to charge $1B for each pole access they can.  If they want to charge $0, they can.  There are LOTS of network construction issues that are not harmonized.  We don't have common tower location standards, common OSP cabinet standards, and a zillion other issues.

We invoke the 14th amendment and point out that is essentially wipes out state and local governments (hey why my vote in California be worth less of a percent of an electoral college vote than one in Wyoming and still have "equal protection).  There are no other building codes that are harmonized, why should the federal government be able to overrule here?  And by the way this extends to highways and other infrastructure.

Duh! 1/26/2018 | 3:02:46 PM
Re: Finding a balance It's complicated. The Communications Act does give the FCC limited pre-emption authority (don't remember all the details). Pai has a bunch of NPRMs queued up that do preempt local authority. Plus the existing antenna siting rules pre-empt the states, and the pole attachment rules hold unless the state reverse-preempts.

BDAC is attacking the problem from the other direction, creating model codes that states and localities can adapt to their own needs and adopt. That's "model" in the sense that ALEC writes "model" state laws.

Also: BDAC is not a formal proceeding, just a bunch of people the FCC recruited to talk about problems and write recommendations. If there were to be an FCC rulemaking on any of these topics, it would go through the regular notice and comment process.
Reply | Post Message | MESSAGES LIST | START A BOARD

mendyk 1/26/2018 | 2:36:31 PM
Re: Finding a balance Given that regulatory power in telecom has been clearly established to lie with state and local governments for decades, on what basis can the FCC ignore that established legal framework to mandate changes?
Reply | Post Message | MESSAGES LIST | START A BOARD

Duh! 1/26/2018 | 2:24:20 PM
Finding a balance I take issue with Pai's "all regulation is evil" philosophy. However, legal, permiting, joint engineering, make ready and small cell siting are probably the biggest barrier to broadband deployment and competitve broadband markets. Some municipalities do try to treat broadband providers as a cash cows, whipping boys, or tributaries. There is also a certain amount of official corruption at the local level.  Given that universal broadband service and real competition are important national goals,  the FCC is right to intervene.

At the same time, municipalities need to at least cover their costs. They do need network upgrades. They have a legitimate interest in ensuring that their least profitable citizens are served. They also are accountable to their constituents who complain about perceived eyesores.

And on the third hand... there are lots of local goverment officials in the country who'd give up a kidney for high-speed broadband in their communities. Officials like Mayor Liccardo should be grateful not to be among them. They should also consider that cities like Boston and Houston that partner with providers get all the latest goodies for their citizens, plus the pricing benefits of real competition.

It would be very informative to see the consensus draft that Mayor Liccardo claims was steamrolled in the sub-committee. It could be that it struck a balance that the current draft does not.