Following a series of financially disastrous quarters, Frontier is reportedly preparing to sell off the landline assets it acquired from Verizon in 2016.

The rumor surfaced in a Bloomberg story citing "people with knowledge of the matter." A Frontier Communications Corp. (NYSE: FTR) spokesperson told Light Reading only that the company does not comment on market rumors.

Frontier bought the Verizon Communications Inc. (NYSE: VZ) systems in California, Florida and Texas for $10.5 billion not quite two years ago, but the company has seen its fortunes steadily decline since then. Most recently in 2017, Frontier's third-quarter revenue dropped to $2.25 billion from $2.3 billion the previous quarter, and $2.52 billion in Q3 of 2016.

Equally, and arguably more worrying, the company lost 99,000 residential customers in the third quarter, and a whopping 405,000 in the first nine months of last year, leaving it with 4.95 million residential subscribers in total. Commercial customer numbers were also down, sinking from 516,000 at the end of the first three quarters of 2016 to 463,000 by the end of Q3 2017.

All of these numbers just go to show how desperate Frontier may be to improve its balance sheet. The company's stock price rebounded somewhat on news of a potential sell-off, although it then dipped again as the entire stock market tanked in what hopefully is a short-lived and mini crash. Since Frontier bought the Verizon systems, its stock price has cratered, falling from roughly $82 per share to less than $8 as of this afternoon. 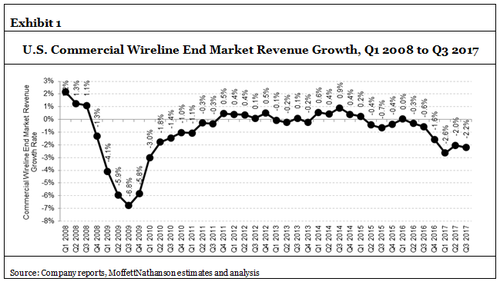 Frontier is not alone in its wireline woes. The US wireline market has been shedding revenue as a whole since about the same time Frontier bought the Verizon systems, as the chart above shows. Unfortunately for Frontier, the telco doesn't have much to balance out those losses, unlike rivals with wireless and content assets.

The company will post its next earnings report on February 27.

Naw maybe Fairpoint, they have done SO well with the lines they bought (HEAVY SARCASM).