CenturyLink has moved a step closer to acquiring Level 3 with news that the US Department of Justice has cleared the deal subject to conditions requiring CenturyLink to divest itself of certain metro fiber and dark fiber assets.

The initial deal was announced a year ago this month and is now expected to close within the next three to four weeks. CenturyLink Inc. (NYSE: CTL) is only awaiting further approval from the California Public Utilities Commission. The telco is buying Level 3 Communications Inc. (NYSE: LVLT) in a transaction valued at approximately $34 billion, including debt. (See CenturyLink Splashes $34B on Level 3 Buy.) 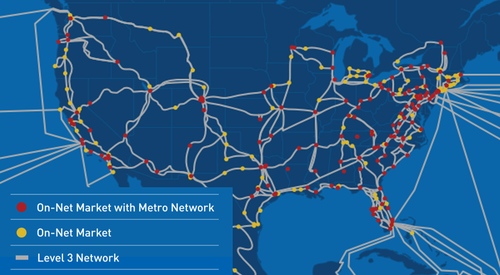 High-level look at the Level 3 network in North America, courtesy of Level 3

Among the conditions for deal approval, the DOJ has stipulated that the combined company of CenturyLink and Level 3 must sell off metro network assets currently owned by Level 3 in Albuquerque, N.M.; Boise, Idaho; and Tucson, Ariz. In addition, the merged entity will need to divest itself of 24 strands of dark fiber that connect 30 pairs of cities across the country.

That intercity fiber in particular should prove highly valuable on the open market. Carriers nationwide are attempting to bulk up on capacity to support more enterprise bandwidth demand and to backhaul future 5G network services. Potential buyers could include fiber infrastructure companies like Crown Castle International Corp. (NYSE: CCI) and Uniti Fiber , as well as the top two US telcos, AT&T Inc. (NYSE: T) and Verizon Communications Inc. (NYSE: VZ).

For CenturyLink, the acquisition of Level 3 is specifically designed to strengthen its enterprise business. Currently the company is the nation's third-largest telco serving the enterprise market, but it would jump to second behind only AT&T with the addition of Level 3.

Beyond the acquisition of Level 3, CenturyLink is also working diligently to transform its business through virtualization efforts and an attempt to change the cost structures around service delivery. The company has moved many of its operations to the cloud and is driving more programmability and automation into its network infrastructure. (See CenturyLink CTO Updates on Transformation 'Journey'.)

CenturyLink's stock price rose around $0.50 this morning to $19.78 on news of the DOJ approval before moderating slightly. Assuming the deal closes later this month, current CenturyLink CEO Glen F. Post III will take over as CEO of the new company, while Level 3 President and CEO Jeff Storey will become president and COO.