Philip Jansen is the first to admit BT is not "perfect." The UK telco, which he joined as CEO in February, has seen its share price tumble 63% since the end of 2015 amid a blizzard of competitive and regulatory challenges. Jansen is now hoping to restore some optimism with a renewed focus on customer service, including the latest push into "convergence" and an overhaul of its high-street presence. Branded "Halo," the new offer, and the efforts around it, will not guarantee its status as supreme being in the UK telecom market.

Unveiled during a press conference at BT's central London headquarters earlier today, Halo is touted as a "convergence" successor to the BT Plus offer that was launched in 2018. Details are thin, with BT promising more information in the coming weeks. But Halo will effectively package an unrestricted smartphone service with unlimited landline calls and superfast broadband. Customers will be able to upgrade to 5G starting on October 11. They can also call on a team of "Home Tech Experts" to hook up a growing collection of connected devices.

The Three Wise Men of BT 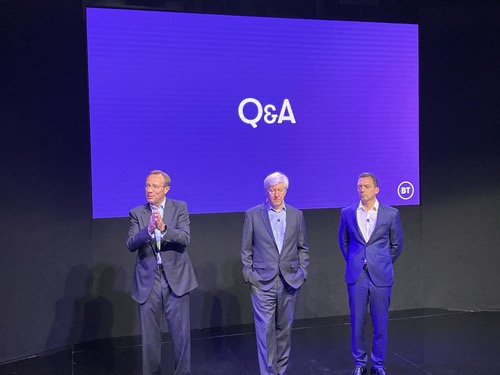 CEO Philip Jansen (left) answers questions next to Gerry McQuade (middle) and Marc Allera, the respective heads of BT's business and consumer divisions. But do they have the answers?

"Convergence," in this sense, essentially means the bundling of different communications services into one bill. For a consumer, the attractions lie in price -- assuming the bundle is cheaper than buying services separately -- and convenience. Telcos like BT are keen because customers are less likely to quit a bundle than a standalone service. And ticking all the different service boxes lowers the risk of customer poaching by rivals.

BT Plus continues to lure consumers. "We've connected 1 million customers and 3,000 are signing up every day," said Marc Allera, the CEO of BT's consumer business, during today's event. Customer satisfaction scores are higher than for any other group. Allera presents Halo as the next chapter in the convergence journey.

But one leading industry analyst has been underwhelmed by the response to BT Plus. "It's modest growth for a product that promised so much," said Paolo Pescatore, a tech, media and telco analyst with PP Foresight. The UK appetite for bundles also looks weak, he says. "It still hasn't moved as fast as in Europe. It's still a cross-sell," Pescatore tells Light Reading on the fringes of BT's event. Others in the service provider community also question levels of interest. "There is a portion of the market that is not looking for everything at once and that wants to pick and choose and not be tethered," said Ros Singleton, the CEO of UK Broadband, today owned by mobile operator Three UK, during a previous interview.

The discounting associated with bundles also threatens to put further downward pressure on pricing in what is already a fiercely competitive telecom environment across Europe. Compounding that problem, BT today said it would upgrade about 700,000 home and broadband customers still on slower broadband connections to a superfast service at no extra charge by June next year. That should help BT switch off old technologies and save costs, but it will mean less sales growth from the take-up of higher-speed services.

There is another side to convergence. BT has long talked about using fixed, mobile and WiFi technologies to provide a more seamless connectivity experience to its customers. "In the end, it won't be mobile or fixed but a virtual connection in people's minds with all devices connecting to the best network," said Jansen. If Plus was a "modest convergence product," then Halo is an example of where BT is heading, he said.

But unless BT is holding back some key information, the new service still seems very short of this technological promise. And the vision of a fully converged network, allowing connections to slip unnoticed from fixed to mobile systems, continues to throw up challenges. "None of this is doable today but we would like it to be in the future and that is what we are promoting," said Maria Cuevas of BT's mobile research team during a presentation at Informa's recent 5G Core Summit in Madrid. Among other things, she said, there is a need for more collaboration between industry groups such as the 3GPP and the Broadband Forum, which define the standards that underpin services.

Branding is another issue for the UK telecom giant. The convergence that has happened between BT and EE, the mobile operator it acquired in 2016, is sub-optimal. Customer service teams seem unaware of the connection between EE and BT. Plusnet, a low-cost BT brand, is a further complication. "There is still a lot of confusion on the high street. Is it BT? Is it EE? Is it Plusnet?" says Pescatore.

A co-branding commitment to the high street might help. Around 600 EE stores are to be "dual-branded," meaning the BT brand will be within a 20-minute drive of 95% of the UK population, according to Allera. In addition, customer service jobs outsourced to India are returning to the UK sooner than planned. BT had earlier promised to answer all customer calls in the UK and Ireland by January 2021. It now expects to hit this target by January 2020.

The strategy seems at odds with the store closures and growing reliance on "chatbots" that other European telcos are pursuing. Vodafone, for instance, this week announced plans to close 15% of its 7,700 stores in Europe as customers opt for online transactions. In the UK, where it has made investments in a chatbot that handles queries previously answered by assistants, it shed 1,700 employees in the two years leading to March, about 13% of its entire UK workforce.

Asked how BT would pay for some of the initiatives announced today, Jansen referred to the £350 million ($428 million) in additional investment it promised in May this year. "We are spending it wisely and in places where it will make a difference, but there is no change in guidance," he said. That guidance is not encouraging, though. BT expects revenues to fall 2% in the fiscal year to March 2020 and says adjusted earnings (before interest, tax, depreciation and amortization) will drop 1% to 3%. 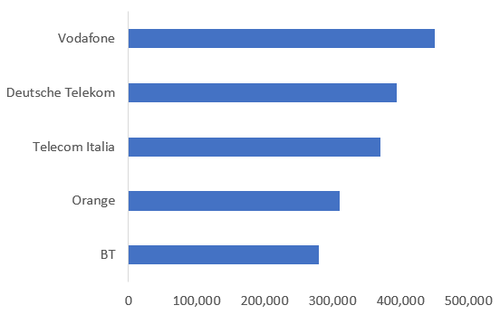 Plans to return jobs to the UK are unlikely to please shareholders, either. BT already looks obscenely bloated next to its European peers, generating about $280,000 in per-employee revenues last year, compared with $495,000 at Vodafone, $450,000 at Spain's Telefónica, $395,000 at Germany's Deutsche Telekom, $370,000 at Telecom Italia and $310,000 at France's Orange. Under previous management it announced plans to shed 13,000 back-office and managerial jobs and boost profitability. But its recruitment of staff for engineering and customer service roles buoyed headcount by nearly 1,000 employees in the last fiscal year, to 106,742 at the end of March. "We are redirecting jobs back into the UK and away from India," said Jansen.

Some jobs, he should have said. BT's latest CEO is now understood to be considering an even bigger number of layoffs than the 13,000 announced by Gavin Patterson, his predecessor. But what this will mean for BT's overall headcount, while it presses on with its all-fiber and 5G network investments, is entirely unclear. The only certainty is that BT's problems are not about to go away.