Revenue from telecom equipment worldwide was up for a fifth consecutive quarter during Q2, although the year-on-year rate of increase was much slower than Q1. A major drag in the second quarter was a slowdown in China, while revenue from optical transport and service provider routers fell a bit below expectations.

These were some of the headline findings from Dell'Oro Group in a report covering H1 2021, which pools together revenue trends from each of its various "telecommunications infrastructure programs."

The programs cover broadband access; microwave and optical transport; mobile core and radio access; and SP router and switch. Broadly speaking, these are much happier days for suppliers (at least in terms of overall market size) than Q1 2020, which, according to Dell'Oro, saw worldwide telecom equipment revenue decline 4% year-on-year as fallout from the pandemic began to take hold.

Taking the first six months of the year, preliminary Dell'Oro estimates indicate the overall telecom equipment market grew 10% year-on-year, but only 5% year-on-year during Q2. Revenue growth during Q1, again on a year-on-year basis, set a much more blistering 16% pace. Growth in the first half, reports the analyst firm, was driven mainly by strong demand for both wireless and wireline equipment, lighter comparisons and the weaker US dollar.

Improved market sentiment in the first half was apparently broad-based, with double-digit advancements in broadband access, microwave transport, mobile core networks, and RAN. There was also single-digit growth in SP routers.

The better times were not spread entirely evenly among suppliers and regions, however. Ongoing efforts by the US government to curb the rise of Huawei are starting to show in the numbers outside of China, noted Stefan Pongratz, vice president at Dell'Oro, not just for RAN but in other areas as well. 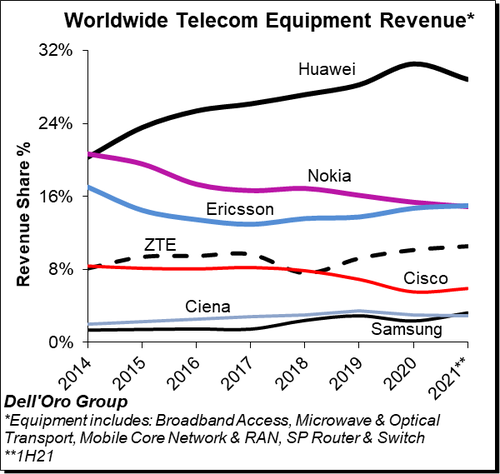 "Though Huawei is not able to procure custom ASICs for its telecom products, the supplier is assuring the analyst community its current inventory levels is not a concern over the near term for its infrastructure business", said Pongratz in a blog.

And while China slowed in Q2, Pongratz told Light Reading via email that "market conditions remained favorable in the US, with the collective results in the North America region growing between 10% and 15% year-on-year during the first six months of 2021, supported by strong growth in multiple segments, including RAN."

Ericsson overtaking Nokia was another notable development, although there weren't any massive changes in market shares among suppliers. "When it comes to the relative performance between Ericsson and Nokia, the competitive dynamics in the RAN market is a significant driver," said Pongratz.

Dell'Oro found that the collective global share of the leading suppliers remained relatively stable between 2020 and 1H21, with the top seven vendors comprising around 81% of the total market. Within the mix, Huawei and Nokia lost some ground between 2020 and 1H21, while Cisco, Ericson, Samsung, and ZTE recorded minor share gains over the same period.

Dell'Oro projects the overall telecom equipment market is projected to advance 5% to 10% for the full-year 2021, an outlook unchanged from last quarter.