Further signaling its intentions to pursue mixed-reality technologies and services, Apple has confirmed to CNBC and other media outlets that it has struck a deal to acquire NextVR, a once well-funded producer of live and recorded virtual reality content.

Coincidentally – or not – a report has also surfaced about Apple's purported plans to introduce its long-rumored augmented reality (AR) glasses as early as this fall.

Despite some key differences between VR and AR, it's entirely possible that the two will end up being interconnected as Apple prepares to push forward with its augmented reality product plans.

As for NextVR, Apple will get its mitts on a company that has gobs of intellectual property and technology for producing VR content, with the National Basketball Association, Fox Sports and Turner (now part of WarnerMedia) among its historical partners. Apple is buying NextVR, a company that had raised roughly $116 million, in a deal valued at about $100 million, according to 9to5Mac. 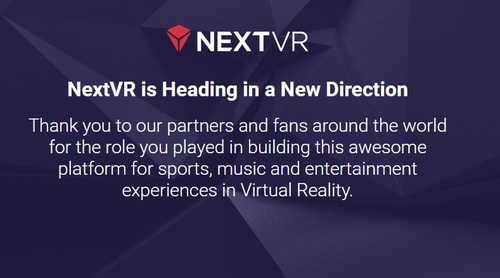 NextVR's home page doesn't say as much, but its next chapter will be written by Apple.

Founded in 2009, NextVR started to make some serious noise – and strike up those marquee partnerships – a few years ago, when lots of money was being tossed at new VR products and technologies. It's also when the entire sector, led by companies such as Facebook-owned Oculus, was being touted as The Next Big Thing.

According to 9to5Mac, Apple also plans to hire a bunch of valuable NextVR engineers. What's not clear yet is whether Apple will guide NextVR to evolve and adapt into a division that focuses more squarely on the production of AR content.

Colin Dixon, founder and chief analyst at nScreenMedia, believes Apple would be smart to shift anything involving NextVR to augmented reality. "I remain bullish on augmented reality, but not on virtual reality," he said, holding that VR will be largely relegated to "niche" status.

And getting NextVR and its IP and people/experience for $100 million could be considered a bargain. "That's a drop in the bucket for Apple," Dixon notes.

Apple, being Apple, was hush-hush regarding specific plans for NextVR. "Apple buys smaller technology companies from time to time, and we generally do not discuss our purpose or plans," an Apple official told CNBC.

Meanwhile, the bigger news is that Apple, according to Front Page Tech host Jon Prosser, is nearing the debut of first-gen AR glasses equipped with a LiDAR (light detection and ranging) scanner but no traditional cameras.

Prosser, who claims to have seen a prototype, said the product will be called Apple Glass and carry a baseline price of $499 (plus more when fitted with prescription lenses). He said data processing for Apple Glass will come from a pairing with the user's iPhone, a setup that's similar to how the first-gen Apple Watch is connected. 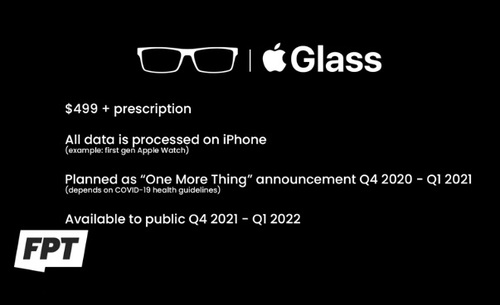 According to Prosser, Apple Glass, which will apparently aim to succeed where Google Glass stumbled, will use a UI called Starboard. The frames he claims to have seen were made of plastic, but he speculates that the final version will be made of metal.

Prosser said Apple intends to introduce Apple Glass in a "one more thing" type of announcement in Q4 2020 or possibly Q1 2021, depending on how COVID-19-related health guidance shapes up in the coming weeks and months.

Apple CEO Tim Cook has touted the consumer and enterprise applications of AR, a technology that it supports today on iPhones and iPads alongside an App Store with thousands of AR apps. "This is the reason I'm so excited about it, you rarely have a new technology where business and consumer  both see it as key to them," he said in January on Apple's fiscal Q1 2020 earnings call.

Like what we have to say? Click here to sign up to our daily newsletter
Related Stories
COMMENTS
Newest First | Oldest First | Threaded View
Add Comment
Be the first to post a comment regarding this story.
EDUCATIONAL RESOURCES
sponsor supplied content
MONETIZE THE ENTERPRISE-6 WAYS TO CAPTURE THE B2B OPPORTUNITY
THE 3 KEY DIGITAL MEDIATION CHALLENGES - AND HOW TO SOLVE THEM
APAC CSP BOOSTS EFFICIENCY OF ENTERPRISE OPERATIONS WITH CSG
vRAN Value Proposition and Cost Modeling
Educational Resources Archive
More Blogs from The Bauminator
Harmonic gets lift from agreement with big shareholder