Phobia about unhealthy ties to just a few big kit vendors is a common affliction among telcos. Fear of similar dependency on other suppliers has been far less evident.

But one of Europe's largest operators has a new plan to slash spending with systems integrators, like Accenture, and avoid the grip of a single public cloud, such as AWS. In pursuit of independence, Vodafone wants to add another 7,000 software engineers to its workforce by 2025.

Part of their job will be to write code for a new telecom-as-a-service (TaaS) platform, designed to ensure workloads can be ported between different public clouds.

"Developers are trying to develop as quickly as they possibly can, and they won't naturally think about how to build infrastructure that can work in three different cloud environments," says Scott Petty, Vodafone's chief digital and information officer.

"You need specialist teams to do that and present a set of microservices for developers to use, or they'll hard code to AWS or Azure."

The risk of public cloud "lock-in" is high if operators emulate technology firms like Netflix, which runs nearly all its computing on AWS.

In a filing with the US Securities and Exchange Commission earlier this year, the streaming giant warned investors that "we cannot easily switch our AWS operations to another cloud provider." Petty does not want Vodafone to be similarly stuck. 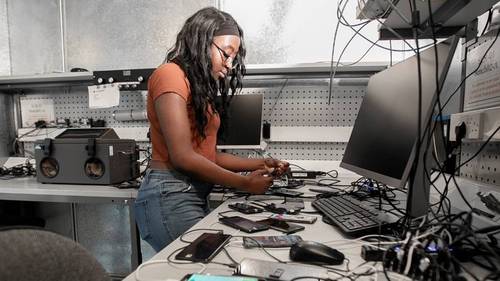 A Vodafone software engineering apprentice at work in the lab.

Headquartered in the UK, but with extensive international operations, Vodafone has taken a more cautious approach to the public cloud than some of its peers.

Petty rules out the sort of all-in deals that Dish Network and AT&T have announced this year. Dish, a greenfield operator building America's fourth mobile network, plans to run all IT workloads and network functions on AWS, while AT&T has chosen Microsoft Azure to host its 5G network.

"Our view would be that's too risky and that you are almost outsourcing a core competency," says Petty. "You need to be able to work effectively with all the key players and move workloads around."

Today, Vodafone has relationships with all three of the big US providers, developing edge services with AWS, using Google Cloud for analytics and buying other features from Microsoft Azure.

Is it feasible, though? Experts with an eye on the Netflix experience have insisted that moving workloads between the clouds can be an impossible task.

"It is if you don't think about it at the start, and you don't build the right tooling," says Petty.

"Of course, you want to leverage AWS features, but if we want to move to someone else then we have to present a microservice that looks like theirs."

The undercurrent of anxiety is that a problem at AWS would badly wound Vodafone if it could not move workloads around. Facebook's recent outage, which lasted about seven hours and was caused by human error, has shown that disaster can strike even the biggest Internet firms.

"They are also not immune to failure," Petty says about the public clouds. "That is the big lesson that most people have to learn. What happens when AWS has a failure? Have you lost your service, or have you got a way to continue?"

He doubts operators could resort to the private cloud, either.

"You need scale  failure tends to happen at periods of peak loads, in your busiest events," he says.

Vodafone already employs about 9,000 people in software engineering. The addition of 7,000, then, would give it a software team of around 16,000 people.

But more than half the new coders will be recruited internally and retrained, says Wibergh, while many others will be insourced contractors. Overall headcount at Vodafone, moreover, has dropped sharply in recent years, falling from about 111,700 in 2015 to just 96,500 last year, largely because of divestments.

Still, Petty insists the technology team will grow thanks to the software recruitment drive.

"The commercial benefit comes from reducing our dependence on systems integrators and spending less with them and developing more of our own capabilities and open architecture," he says. "Our headcount will grow, and our external workforce will reduce."

One goal is to avoid using systems integrators when deploying open RAN. These new-look networks should, in theory, allow Vodafone to combine multiple suppliers at a mobile site, instead of relying on one vendor's system, as it has traditionally done.

But that will mean stitching together lots of different technologies  work Petty wants to see done internally and not by a third party. Notably, there was no mention of a systems integrator when Vodafone announced suppliers for a UK open RAN deployment in June.

Vodafone reckons software "insourcing" and ownership of intellectual property will generate savings of about 20%, on average, and Petty says a "massive" amount has previously been spent on systems integrators.

"You only have to look at Amdocs, Accenture, TCS, IBM and look at their service provider revenues," he says. "Service provider for them is probably their biggest sector next to banking."

While IBM does not provide a detailed breakdown of revenues by industry, Accenture pocketed more than $10 billion from customers in the communications, media and technology sectors last year, while TCS made about $3.6 billion from them. Telecom-focused Amdocs recorded $4.2 billion in sales.

The software plan will be a major challenge for Vodafone. In recruiting externally, it will face competition for the best coders from Internet firms, banks and companies in numerous other sectors.

Nor is there any guarantee that retraining current employees will give Vodafone the skill levels it needs. Besides using software engineers on TaaS and for systems integration, Vodafone wants to see them develop new products and services  an area where telcos have not previously thrived.

The initiative has serious backing from company bosses, though, and is a follow-up to the major restructuring of its technology and IT estate that Vodafone announced a few months ago. Its aim is to replace the systems that cater to individual countries with tools and products that can be used or sold across the entire European footprint.

"These are significant changes we are doing on the operating model of the business," said Vodafone CEO Nick Read in February, during a call with financial analysts. "What we are doing is driving greater standardization across network and IT and digital."

This is one overhaul that other service providers will be watching closely.