It's time for telecom to worry about the public cloud

The public cloud giants are becoming rather like munificent dictators, attractive and terrifying in equal measure. Their "hyperscale" muscle makes their services hard to resist. It also means punier rivals stand little chance of competing. As the Internet consumes planet Earth, its three most ravenous purveyors  AWS, Google Cloud and Microsoft Azure  are growing all-powerful.

Telecom operators sound increasingly resigned to this fate of dependence on the US clouds. "We cannot pretend, because we don't have the scale to redo what they have been able to build with worldwide scale," said Michael Trabbia, the chief technology officer of France's Orange, in a recent discussion with reporters. His own company gave up any pretense last July when it struck a far-reaching deal with Google Cloud. Besides looking after various cloud-computing needs, the Internet giant will be developing analytics and machine learning systems for Orange. 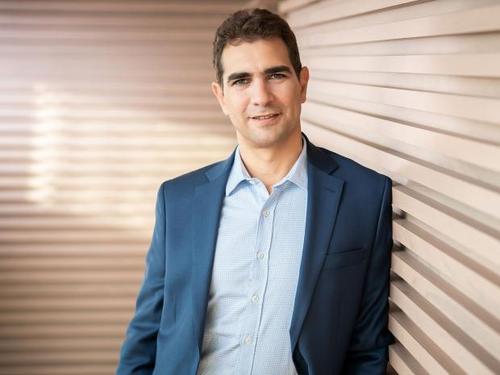 It sounds nearly identical to an analytics and cloud tie-up between Vodafone and Google Cloud that started in late 2019. Until then, Vodafone had used an on-premises data platform, about 600 physical servers and a comparatively feeble software system called Hadoop. Google Cloud and its unstoppable technologies are now the replacement for those ageing tools. Johan Wibergh, Vodafone's chief technology officer, told Bloomberg that his company could not have managed the job alone.

But the most comprehensive deal so far is a recent one between AWS and Dish, a US satellite company building a fourth nationwide mobile network in the US. It has stunned the industry with its decision to run just about all IT workloads and network functions in the public cloud. That was not the original intention, says Marc Rouanne, Dish's chief network officer, who at first had planned to entrust only the core and some operational and business support systems to the public cloud. "We came to the conclusion we can go further than we thought," he tells Light Reading. "So why replicate something they can do well?"

Heads in the sand

It is hard to fault the logic behind any of these deals. For years, the analyst community has panned and mocked telco efforts to fight more successful Internet companies in the market for consumer services. In 2021, any operator that tried to build its own artificial intelligence or public cloud platform would be accused of living in denial.

Nor, as some operators cozy up to the public cloud, can others simply pretend it does not exist. Thanks to the deal with AWS, Dish will be able to react better to its own customers' future demands for private network services, according to Rouanne. Moving data around the network, optimizing performance and slashing costs will also be easier, he says. At some point, older US service providers may struggle to compete unless they strike similar deals. 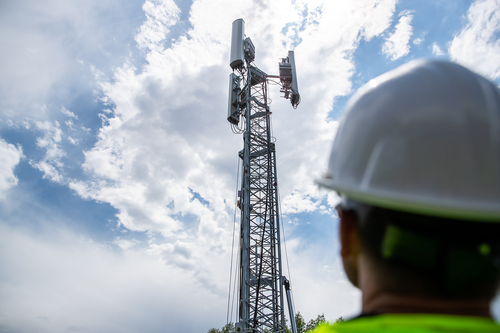 Dish is building a fourth US mobile network through a public cloud deal with AWS.

"It's a dangerous game to advise telco executives to put their heads in the sand and hide from the public cloud trend," said Danielle Royston, a self-proclaimed public cloud evangelist who runs a consultancy business called TelcoDR, in a recent newsletter. Taking issue with some criticism of the Dish and AWS tie-up by Light Reading and sister publication Telecoms.com, Royston says her public cloud "advice to telco execs is to understand how your competitors could use it and how you can best them by using it, too."

The immediate attractions are numerous. In the UK, mobile operator Three has said that moving IT workloads to Microsoft Azure will eventually reduce IT costs by one third (and IT headcount by the same amount). Analysts at New Street Research think Dish's all-5G network, engineered for and operated in the public cloud, will "have a unit cost that is just 25% of Verizon's." Vodafone will be able to crunch up to 50 terabytes of data inside the cloud each day in search of network and service improvements. The cost of running some systems will drop by 20% to 40%, according to a Financial Times story.

But the future risks cannot simply be ignored. For starters, any advantage an operator gains over its rivals will be short-lived if the entire telecom industry is eventually swallowed by the same public cloud giants. Without the sales growth that has been eluding them for years, operators in competitive markets would ultimately see their profit margins come under pressure once again.

Deals might unlock new sources of revenue growth, of course. Through a cloud partnership with Google, Telecom Italia hopes to generate about 1 billion ($1.2 billion) annually from selling new cloud services to business customers. In 2019, it made only 250 million ($304 million) in this market. New sales, however, will presumably have to be shared with Internet partners. And there is some wariness about letting the Googles and Amazons into the "edge," an extension of the cloud that brings it closer to end users.

Thanks to their nationwide real estate, operators once imagined they would have the upper hand in this area. By using edge platforms developed by the telecom industry, they could avoid heavy reliance on the Internet giants and retain most of the business, it was hoped. Deutsche Telekom aimed to create an industry "middleware" standard through MobiledgeX, a software subsidiary based in Silicon Valley. Edge Gravity, a platform developed by Ericsson, was another option.

This patently did not happen. Edge Gravity crash landed in May last year when Ericsson gave up on the business. "The gravitational strength of the edge offerings from public cloud providers, and the increasing alignment of CSPs [communication service providers] with them, seems to have put pay to Ericsson's ambition for edge, beyond supporting 5G," said Appledore Research in a blog at the time.

While it still appears to be in orbit, MobiledgeX has been a disappointment, too. The last time it announced anything with an operator was in January last year, and that was only a proof of concept with Japan's NTT DoCoMo. MobiledgeX, like Edge Gravity, appears to have lost out to Internet platforms such as AWS Wavelength, which has already called out Verizon and Vodafone as major clients.

The danger at the edge is a repeat of what happened in the consumer services market, where operators have retreated almost entirely from service and platform development and settled for a utility role as connectivity providers. Public cloud firms will inevitably commoditize the telecom industry as they take responsibility for edge platforms, automation, the rollout of artificial intelligence and anything else of real strategic importance.

Eggs in one basket

None of this would be half as worrying if there were more options in the public cloud market. Yet the scale that explains the appeal of the public cloud is also what limits competition. "To enter the market and reach the economies of scale needed to compete with the incumbents, infrastructure providers must invest significant capital and be able to offer competitive prices to lure customers," said the US House of Representatives in its October report about digital competition (or lack thereof).

In its latest research, analyst firm Canalys estimated that AWS, Google Cloud and Microsoft Azure accounted for about 58% of total cloud spending in the first quarter of this year. While this does not sound as bad as the situation in other markets, Synergy Research reckons dominance is more pronounced in the public cloud, where the top five  AWS, Microsoft Azure, Google Cloud, Alibaba and IBM  now control 80% of the market. AWS and Microsoft Azure, moreover, seem to be a long way ahead of their rivals. "These two don't have to spend too much time looking in their rear-view mirrors and worrying about the competition," said John Dinsdale, chief analyst at Synergy. 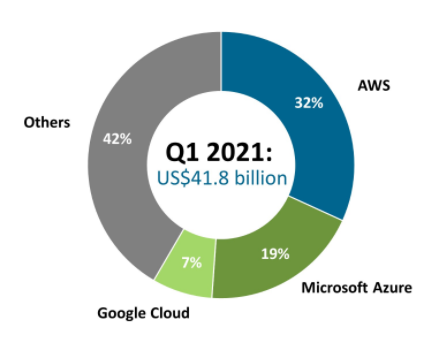 Unfortunately, even switching between the big five looks difficult. Snap, the company behind the Snapchat messaging service, runs most of its computing on AWS and Google Cloud and has noted that systems "are not fully redundant on the two platforms." Moving between those platforms or to another one entirely would "be difficult to implement" and cause Snap to incur "significant time and expense," it warned in its 2019 annual filing with the US Securities and Exchange Commission.

To avoid overreliance, James Crawshaw, a principal analyst with Omdia (a sister company to Light Reading), has advised operators to split IT workloads between providers and keep 10% of operational support systems in the private cloud. But a small survey he carried out drew some troubling comments about supplier "lock-in," something operators are desperate to avoid in other parts of the business. A big concern is that any multi-cloud deals would partly negate the cost benefits of using only one provider. 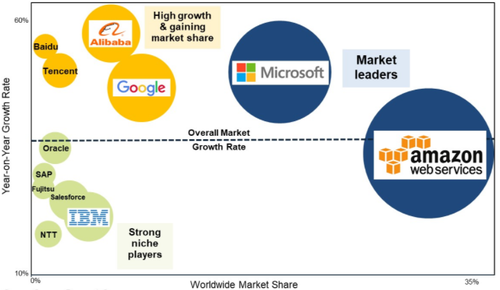 This seems to explain why Dish decided to commit everything to AWS. To mitigate the risks, Rouanne is maintaining a previous relationship with VMware, a subsidiary of Dell whose virtualization software would allow systems to be moved between clouds, if necessary. "We have onboarded all our software and we really can move where we want," he says. "We have made extremely good progress and that gives us a lot of agility. VMware will be in the mix at the edge and in the core."

Yet Crawshaw's survey also highlighted gripes about "abstraction layers" of this nature. While they are designed to ease portability between clouds, they might not support some of the most attractive cloud features, said respondents. And operators might simply be swapping cloud lock-in for dependence on these layers.

Today, there is little sign of panic about the public cloud. That is probably because it still accounts for only a fraction of total IT spending both inside and outside the telecom sector. "Though 2020 saw large-scale cloud infrastructure spending, most enterprise workloads have not yet transitioned to the cloud," said Blake Murray, a research analyst with Canalys, in a statement about the company's most recent data.

But now would be the time to worry. Gartner, another market-research firm, expects the cloud services industry to grow at three times the rate of the overall IT market between 2019 and 2022. Each week seems to bring further news of tie-ups between operators and public clouds. And the service providers with nothing to announce have effectively been warned by Royston that laggards will lose out.

Paradoxically, lock-in is a major issue in the telecom industry. In the radio access network, years of consolidation combined with recent restrictions on China's Huawei have left operators heavily dependent on Ericsson and Nokia. But equipment swaps are possible, as expensive as they might be. And alternatives to the Nordic vendors are now appearing. Escaping a public cloud's artificial intelligence system is unlikely to be so easy. If answers are to be found, the relative silence on that topic must end.