Software-as-a-service (SaaS) will make out like a bandit this year, potentially reaching $176.6 billion in end-user spending in 2022, according to Gartner.

The research firm anticipates steady growth within the SaaS segment as enterprises take different approaches to SaaS such as "via cloud marketplaces, and continue to break up larger, monolithic applications into composable parts for more efficient DevOps processes."

SaaS is still the largest public cloud services market segment, but infrastructure-as-a-service (IaaS) will be the fastest growing in 2022. Gartner predicts that IaaS will see the highest end-user spending growth this year at 30.6%, followed by desktop-as-a-service (DaaS) at 26.6% and platform-as-a-service (PaaS) at 26.1%. 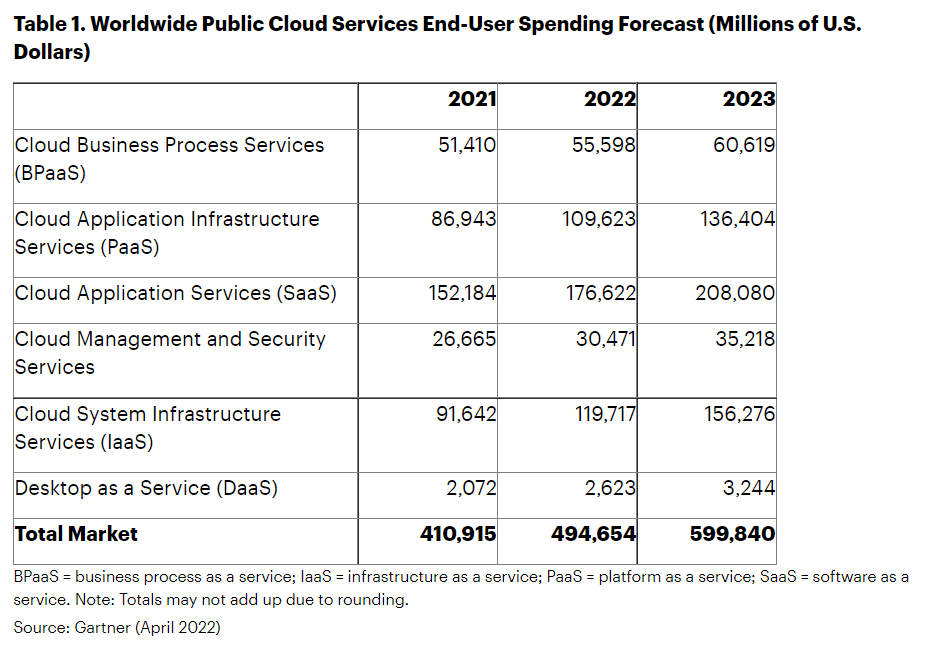 Market momentum for DaaS, which could reach $2.6 billion in spending this year, has been driven by the move toward hybrid work and the shift away from investment in desktops and other in-office devices and equipment, explains Gartner. In addition, increased demand for cloud-native applications is driving growth in PaaS, which could reach $109.6 billion in spending in 2022.

According to a recent survey by Flexera, 36% of enterprises spend over $12 million per year on public cloud services. The majority of enterprises are also looking for a managed approach to utilizing public clouds, with nearly two-thirds (63%) saying that they're working with cloud managed service providers (MSPs).

Cloud as an enabler

"Cloud native capabilities such as containerization, database platform-as-a-service (dbPaaS) and artificial intelligence/machine learning contain richer features than commoditized compute such as IaaS or network-as-a-service," said Sid Nag, research vice president for Gartner, in a statement. "As a result, they are generally more expensive which is fueling spending growth."

In addition, CIOs are "being thoughtful in their choice of public cloud providers" to target specific business and technology goals, explained Nag.

Emerging cloud technologies such as hyperscale edge computing and secure access service edge (SASE) are creating new revenue opportunities for public cloud providers, according to Gartner. Organizations that shift to the public cloud as a means to further their business and technology strategies will have the most success, Nag said.

"IT leaders who view the cloud as an enabler rather than an end state will be most successful in their digital transformational journeys," he said. "The organizations combining cloud with other adjacent, emerging technologies will fare even better."