Dish is not wedded to AWS after all

AUSTIN  Big 5G Event  Charlie Ergen's Dish Network is not so monogamous, it seems. Last year, the company building America's newest mobile network hitched itself to AWS as a cloud provider, leaving no apparent scope for affairs with any others. Just about all its network functions and IT workloads would be deployed on AWS, was the message. Only physical parts impossible to cloudify, such as antennas, seemed unaffected.

But Dish has been watering down the plan ever since and this week told the Big 5G Event crowd here that it is free to pursue other relationships if it wants. "We are hybrid multicloud," said Sidd Chenumolu, Dish's vice president of technology development, during an on-stage interview with Mike Dano, Light Reading's editorial director of 5G and mobile strategies. "One of our biggest principles is that an app should be loosely coupled to the underlying infrastructure so that apps can run on multiple clouds."

The desire to have other options seems to reflect concern about over-reliance on any one partner, something Dish seems eager to avoid with its multivendor rollout of a mobile network. Rather like Japan's Rakuten, Dish is taking advantage of new concepts like open RAN to mix and match suppliers. 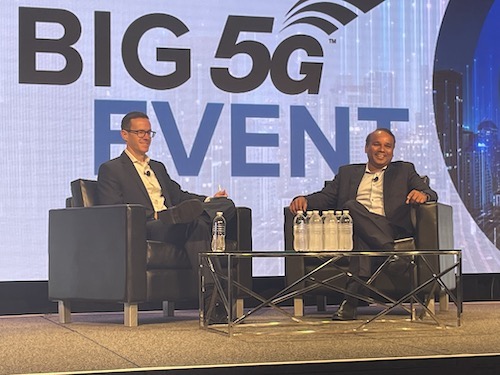 Where an operator would traditionally buy all its radio access network (RAN) products from a company such as Ericsson, Dish is combining RAN software from Mavenir for its distributed units (DUs) with radio units from suppliers such as Fujitsu, for instance. The heavy reliance on AWS as a cloud partner always looked incongruous with the rest of the plan.

"The principle we live with is openness and we can't have lock-in anywhere  in core or RAN or public cloud," said Chenumolu in response to questions. "We would like to maintain flexibility. We don't know where the use cases will be, so it doesn't make sense to be locked into a cloud or a RAN vendor or anything. It is all about flexibility."

Fear of lock-in is not the only issue for Dish. In a detailed blog published in February, the operator indicated that various RAN components sit outside the AWS cloud. Mavenir's RAN software, notably, sits on a platform developed by VMware, a provider Dish has continued to use from the beginning.

Last year, Marc Rouanne, Dish's chief network officer, told Light Reading that VMware's virtualization software would allow systems to be moved between clouds, if necessary. "We have onboarded all our software and we really can move where we want," he said. "VMware will be in the mix at the edge and in the core."

Mavenir has already pre-integrated its technology with VMware's platform and deploying RAN software in the public cloud does not appear to be a straightforward task. Rakuten, which is pitching its technologies to other carriers, last week revealed that running its Altiostar RAN software on other clouds is a challenge.

"There is one part of the radio that for the short term we want to run on our own cloud and that is the DU and only that part," said Tareq Amin, the CEO of Rakuten Mobile, on a call with analysts and reporters. "The complexity to run radio on the DU needs quite a bit of integration." Altiostar, intriguingly, was originally named by Dish as a DU software supplier alongside Mavenir, but it has been far less visible than its rival on the Dish project ever since.

Internet messaging provider Snap has drawn attention to the risks of being tied to one cloud provider for specific workloads. "Any transition of the cloud services currently provided by either Google Cloud or AWS to the other platform or to another cloud provider would be difficult to implement and would cause us to incur significant time and expense," it said in its last quarterly filing with the US Securities and Exchange Commission.

The big question for Dish (and other carriers) is whether it can ever be completely independent. While abstraction layers such as VMware's may be designed to ease portability between clouds, there has been industry concern they might not support some of the most attractive cloud features. More importantly, if operators are merely swapping cloud lock-in for reliance on these layers, they sound like another potential choke point.