Amazon eats more of the world as Facebook starts to rot

Evidence the world is turning into Planet Amazon comes on page four of the tech giant's latest earnings release. The Nasdaq exchange, Best Buy, Goldman Sachs (the vampire squid), Fannie Mae (of subprime fame), Pfizer (of vaccine-profiteering fame) and United Airlines are listed as just a few of the most high-profile companies relinquishing IT control to AWS, the world's largest provider of public cloud services.

Even Facebook is at it. "Meta, the parent company of Facebook, Instagram and WhatsApp, selected AWS as its long-term strategic cloud provider to accelerate artificial intelligence research and development," gabbled Brian Olsavsky, Amazon's chief financial officer, on yesterday's earnings call. Anyone who swallows the blue pill, opting to live in Facebook's metaverse of censored virtual-reality content, will inadvertently rely on Amazon expertise.

Right now, this dovetailing between two of the world's best-known tech stocks is at odds with their fortunes. Amazon's profits nearly doubled year-on-year for the final quarter of 2021, to about $14.3 billion, with sales up 9%, to $137.4 billion. After falling 7.8% yesterday before markets closed, its share price reared up 14.3% in after-hours trading.

There was no such bounce for the social network led by Mark Zuckerberg after profits fell 8% (building that metaverse ain't cheap) and user numbers dropped for the first time ever. The stock had nosedived 26.4% by the time traders had packed up for the day, a drop that represents $232 billion in value. You can guarantee that some investors will be wondering if this necrosis is irreversible. Social networks have perished before, although never one so huge. And others may be thinking now is a good time to buy shares.

But the public cloud, the engine of Amazon's growth, is a far more impregnable fortress. Scale is everything in that business  hence the horrid word "hyperscaler"  whereas in social media it can be a drawback (skateboarding teens don't want to hang around in the same online community as crusty oldsters). Outside China, only Google and Microsoft are viable competitors. The market shares of IBM and others are dwindling, according to the latest data from Synergy Research Group.

Companies have rationalized that spending money with public cloud providers is more economical than investing in their own private clouds. Anything they can do, the public cloud oligopoly can probably do better in a world that worships the Internet. And the economic pain many organizations have endured throughout the COVID-19 pandemic has made cost-cutting a priority. To hell with any worries about security, Internet outages or Big Tech hegemony. "Enterprises are now spending twice as much on cloud services as they spend on their own data centers," said John Dinsdale, a chief analyst at Synergy. 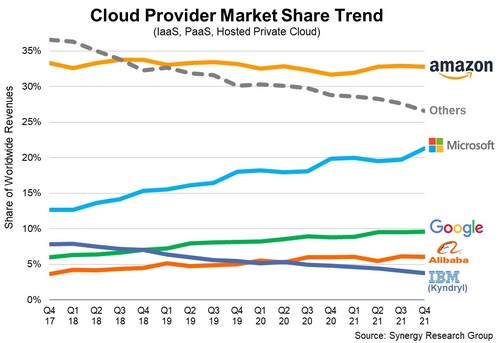 What Olsavsky called "the acceleration of companies going to the cloud" generated an extra $5 billion in sales for AWS in the final quarter, compared with the year-earlier one, lifting them to about $17.8 billion. And net income at the highly profitable venture rose 49%, to nearly $5.3 billion. The profit margin of 30% is treble the number for the overall business.

The AWS order backlog is now huge, rising to $80 billion from $66 billion at the end of the third quarter. The Facebook contract is partly responsible, according to Rohit Kulkarni, an analyst at MKM Partners. "We think that the recent Meta-AWS contract contributed to this chunky jump, likely accounting for >$5 billion of these future obligations, in our opinion," he said in a research note.

Any concern for AWS is likely to be over the challenge coming from Microsoft. Its market share is up nine percentage points since the end of 2017, according to Synergy's data, hitting 21% in the recent quarter. Amazon's share over that period has barely moved between 32% and 33%. Google is also on the attack, although it remains a lot smaller than its rivals with about 10% of the market.

But many other challengers are still relative weaklings. Hurt by US sanctions, and desperate to diversify beyond the manufacture of telecom equipment, China's Huawei accounts for just 1% of the global market. For governments and organizations outside China that worry about data sovereignty, it is an even scarier prospect than a US provider.

And yet Europe's public cloud response is laughable. In September 2020, the important-sounding Gaia-X project was described by EU president Ursula von der Leyen  an especially useless politician in an era of mediocrity  as an effort to "build a European cloud." It has barely had an impact. Meanwhile, Deutsche Telekom, one of Europe's largest companies, thinks the answer to the data sovereignty conundrum is to use Google under strict supervision. Go figure.

No one really stands a chance, because no one on today's cash-strapped planet has the financial clout that public cloud demands. For the first time ever, Amazon provided a breakdown of capital expenditure, revealing that $24 billion of last year's $60 billion budget went toward IT infrastructure or data centers. That was more than Amazon spent on either warehouses or transportation, and the figure is expected to grow.

On the same day results were published, Amazon's founder was creating a different kind of stir in the Dutch city of Rotterdam. One of the city's oldest bridges is reportedly being dismantled to make way for a 412-foot superyacht  one that is even equipped with a helicopter landing pad  owned by Jeff Bezos. Residents and local politicians are aghast. For all the talk of Internet value creation (and future bridge rebuilding), Amazon looks just as swaggeringly destructive to critics as the man who started it off. Like founder, like firm, perhaps.