Nvidia's drawn-out attempt to acquire Arm must have provided some buttock-clenching moments for Huawei's rotating chairmen before it eventually failed.

As a UK-based company under the ownership of Japan's SoftBank, Arm has continued supplying its essential blueprints to the Chinese equipment giant. A takeover by California's Nvidia threatened to cut Arm off entirely.

A seemingly permanent fixture on the US trade blacklist (the so-called Entity List), Huawei has been unable to buy much US technology, or even technology with US connections, since Donald Trump sat in the White House.

While it has been able to exploit some loopholes, it can no longer rely on Intel for server chips or Taiwan's TSMC  which has US products in its factories  as a contract chipmaker.

Denied access to these and other companies, Huawei has watched its sales collapse and sold off its worst-hit units.

But the troubling prospect of an Arm embargo has resurfaced. Regulatory opposition forced Nvidia to abandon its $40 billion takeover attempt  the rationale being that Arm would lose its treasured impartiality if it were owned by one of its various licensees.

Instead, SoftBank is now pursuing plans for an initial public offering sometime in the next year. Masayoshi Son, SoftBank's CEO, is said to prefer the idea of listing in New York. 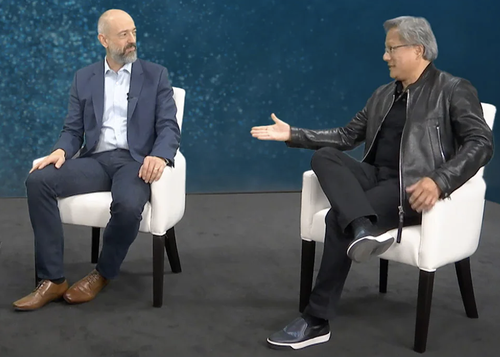 That has reportedly prompted what may sound like an oxymoron  a Boris Johnson charm offensive to persuade SoftBank of London's attractions.

Regardless of the UK prime minister's intervention, the possibility exists that Arm's future shareholders include a group of mainly US licensees  the likes of Nvidia along with Broadcom, Marvell and Qualcomm, say. Arm would be UK-based with US technology owners.

"If Arm has an independent future, I think you will find there is a lot of interest from a lot of the companies within the ecosystem, including Qualcomm, to invest in Arm," he was reported to have said at the time by the UK's Telegraph newspaper.

What remains unclear, and would be for lawyers to determine, is whether an Arm based in the UK but under the control of US technology owners would be subject to Entity List rules regarding Huawei.

The blueprints Arm sells to Huawei are presumably not classed as US-origin technologies, but future designs might be if they are produced with the backing of Arm's new technology owners, for instance. Conversely, some US suppliers were able (at least initially) to continue serving Huawei from facilities based outside the US.

Evidence Huawei continues to buy technology from companies based in the US came only this week in a filing by Lumentum, a designer of optical components with headquarters in San Jose.

Reporting overall sales of about $1.15 billion for the nine months to April, Lumentum flagged a $7.7 million "decline in demand" from Huawei over this period.

Lumentum did not indicate precisely what Huawei spent in this quarterly filing, saying only that its business with the Chinese company "has been and will continue to be more limited than it was in the past."

But in its last annual report to the US Securities and Exchange Commission, Lumentum revealed that 10.8% of its revenues were generated from sales to Huawei in the 12 months to July 2021, down from 13.2% the previous year and 15.2% the year before that.

This means it derived about $188 million from Huawei in its last fiscal year.

Another issue for Arm is its renegade Chinese subsidiary. Set up after SoftBank's takeover of Arm in 2016, Arm China is a joint venture with Chinese investors, in which Arm holds a 47.3% stake, according to a recent Financial Times story.

For two years, Arm has been struggling to oust Allen Wu as Arm China's CEO and replace him with more amenable executives. Having reportedly acquired a big stake in Arm China, Wu is said to have blocked Arm's access to local accounts, creating a barrier to IPO plans.

China's authorities seemed happy to let this standoff continue, perhaps fearing China would lose access to Arm blueprints if the IPO went ahead.

All that appeared to change last week. In a statement, Arm said Renchen Liu and Eric Chen had been appointed co-CEOs of Arm China following a "unanimous vote" by Arm China's board of directors.

According to press reports, Arm had previously been transferring shares in the Chinese subsidiary to SoftBank, diluting its own stake to less than 20%. Chinese opposition to Wu's replacement may have crumbled as officials began to worry about Arm's commitment to the joint venture.

With Wu seemingly out of the way, Arm was ready to allay that concern in its statement about the new appointments. Saying it is "committed to the Chinese market," it went on to promise that "Arm China will continue to be the exclusive commercial distribution channel for Arm to license its IP [intellectual property] to Chinese licensees."

Arm China will also be able to keep developing its own IP, Arm added. In the latest twist, however, Wu is apparently refusing to vacate the premises.

Arm's latest messages about China must sound reassuring from Huawei's perspective. But if Arm gains US technology owners during an IPO next year, and is stopped by Entity List rules from maintaining its current relationship with Huawei, then US authorities could feasibly pursue Arm China for breaching sanctions.

A precedent for this may already exist with a US investigation into YMTC, a Chinese maker of memory chips. The argument there is that YMTC may have broken rules by selling chips made with US equipment to Huawei.

By the same logic, Arm China could be accused of violating sanctions if it were to provide Huawei with blueprints based on Arm's IP.

This is all speculative, of course. What isn't is just how critical Arm is to Huawei. The current estimates are that Arm blueprints are used for about 95% of smartphone designs.

Cut off from Google's software products and TSMC's silicon, Huawei sold Honor, a now-thriving smartphone brand, and reported a halving of sales at its consumer division last year, generating about 243.4 billion Chinese yuan ($36.8 billion) in revenues. Without Arm, that unit could become untenable.

So might parts of Huawei's $42.4 billion carrier business. Much of the equipment used in the world's radio access networks also features Arm designs.

"The odds are that if you open up any of these hardware boxes today, the dominant CPU [central processing unit] architecture is Arm," said Panch Chandrasekaran, Arm's director of 5G carrier infrastructure, during an interview with Light Reading last June.

The other vulnerability is on the server side. Unable to procure x86 chips from Intel, Huawei was forced to sell xFusion, a server business, in November 2021. Data from Omdia (a sister company to Light Reading) shows a 44% year-on-year drop in Huawei's server revenues for the third quarter of that year, to $768 million.

But Huawei still needs server chips for its cloud business, positioned by the Chinese company as a growth opportunity. Today, the only realistic alternative to Intel and AMD, another US company, is Arm and its blueprints, which Huawei has used to produce its own Kunpeng-branded processors. Minus Arm, Huawei would not have a leg to stand on.