What to expect from the C-band auction for 5G spectrum

The FCC's C-band auction of a massive 280MHz of spectrum  spanning 5,684 midband licenses between 3.7GHz and 3.98GHz  is scheduled to start December 8. 5G operators such as Verizon are vibrating with anticipation.

After all, it's likely to be a blockbuster event: Some analysts expect the auction to become the FCC's biggest ever, surpassing even the $45 billion raised in 2015 by the AWS-3 spectrum auction.

However, as any Las Vegas gambler knows, predicting the results of this kind of contest is difficult. For example, the financial analysts at New Street Research believe C-band bidders will dole out a total of $51 billion in bids, which is about $21 billion more than what is predicted by the analysts at Raymond James. And FierceWireless reported that the analysts at Morgan Stanley Research recently raised their C-band expectations to around $26 billion, with their high-end estimates at $35.2 billion.

Indeed, estimates for the FCC's recent 3.5GHz CBRS auction  which offered a much smaller amount of spectrum, albeit with some similar characteristics  ranged from around $2 billion to $10 billion. The event ended this summer with around $4.4 billion in winning bids.

Regardless, all eyes are on the C-band auction because it is the first big auction of valuable, unencumbered midband spectrum licenses in the US. Such spectrum is highly prized among 5G network operators globally that are looking for a balance between broad geographic reach and blazing-fast speeds.

Most of the top players in the US wireless industry are participating in the C-band auction. Verizon is widely expected to walk away with the bulk of the licenses up for grabs.

The financial analysts at MoffettNathanson expect Verizon to spend roughly $16 billion for around 100MHz of C-band spectrum. Verizon recently raised around $12 billion for possible spectrum purchases.

That's because Verizon  which is the biggest mobile network operator in the US in terms of customers  also has the least amount of lowband and midband spectrum holdings. It needs the C-band to catch up to its rivals. 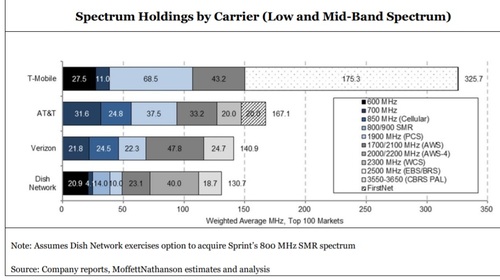 Verizon trails its rivals in terms of midband and lowband spectrum ownership. Click here for a larger version of this image.
(Source: MoffettNathanson)

It's unclear how much money T-Mobile and AT&T might spend on C-band licenses. T-Mobile already commands vast holdings in the 2.5GHz band because of its purchase of Sprint, which might limit the amount of money T-Mobile might want to spend on C-band licenses (though T-Mobile is expected to bid up C-band prices to make sure Verizon doesn't walk away with a deal). Meanwhile, AT&T's financial situation  and its focus on HBO Max  might dampen its C-band enthusiasm.

The financial analysts at New Street Research speculated that AT&T will spend $12 billion to acquire 80MHz of C-band spectrum, while T-Mobile will spend $10 billion to buy 60MHz of spectrum. 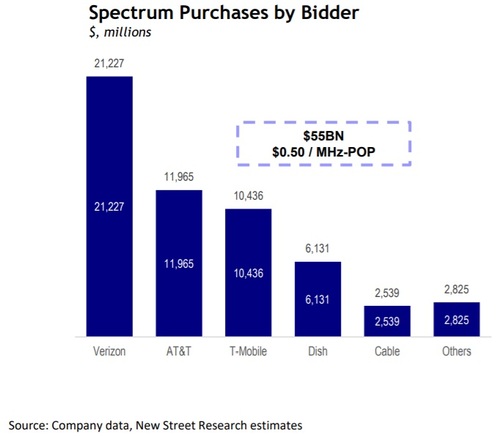 Verizon is expected to be the big spender during the C-band auction. Click here for a larger version of this image.
(Source: New Street)

And Dish Network  which entered the US wireless industry earlier this year via the $1.4 billion purchase of roughly 9 million Boost Mobile customers from T-Mobile  is also scheduled to participate. Dish has participated in virtually every FCC spectrum auction for the past decade, and now commands lowband and midband spectrum holdings almost equal to those of Verizon. The company has not yet offered any major commercial mobile services using its holdings.

The 57 entities scheduled to bid in the C-band auction also include a number of smaller players. For example, UScellular recently issued $500 million in notes in part to finance "the purchase of additional spectrum." And Canopy Spectrum  a venture between Jennifer Fritzsche (a former Wells Fargo analyst) and Edward Moise Jr. (a longtime spectrum investor)  has raised $235 million, according to SEC filings, though a source familiar with the company's activities indicated that number is now outdated.

As in previous FCC spectrum auctions, the C-band auction will include several rounds of bidding per day until bidders stop bidding  many expect that to happen sometime early next year.

As in previous FCC auctions, no one will know which entities are bidding for which licenses during the auction. The FCC will only disclose the amount of each bid on each license during each round. The agency will announce the winners, after tabulating the results once the auction is over.

What will the winners get? 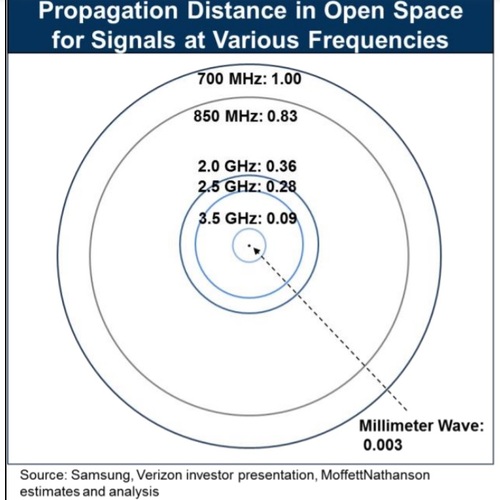 Signals in midband spectrum generally have much better propagation characteristics than signals in highband, mmWave spectrum. Click here for a larger version of this image.
(Source: MoffettNathanson)

However, perhaps the most important factor governing the performance of 5G is the amount of spectrum devoted to the service. For example, most 5G networks running in lowband spectrum only span 10MHz or 20MHz. Meantime, some highband, mmWave networks run across a block of 100MHz or more of spectrum. This is the primary reason highband 5G networks are often much faster than lowband 5G networks.

When will C-band auction winners start using the spectrum?

The C-band is currently being used by several satellite companies, including Intelsat and SES, to transmit TV and radio services across the US. Their operations will need to be moved off the 3.7GHz-3.98GHz licenses being auctioned before auction winners like Verizon can use that spectrum.

In a major ruling, the FCC earlier this year agreed to give almost $10 billion to incumbent C-band users like SES and Intelsat if they move off the band quickly. The satellite operators will be eligible for that "incentive" money if they can clear around 120MHz in 46 of the top 50 US markets by December 2021, and the remainder by December 2023.

Verizon officials have said they believe they can begin offering C-band 5G services as early as the end of 2021. The operator will likely start doing so first in dense, urban areas, where its towers can be quickly upgraded with C-band equipment.

Already vendors like Nokia and Samsung are building C-band equipment for such networks.

Of course, the spectrum and the network are just two pieces of a bigger C-band puzzle that operators will need to assemble before they can start making money from C-band services. Importantly, customers too must have phones that can receive C-band signals. The analysts at MoffettNathanson noted that the Apple iPhone 12 is the only major US handset that supports the C-band, "though more will come with time," they wrote.