US case against Huawei CFO may be wobbling

On December 1, 2018, as she was preparing to fly out of Canada, Meng Wanzhou was stopped by officials at Vancouver's airport and prevented from boarding her plane. The chief financial officer of China's Huawei, and daughter of company founder Ren Zhengfei, Meng stood accused by US authorities of lying to HSBC about her company's relationship with Skycom, an equipment maker that sold products into Iran. She has been fighting a US extradition request ever since.

But the courtroom battle that has dragged on for more than two-and-a-half years could shift onto new ground this week. On July 9, Canada will decide on the admissibility of documents that Huawei says are integral to its defense, providing proof of Meng's innocence. They include reams of correspondence between Huawei and HSBC that were previously held by the bank. From Huawei's perspective, they undermine the entire case against its CFO.

In Huawei's view, the HSBC trove of information establishes beyond doubt that senior executives within HSBC knew exactly what Skycom was to Huawei  not merely a business partner or affiliate, but a company that at one time was under its control. If Huawei can prove this, the US extradition request, which rests wholly on the case that Meng is guilty of fraud, would be on shaky foundations. 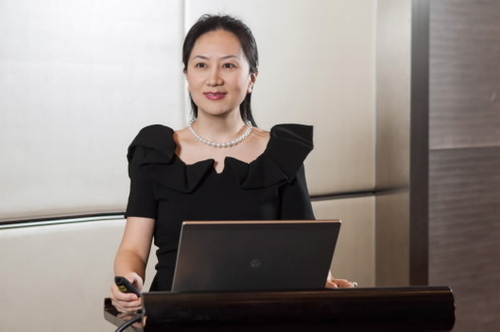 Huawei CFO Meng Wanzhou has been detained in Canada since late 2018.

Huawei had failed to gain access to the HSBC documents at a London hearing on February 12. But they were finally released into its possession in April after a court in Hong Kong took its side. The agreement with HSBC at the time was that none of the documents would be made public. Huawei quickly went to the Canadian courts and asked them to uphold this agreement in law. On June 14, it lost a case that some might say it never hoped to win.

While the latest decision does not mean any HSBC documents can be admitted as evidence, it does make them publicly available for the very first time. The immediate question, then, is whether they are as explosive to the US case against Meng as Huawei seems to believe. Viewed by Light Reading, the documents largely comprise several hundred pages of emails, mixed in with news reports and copies of Skycom bank accounts. Parts have been redacted, including the names and job titles of HSBC executives.

In control of the Skycom accounts

What the documents clearly indicate is that the nature of Huawei's relationship with Skycom was a discussion point and concern for bank executives. A Reuters news story dated December 30, 2012, about Huawei's links to Skycom is circulated between HSBC employees in early 2013. The executive who emailed the story writes: "Please see below Reuters story on Huawei, self explanatory. Most grateful if you could obtain an update from the company."

A report prepared by HSBC's reputational risk committee in March 2014 also shows it knew about Huawei's stake and Meng's role in Skycom before 2010. "In response to the claims, Huawei advised HSBC that its shareholding in Skycom was sold in 2009 and that Cathy Meng (CFO Huawei) resigned her position on the board of Skycom in April 2009."

HSBC executives were also aware that by May 2012 Skycom was wholly owned by Canicula Holdings, a company incorporated in Mauritius, and that Canicula was linked to Huawei. An email sent by one HSBC employee to others in early 2013, bearing the subject line "Fw: Huawei  Skycom Tech Co Ltd," indicates that HSBC staff were in talks with Huawei about the closure of Skycom accounts. Why would they do this if Huawei was not the ultimate controller of those accounts?

Despite all this, the documents do not create the impression of complete transparency on Huawei's part. Organizations that have nothing to hide do not typically deal in disreputable nations through front companies. The emails suggest some HSBC executives were asking lots of questions as they strove to understand the connection between Huawei and Skycom. "Do you know whether Skycom Tech. Co Ltd is related to the Skycom company mentioned in the Reuters articles?" says one.

There is some optimism within Huawei that Canada will allow at least some of the HSBC documents to be admitted as evidence on July 9. It would then be up to the Canadian court system to decide if these are exculpatory, undermining the US extradition case against Meng.

One issue could be whether only junior HSBC employees knew about the relationship between Huawei and Skycom, meaning senior bank executives and the wider organization remained largely ignorant. The US appears to have shifted its position since proceedings began to focus on this distinction.

Huawei insists an executive identified only as "HSBC employee 7" in the documents works at managing director level within the bank and was in possession of all the facts about Huawei and Skycom. Her name has been redacted in the documents, but she appears to have been a recipient of numerous pertinent emails, including the one about the closure of Skycom accounts.

Still, Huawei representatives make the not-unreasonable point that Meng cannot be held to account for how information is disseminated within HSBC. If HSBC's risk committee was unaware of all the facts, it is not Meng's fault because she never had dealings with the risk committee, they point out.

The backdrop to all this seems to be the US assumption that Huawei's transactions through HSBC were not compliant with sanctions law. Regardless of the reasons for that, Huawei's argument is that if HSBC were fully aware of its relationship with Skycom, and knew Skycom operated in Iran, then any transactional violations are entirely the fault of the bank, not Huawei.

How might sanctions have been violated? The Reuters report published in December 2012 claimed to have unearthed documents showing that Skycom offered in late 2010 to sell equipment made by Hewlett-Packard, a US IT company, to an Iranian telecom operator. If this were true, and Huawei controlled Skycom bank accounts at the time, it could amount to a breach of US laws prohibiting the sale of American technology to Iran.

It was for similar activities that ZTE, a Chinese rival to Huawei, was hit by two successive $1 billion fines just a few years ago and prevented from acquiring the US components it needs for its network equipment. The ban nearly drove ZTE out of business before it was eventually lifted.

Huawei, however, is already subject to restrictions, blocked even from buying products based on US intellectual property. Trade sanctions introduced by former US President Donald Trump, on the grounds that Huawei is a Chinese threat to the security of the US and its allies, have been maintained and even tightened up by Joe Biden, Trump's successor in the White House. Huawei has already been forced to adapt its operations and would presumably never agree to pay a US fine, as ZTE previously did. This arguably makes the case against Meng far less important as a US salvo against Huawei.

What the HSBC documents do not prove or disprove is that Skycom did offer to sell US technology to Iran. Without clear evidence of wrongdoing on that front, HSBC's efforts to block the release of documents are curious. One likelihood is that it was desperate to stay in the US government's good graces, and avoid any reputational damage, after previous misdemeanors. Before 2012, it was being referred to as a "gangster banker" in media stories that explored its earlier relationship with the Sinaloa drugs cartel in Mexico.

Meng still lives under partial house arrest in Vancouver, free to visit parts of the city but not to leave it. A final ruling on her extradition to the US is promised in October or November. But no one should expect the long-running legal affair to wrap up this year. Whichever way the decision goes, appeals are likely to follow.