Cox Communications' claim that the music industry "is waging war on the Internet" will reach a vital phase this week as a court hears oral arguments on Cox's bid to reverse or, at a minimum, vacate a $1 billion judgment that's been hanging over the cable operator's head since late 2019.

The case stems from an original complaint filed by several major music labels, including Sony Music, Warner Music Group, EMI and Universal Music Group, arguing that Cox did not do enough to stop broadband customers from infringing copyrighted works. In all, Cox was held liable for infringement on more than 10,000 songs and fined almost $100,000 for each piece of work.

A US District Court judge upheld the $1 billion verdict in January 2021.

Cox has appealed the case to the US Court of Appeals for the Fourth Circuit in the Virginia Eastern District Court, arguing that the district court was wrong about what it means to be secondarily liable for copyright infringement violations by its customers, and that the core damages themselves are excessive.

Oral arguments before a panel of judges in the Fourth Circuit are set for this Wednesday (March 9). A ruling is not expected until the late spring, but it's pretty clear that one side or the other will not be jazzed by the outcome. And it doesn't represent a last gasp. There's no guarantee how either side will react to a verdict, but it's possible that one side could ask a district court to retry the case or petition the US Supreme Court.

Other ISPs are facing the music

Although Cox is the focus of this case, it's not the only broadband service provider that's been targeted by the music industry over this legal theory. The concept is that an ISP should be held accountable for secondary infringement if it's found they did not do enough to prevent customers from violating copyrights.

Frontier Communications, Charter Communications and RCN and Grande Communications (both now part of Astound Broadband) are also fighting similar court battles. Thus, the entire broadband industry, including wireless service providers, will be watching the Cox case closely. If Cox loses again, there are concerns that it could have a cascading effect  pushing ISPs to take less-than-consumer-friendly actions such as terminating user accounts more aggressively or instituting surveillance capabilities that could prompt consumer privacy concerns.

In its opening brief filed last fall, Cox argued that it has done and continues to do what it can to protect copyright and has invested "significant resources in education and deterrence." That included an automated system for contacting subs when Cox receives a notice of infringement. But Cox claims the music industry now insists that ISPs also terminate any account that infringes more than once.

Cox also views the $1 billion verdict as a grossly excessive financial penalty. It notes that had subscribers paid the going rate of about $1 per download, the total profits of the plaintiffs from all the downloads at issue would have been $692,000. Cox also points out that it receives no "direct financial benefit" from infringement. 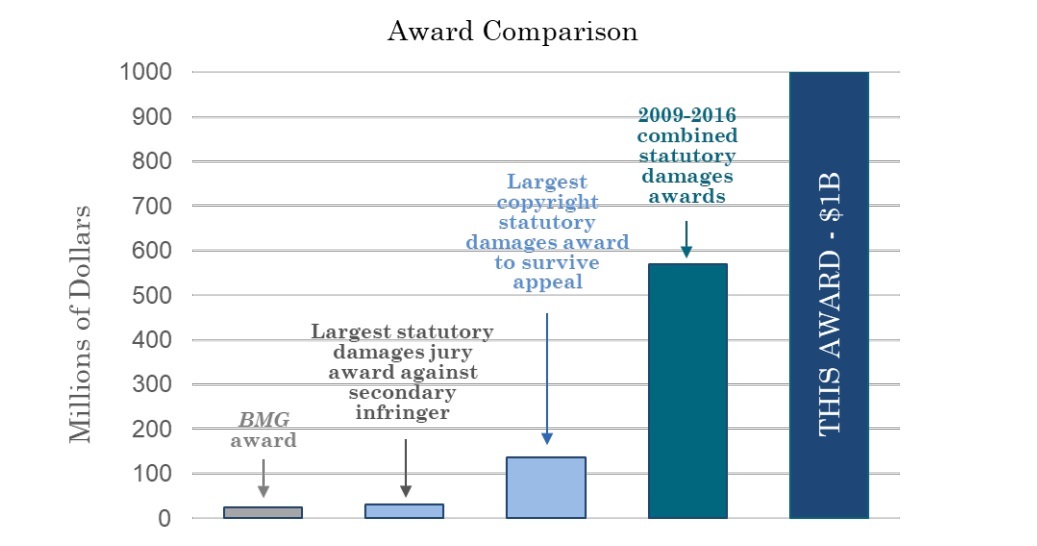 Cox also stressed that it couldn't monitor subscribers to the point that it would be condemned for a gross violation of privacy. Cox adds that it also can't selectively block users from downloading peer-to-peer software and using it to download songs, or predict which customers will ignore warnings not to infringe.

Cox did build a system designed to handle copyright infringement complaints called the Cox Abuse Tracking System, or CATS, that used a graduated response program and escalating steps to contact subscribers and prevent further infringement. Cox said CATS' email warnings ended infringement 78% of the time, while phase two (automated suspension of service) brought the success rate to 95%. Terminating service is used only as a last resort, and Cox estimates that it only took things that far "a few dozen times" in 2013 and 2014.

Before this situation came to a head with Sony Music et al., BMG Rights Management alleged in 2014 that Cox was secondarily liable for subscriber infringements, and the parties ultimately settled the matter in 2018. Just prior to that settlement, the Sony group filed its suit against Cox.

The Electronic Frontier Foundation argued last year that the decision against Cox, if upheld, would violate due process and would do harm to consumers as well as other ISPs.

"If not overturned, this decision will lead to an untold number of people losing vital internet access as ISPs start to cut off more and more customers to avoid massive damages," the EFF said.