After a 16-month investigation, US lawmakers have released a scathing report calling for curtailing the "monopoly power" of tech titans such as Apple, Amazon, Google and Facebook.

"These firms have too much power, and that power must be reined in," said the Congressional panel.

The 449-page report by the Antitrust Subcommittee of the House of Representatives' Judiciary Committee called for the biggest shakeup of US competition laws since the Hart-Scott-Rodino Act of 1976 allowed for a government review of mergers.

Silicon Valley's biggest companies "began as scrappy, underdog startups that challenged the status quo," said the legislators. But they now have become the "kinds of monopolies we last saw in the era of oil barons and railroad tycoons."

Among other findings, the report said Facebook had a data advantage allowing it to "acquire, copy or kill" possible rivals. Google, it said, favored its own content ahead of other websites. Amazon prioritized its own products over ones from third-party sellers, as did Apple in its App store.

The report is significant because it may signal what direction US policy may possibly take after the November elections.

Current polling suggests Democrats could win back the White House and retain control of the House of Representatives. The Dems could also end up with a slim lead in the Senate, or a tied result, which permits the vice president to break ties.

The slim majority either party is likely to command in the Senate will make the House a key battleground in reforming US antitrust law, the body of legislation promoting vigorous competition in the economy.

The corresponding panel in the Senate, the Senate Judiciary Subcommittee on Antitrust, Competition Policy, and Consumer Rights, said it also would be holding hearings on reforms in US antitrust law.

Meanwhile, the US Justice Department began briefing state attorneys-general about imminent plans to launch an antitrust lawsuit against Google. 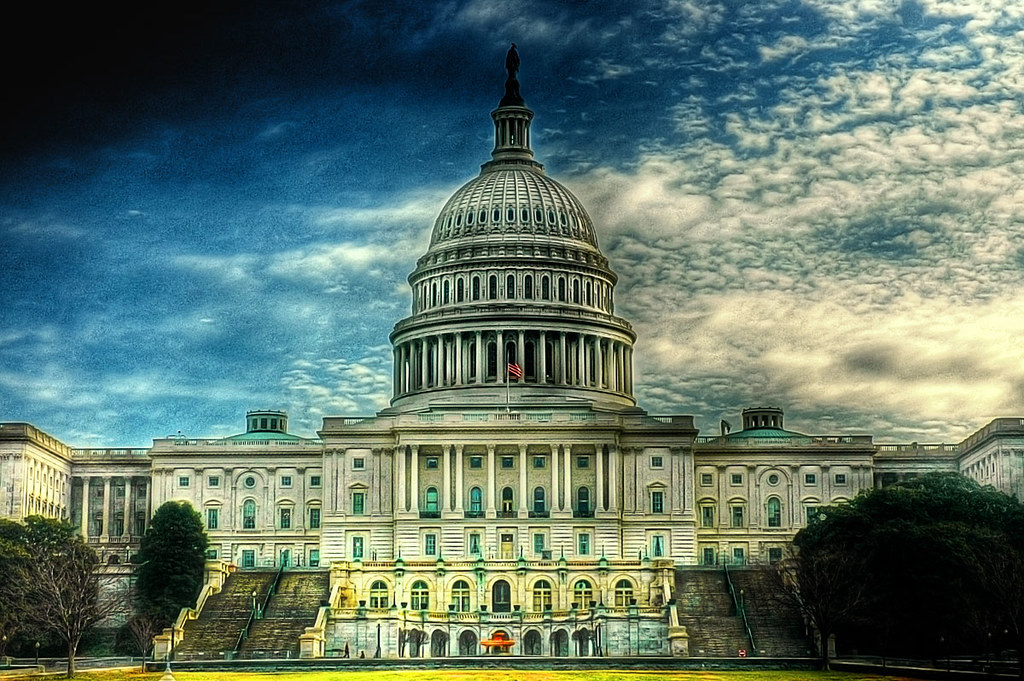 (Source: "US Capitol" by BlankBlankBlank is licensed under CC BY 2.0)

A big government attempt to rein in Apple, Amazon, Google and Facebook would likely be the most important tech antitrust action since a 1998 case against Microsoft.

In 2001, the Court of Appeals for the District of Columbia held that Microsoft had abused its market position by bundling its web browser together with its operating system.

The report's recommendations include prohibiting companies from competing in tech software or service areas where they are also the dominant channel of distribution. Since these companies are controlling access to markets, the report argues, "these giants can pick winners and losers throughout our economy," and that gives their own tech an unfair advantage. "When confronted by powerful monopolies over the past century  be it the railroad tycoons and oil barons or Ma Bell and Microsoft  Congress has acted to ensure that no dominant firm captures and holds undue control over our economy or our democracy," the reports states. "We face similar challenges today."

Book publishers have long complained they have limited room to negotiate margins with Amazon, which can arbitrarily deactivate their "buy" button. For the same reason, publishers have often been reluctant to criticize the platform on the record.

And platforms would need to make their services compatible with competing platforms, from the standpoints of data-sharing and interoperability.

In the investigation which led up to the report, 30 witnesses from the tech sector gave formal testimony before the panel in hearings, and another 240 gave interviews to committee staff.

Blockbuster – or too little, too late?

Response to the report has ranged from several observers, like the BBC's James Clayton, who called the report a "blockbuster."

But some who took that view also noted the recommendations only received support from the panel's Democratic majority.

Representative Ken Buck, a Colorado Republican on the panel, released what he called a Third Way alternative report. He agreed with the need for increased government antitrust efforts, and said he could support raising the anti-competitive bar for acquisitions, so big firms cannot simply buy their rivals.

He disagreed, though, over eliminating arbitration clauses and further opening up companies to class action lawsuits.

At the other end, critics like Jon Shieber have called the Congressional report "too little, too late".

The regulations in fact may even limit competition, says Shieber.

The proposals would "make it harder for Snap to make strategic deals that could put it in more direct competition with Facebook", he says, but won't challenge their dominant market position.

The effect will essentially be pulling up the ladder on the existing tech monopolies, Shieber says.

The investigation lasted a year and a half, but in terms of the battle over whether the US government should trim the power of big tech, pitting Capitol Hill against Silicon Valley, it is only the first scene of the first act.