A direct comparison: Tabulating 5G in the USA and China

It's no secret that the US and China are in a heated battle over the future of technology.

After all, the country that takes a commanding lead in technologies like quantum computing or artificial intelligence could turn that into an unbeatable advantage, either in terms of global economics or even military might.

And 5G is one of the handful of buzzwords that policymakers and others have put at the center of this evolving battle. That's no real surprise considering many futurists expect high-speed wireless networks to eventually connect all types of daily objects, from phones to cars to drones to computers.

As a result, operators and vendors in both countries have made significant strides toward building 5G networks and selling 5G phones and services.

Thus, here at the end of 2020, it's worth taking a look at exactly how the US and China stack up in 5G. Here is an apples-to-apples comparison of 5G in both counties, based on third-quarter 2020 data collected by Speedtest provider Ookla and provided to Light Reading. 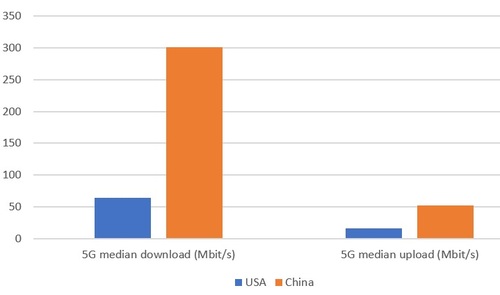 Ookla tracked the median download and upload speeds on commercial 5G networks in the US and China.
(Source: Ookla) 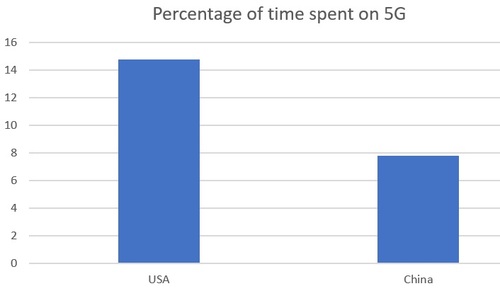 Importantly, the company also noted that its figures include a "confidence interval" (CI), which represents the range of values in which the firm believes the correct number is likely to be. Here's that data:

This data is noteworthy considering it's a direct comparison  apples to apples  of the 5G offerings in the two countries collected by the same company using the same methods. It's also representative of actual customer experiences, considering Ookla monitors actual network conditions via software inside the phones of real customers.

Of course, Ookla's figures aren't the only way to tabulate the "race to 5G" between the US and China. For example, China's top mobile network operators recently collectively counted more than 150 million 5G users. And according to China's telecom regulator, operators in that country have constructed more than 600,000 5G basestations so far.

In the US, there have been roughly 6 million 5G-capable phones  ranging from the Samsung Galaxy S20 to the Motorola Edge+  sold so far this year, according to data from M Science.