While other parts of the industry have felt the squeeze of shrinking supply, the SD-WAN market hasn't been significantly impacted by supply chain shortages, says Omdia's Dominika Koncewicz. Omdia projects SD-WAN revenue to hit $5.5 billion in 2025, and the analyst firm increased its forecast by $100 million since its last published prediction for the market in June 2021.

SD-WAN product revenues reached $844 million in Q2, a year-over-year increase of more than 30%. That shows, overall, that the pandemic hasn't negatively impacted the SD-WAN market, says Dominika Koncewicz, senior analyst, data center IT and software defined networks for Omdia. In fact, Koncewicz says 2021 will likely be a "stellar year for SD-WAN," a result due in part to the increasing need to support remote workers with "a stable and secure connection for virtual collaboration."

"The 30% year-over-year growth is on top of a quite good 2020," Koncewicz tells Light Reading. "That just shows how the business overall is pretty strong. Even though SD-WAN is quite a mature solution, we're seeing quite a lot of deployments and traction around SD-WAN solutions."

VMware continues to lead the SD-WAN market with 18% share of revenue, says Omdia, and Versa has overtaken the number two spot from Cisco with 17% revenue share. Versa increased its revenue by 16% quarter-over-quarter and 93% year-over-year. Cisco has been bumped to third place, with 15% market share. Koncewicz says Versa's success is partly due to collaborations with tier 1 OEMs such as Dell, who has helped Versa garner new clientele. 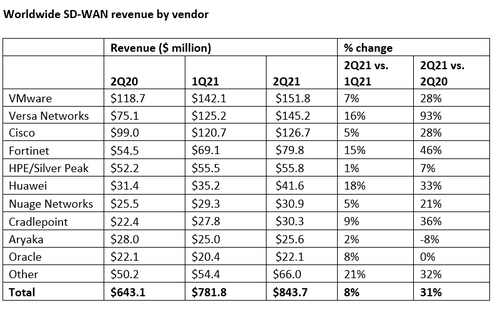 While SD-WAN for remote workers is the soup du jour, Koncewicz says many vendors understand they still need to focus on product development that serves the needs of on-premises employees.

"Some [vendors] are ready to help with home offices and some say that even though they're seeing their customers have more employees working from home, they still need to provide for those who are in office and those who are not traveling between countries and continents  and for those companies that haven't drastically changed how they work," say Koncewicz.

That strategy to continue development of on-premises SD-WAN services aligns with insight from Windstream CMO Mike Flannery, who witnessed a bit of hesitancy on the part of enterprise customers at the start of the pandemic to go all-in on SD-WAN for remote workers. Many organizations were grappling with the sudden need to support teleworkers while considering previous investments in their on-premises networks.

"Organizations still had quite a bit of their overhead tied up in physical locations and networking services," Flannery told Light Reading in a recent podcast. "Investment in a home-based SD-WAN would have been a materially additive cost at a time when business revenues were under pressure as a result of the pandemic."

In supporting remote workers, IT teams are interested in SD-WAN features that include network visibility, analytics, security and network performance tools. In addition, Koncewicz says vendors are developing analytics automation and AI capabilities as ways to differentiate their services.

Many of the top SD-WAN vendors have already been scooped up by networking and security vendors  HPE acquired Silver Peak for $925 million in July 2020, and Extreme Networks bought Ipanema for $70 million in September. However, Koncewicz says market consolidation will continue as "there are still quite a lot of small and local SD-WAN companies" whose products and established relationships with customers are appealing to larger networking and security suppliers.