Uptake in SASE services has accelerated during the pandemic  64% of businesses already utilize SASE or plan to deploy it within the next year  but only a third of respondents to a recent Versa Network survey could accurately define SASE.

"We've noticed really accelerated and rapid growth of our SASE purchases and deployments," says Mike Wood, CMO for Versa Networks. "We also knew the market was growing rapidly. It was a surprise to see [in the report] how many people are adopting today or planning to adopt SASE in the next 12 months  I didn't expect to see that number be that large."

However, if enterprises are moving full speed ahead with SASE, why did only a third of survey respondents accurately point out the full definition of SASE?

"Even with our biggest clients, there's a lot of confusion around what SASE is and what it consists of," Ed Fox, CTO of MetTel, told Light Reading in a recent podcast.

A number of service providers and vendors have told Light Reading that while enterprises might not be familiar with Gartner's terminology around SASE, many do understand it conceptually and recognize that bringing together networking and security services is an important step in their digital transformations. Gartner's coining of the term "SASE" is relatively new, but the concept and technology behind it have been materializing for years.

"That was a big surprise for us, the lack of understanding of what the definition of SASE was," says Wood. "But, then as we asked questions about what they were deploying and implementing, it turns out that they were bringing together a lot of these services and rolling them out, but didn't necessarily realize that they were adopting SASE."

While the technology behind SASE isn't new, what's novel is "the concept of integrating all of those into one single software image in the cloud, on premise or as a combination of both, and being able to manage it through a single interface," adds Wood.

To be fair, while only 31% of respondents selected the full, complete definition of Secure Access Service Edge (SASE), which Versa lists as "the convergence of networking and security services like CASB, FWaaS and Zero Trust into a single, cloud-native service model," the other options respondents selected were headed in the right direction. SASE can include SD-WAN services, policy-based security, and is important in enterprises' move to the cloud. 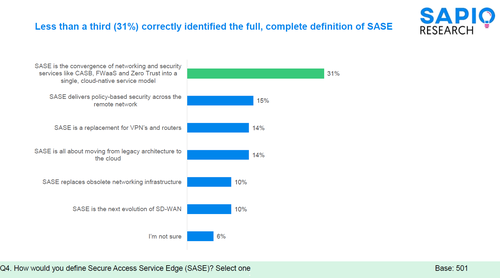 View a larger version of this image here. Survey respondents included 501 IT security and IT networks professionals; the survey was conducted by Sapio Research in May 2021.

In fact, 84% of businesses have accelerated their digital transformation and move to the cloud during the COVID-19 pandemic, and nearly half or 44% of businesses forecast that their employees will continue remote work full or part-time as operations return to the "new normal," according to the Versa report.

"From a component perspective, our customers are fairly well versed on the key components of SASE which is SD-WAN, web security or some form of firewalling, and remote access," Mike Frane, vice president of product management for SD-WAN with Windstream Enterprise, told Light Reading in a recent interview. "The promise of SASE is that all of that will be governed by one set of business policies or rules and that's the piece that will mature over the next few years, how all of that will come together."

One of the primary reasons enterprises are turning to SASE is for improved security. Now that the rush to provide remote workers with connectivity to their business applications is over, organizations are also reevaluating their approach to security. About 43% of businesses said the impetus behind adopting SASE is due to their need to improve the security of devices and applications used by remote workers. In addition, 31% surveyed by Versa hope SASE will help them prioritize the performance and delivery of business-critical applications in the cloud; 30% are looking to SASE as a more reliable solution for remote access to enterprise networks.

Remote work habits have also brought to light issues that IT teams will need to overcome to support the distributed workforce. About 36% of respondents end users reported dropped connections when using applications such as videoconferencing, and 31% lacked access to real-time tech support. Cybersecurity has also been an issue for remote workers  37% of businesses weren't able to enforce security policies for their remote employees and 34% struggled to identify new threats to users. In response to these types of issues, 87% of businesses are reevaluating their remote connectivity policies.

Still, not everyone is ready to board the SASE train  of the companies that haven't yet adopted SASE or don't plan to, 26% said they are focused on other priorities within their organization and another 26% said they lack the budget to invest in new technology.

Versa's report included responses from 501 IT security and network professionals from the US, UK, Germany and France.