Elon Musk is the telecom industry's Tyler Durden. For anyone who hasn't watched Fight Club, Tyler Durden is the sexy, madcap alter ego of the schizophrenic narrator, the representation of everything his meaningless life as a car recall specialist isn't.

"I am smart, capable and, most importantly, I am free in all the ways that you are not," says the imaginary Durden (played by Brad Pitt) to the narrator (Edward Norton) toward the end of the movie.

Musk's appearance by video at this year's Mobile World Congress (MWC), then, was the most exciting thing to happen at the trade show since Mark Zuckerberg turned up in person a few years ago.

The industry goggles at these disruptors who will eventually kill it with a sort of wide-eyed wonder, like young children staring at deadly animals.

But the interest in Musk is not hard to fathom. He is an inventor and a visionary in the coolest sense. The closest the telecom industry has right now is probably Tareq Amin, the chief technology officer of Rakuten Mobile.

But while Amin's big idea is a low-cost radio, Musk wants to build a city on Mars. He smokes weed on Joe Rogan podcasts and tweets as outrageously as Donald Trump once did. 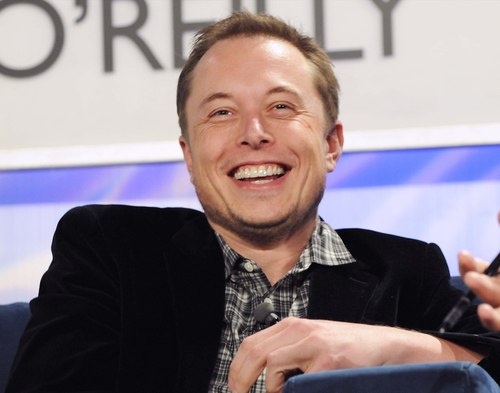 Elon Musk's Starlink project could require a total investment of $30 billion, he says.

Musk is many things the telecom industry is not and yet dreams it can be. The GSM Association, which organizes MWC, would probably have loved to bring him on sooner.

Instead, it initially had to make do with its uninspiring lineup of phone bosses and their routine complaints about regulators. You would not be worried if any of them took your wife out for dinner, one former show attendee remarked. You might worry about a date with Musk.

If there is a big theme at this year's MWC, it is not the cloud, or 5G, or the Internet of Things, or the dreaded "digital transformation" that seems to be taking a geological age. No, it is the outsourcing of ideas and innovation to big tech and its big-brained entrepreneurs.

Because even before Musk showed up, Amazon and Google had become almost impossible to avoid bumping into at this year's show, whether physically or virtually. There was barely an announcement that did not feature one or the other. Amazon even set up its own "virtual village," inviting telecom old timers such as Nokia, Telefónica, Verizon and SK Telecom to swing by.

Marc Rouanne, a former Nokia executive who is now in charge of networks at Dish, captured the mood perfectly.

"In the telco world, speed of innovation is too slow," he said during the Amazon sub-event. His own company is entrusting nearly all its systems to Amazon's public cloud.

Burning out his fuse up here alone

Musk's direct contribution is Starlink, a constellation of 1,500 low-Earth orbit satellites beaming broadband connectivity to the hardest-to-reach 3% to 5% of the world's population.

Satellites are practically unmentionable in parts of the telecom sector, having bankrupted some of their original investors back in the 1990s, when the industry was still brave. Picking up more than 20 years later, Musk thinks he may have to plow up to $30 billion into his project, with no guarantee of success. "Step one is not to go bankrupt," he says.

Starlink probably won't disrupt telecom like the public cloud is doing, or even have as much impact as the Facebook-led Telecom Infra Project. Operational in 12 countries, it has attracted fewer than 70,000 customers so far, although Musk believes half a million within a year is feasible.

It boasts major technical advantages over other satellite systems, but its target market sounds like millionaires living in Himalayan mountainside retreats. Customers must spend $100 a month for a service and $500 on a satellite dish that costs Starlink $1,000 to produce.

"Selling terminals at half price is not super compelling at scale," admits Musk.

Succeed or fail, Starlink is a blazing sign of Musk's derring-do. Someone who says he is motivated by a desire to "maximize the probability the future is good" seems unlikely to stop at satellites, electric vehicles or even space travel.

And that explains why telecom is transfixed, scared Musk could make them look (even more) clueless, secretly hoping to fly on his ship.

Not of the telecom industry, and not even physically present, Musk was introduced as "the keynote we've all been waiting for." It was a tacit recognition that telecom cannot even inspire its own troops, let alone the consumers and businesses that buy its products.

For all the cleverness of telecom technology, its operators have become like the local electricity provider  essential, but not very exciting. The GSMA will be doing all it can to secure Musk's services again next year.