The speed performance of Starlink, SpaceX's budding satellite broadband service, has been inconsistent of late, according to a recent batch of Ookla Speedtest data.

Most notably, the median speeds of the service, which is still in beta form, have dipped in recent months. However, Starlink's top speeds have been climbing, PCMag's Michael Kan reported, based on those findings (Ookla and PCMag are both owned by Ziff Davis).

Those median download speeds, the report found, dropped from 80 Mbit/s to 50 Mbit/s over the past two months  perhaps due to more users coming on and loading the system  but they appear to be on the rise again. 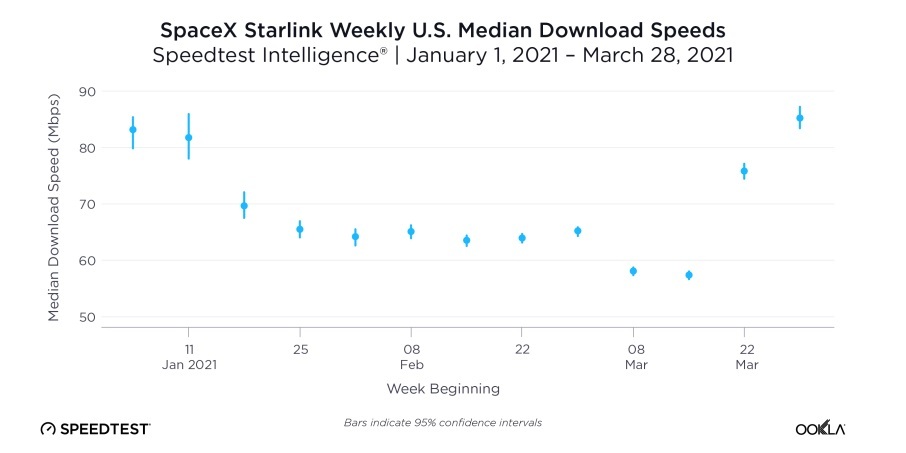 (Source: PCMag/Ookla)
Click here for a larger version of this image.

Meanwhile, recent tests also show top-level, burst speeds have effectively doubled to 200 Mbit/s, with some instances of more than 500 Mbit/s.

"The only thing consistent with Starlink service is the inconsistent speeds," a Starlink tester based in Idaho told PCMag, noting that tests on one particular day saw Starlink speeds fluctuate from as low as 36 Mbit/s down and 6.8 Mbit/s upstream to as high as 213 Mbit/s downstream and 9.72 Mbit/s up.

Of course, Starlink is still in beta, so it's expected that kinks will continue to be ironed out as the service gets closer to a full commercial launch.

With respect to performance, the report also points out that Starlink informed beta users this week that recent evening outages were due to "preventative maintenance on various ground gateways" along with a bug that "caused some packet processing services to hang until they were reset." However, Starlink believes those issues will be resolved with a new firmware update.

Starlink also referenced a new feature coming soon that will auto-switch connections to another satellite when those interruptions become too frequent. "In the future, if communication with your assigned satellite is interrupted for any reason, your Starlink will seamlessly switch to a different satellite, resulting in far fewer network disruptions," SpaceX explained in the email, according to PCMag.

No end of beta in sight

Meanwhile, there's still no telling when Starlink will be transitioned to a full commercial service.

SpaceX does not "have a timeframe for getting out of the beta phase," SpaceX President Gwynne Shotwell said Tuesday at the Satellite 2021 LEO Digital Forum, adding that the company still has "a lot of work to do to make the network reliable."

She also doesn't expect Starlink to focus on tiered pricing. The current beta service sells for a flat $99 per month, plus the $499 upfront costs for the hardware. "We're going to try to keep it as simple as possible and transparent as possible, so right now there are no plans to tier for consumers," Shotwell added.

The FCC said the new rules are in response to ISPs engaging in 'a pattern of new practices that inhibit competition' in apartment buildings and other multi-tenant environments.