The future of satellite services is not fixed at any one orbit. Some services are tailored for low-latency delivery at low-Earth orbit (LEO), others are beamed from medium-Earth orbit (MEO), and still others are sent down from geosynchronous (GEO) satellites that might reside more than 20,000 miles above the Big Blue Marble.

Although some new satellite players, such as SpaceX's Starlink and Amazon's Kuiper project, are fixated on services delivered via a multitude LEO satellites, other companies, such as SES, are moving ahead with strategies that combine the capabilities and capacities of a fleet of MEO and GEO satellites, with the potential to add LEOs to the mix.

While work with Microsoft Azure will provide a way for SES to link its emerging global platform together in the cloud, meshing all of that together on a single customer-side terminal on the ground represents yet another challenge. 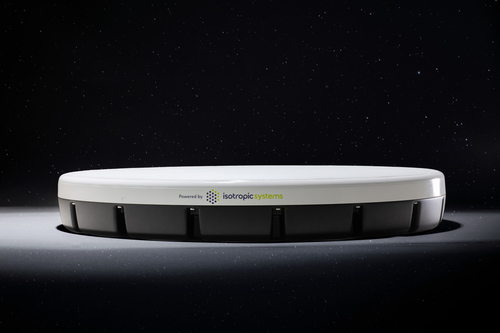 Isotropic Systems, a UK-based company that counts SES as a customer and a strategic investor, has been focused on the challenge. And, this week, Isotropic announced that its single optical beamforming antenna technology had crossed a critical milestone: successful field tests of a terminal that simultaneously supported satellite services delivered from multiple orbits.

That field test of Isotropic's multi-link antenna was conducted at SES's Manassas, Virginia, teleport on the night of October 22. It linked a Hughes "Jupiter" GEO satellite with an SES "O3b" satellite situated in medium-Earth orbit.

"The reality is that this technology means you can have as many connections as you want from the terminal to as many satellites you can see in the sky," Finney said.

He said the field test shows that the technology overcomes "two major issues" faced by the satellite industry: an inability for satellite companies to link their respective satellite systems (he likened it to trying to interconnect the mobile networks of Verizon and T-Mobile) and interconnect satellites that live at different orbits. Until now, the ground terminals have been limited to connecting to one satellite at a time.

"You're only as good as the network that you're on," Finney said.

Isotropic's terminal is not limited to satellite connectivity. It's also been built to integrate multiple cellular networks, including 3G, 4G and 5G, he said

Isotropic, he adds, has effectively developed a phased array-like system that can activate multiple feeds on a single beam. "We're able to bend the radio waves essentially in the direction of the satellite with very high pointing accuracy, phase those lenses together and  send multiple links in and out of those optical lenses without any restriction or without losing any of the bandwidth," Finney explains.

That integration at the device level goes beyond the radio link layer, covering other elements such as power and routing. "We're collapsing all of that infrastructure into one single, low-profile solid-state device," Finney said.

SES is an early primary use case. The company is moving ahead with O3b mPower, a global connectivity platform that will feature a constellation of new MEO satellites working in conjunction with SES's existing fleet of GEO and MEO satellites. Isotropic is one of several technology partners playing a role in SES's O3b mPower project.

But SES is not alone in pursuing that strategy. Inmarsat and Telesat are among the operators going with multi-orbit systems. "If you want to really compete head-on against the threat of these new rivals, you've got to combine your assets," Finney said.

Finney said Isotropic has booked more than $35 million in non-dilutive NRE (non-recurring engineering) contracts with operators that want to bring features into the company's products.

"We're talking to pretty much every player at this point," he added, noting that the company has demos, trials and commercial pilots underway with commercial and government entities across each of those three tracts.

Finney says the technology's core module is applicable to a wide range of enterprise, government and defense-related services and applications that can make use of satellites residing in multiple orbits, depending on the use case. Examples of markets that Isotropic is targeting include aeronautical, connected buses and cars, cruise ships and fishing vessels, and rail.

For now, Isotropic will steer relatively clear of the low-margin consumer broadband satellite service market, though the company does have a design that would work for Starlink or Amazon's coming Kuiper service. "It's not where we're really focused. We're really focused on connecting machines, connecting people," Finney said. "We'll keep our options open for consumer broadband. We know how to get it done."

In the wake of the recent field tests, Isotropic plans to step up manufacturing and issue its first commercial products by the middle of 2022. Finney says the company has sold out its initial production capacity for next year and is starting to build a backlog for 2023.

In September, Isotropic raised $37 million as part of an expanded Series B round to use toward its planned 2022 product launch, taking total funding past $100 million. Existing investors such as AEI HorizonX, Promus Ventures, SES and the UK government participated.

Founded in 2013, Isotropic has 105 full-time employees and expects to add "several hundreds of jobs in the UK over the next 24 months," Finney said. "We're now in scale-up mode."