The launch, from French Guiana on July 30, is the sixth in 2021 for France's satellite launch company, which is making up for lost time after a year-long hiatus. This is also the company's first heavy launch of the year aboard its Ariane 5 platform, after previously showing off its in demand smaller-satellite launch muscles, at the other end of the spectrum. 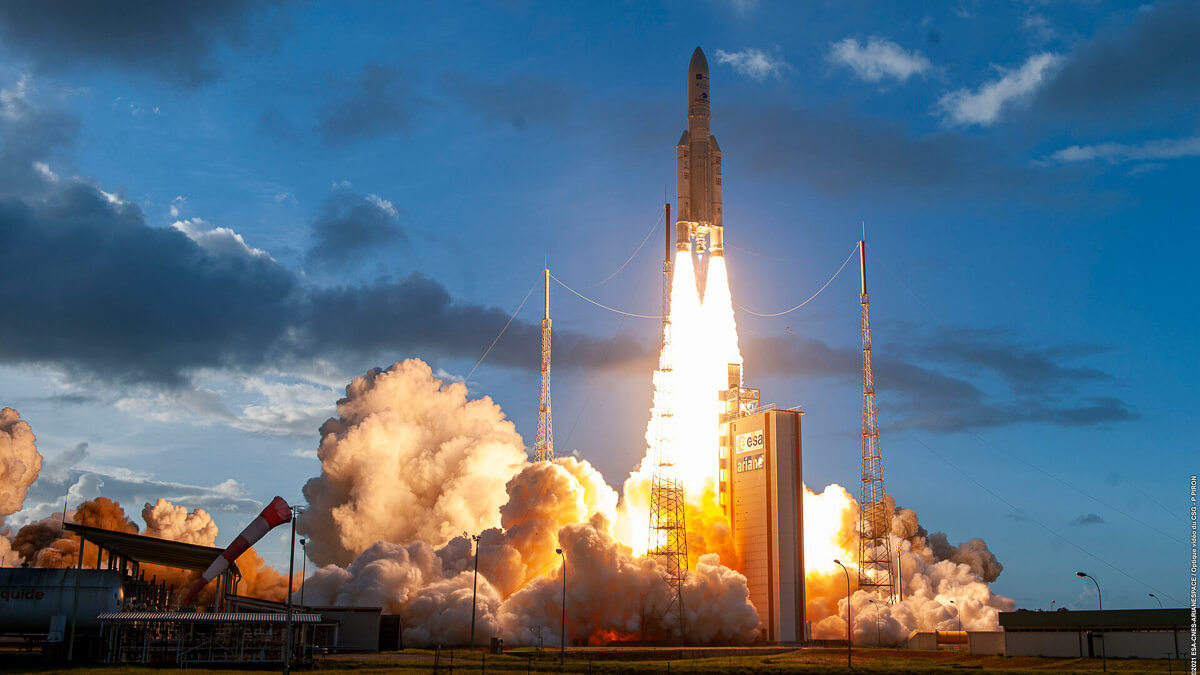 Lift off: The launch was the sixth successful mission of 2021 with two telecommunications satellites put into orbit for Embratel and Eutelsat.
(Source: Arianespace)

A quantum of solace

The Eutelsat Quantum has been called a chameleon satellite: Its transmission beams can be reconfigured from the ground in a matter of minutes, says its maker. This is a big difference from most satellites, which are hard wired, and means the satellite will be more versatile during its 15-year lifespan.

The Quantum, which will cover an area from west Africa to Asia, will be able to change the areas covered by each of its eight beams, and the power of its signals.

It could boost power or add beams during one-off events or natural disasters, or even to track passengers on a moving ship. The satellite also will be able to pinpoint the origin of interfering signals (whether intended or not), and take action to remedy the interference.

Last week Eutelsat reported that its income had decreased 29.2% in the year through the end of June, to 347.2 million, but CEO Rodolphe Belmer put a strong face on things and promised "a return to growth from FY 2022-23."

The context of this launch gets more interesting when you consider this is one of two trial runs for the company's all-important launch of the James Webb Space Telescope (JWST), a joint project between Nasa, the European Space Agency and the Canadian Space Agency.

The orbiting telescope is currently set to hit the skies in late November aboard an Ariane 5.

The JWST is often thought of as a successor to the Hubble Space Telescope, but it focuses on the infrared part of the spectrum. Its ability to see longer wavelengths will enable it to look more closely inside dust clouds at the formation of stars, planetary systems and galaxies.

Realistically, a reusable "Ariane 7" rocket is what, a decade away? Among its competition by then: super-reliable Falcon 9, Starship, New Glenn, Partially reusable Vulcan, Falcon 9 clones from China, MHI-built reusable rocket, and goodness knows what else.

The telescope's been a while coming. The observatory was delayed by a decade and a half from its initial planned launch date in 2007, while costs telescoped from $500 million to $10 billion.

It is currently being folded up by Northrop Grumman in preparation for its move to French Guiana.

Meanwhile the even broader context of all this  today's launch, and the James Webb Space Telescope  is whether the Arianespace empire can fight back against Elon Musk and SpaceX. Arianespace, the world's first commercial launch company and jewel in the crown of Europe's space capabilities, formerly owned the market for sending hefty telco satellites up into orbit.

Geostationary satellites like these were the space launch market for a good three or four decades. The market for space launch is now going smaller. It's chiefly small satellites that will boost the number of active satellites in orbit 230% by 2025 from the 3,000.

Moving with the times, Arianespace spread into "rideshare" too last year with its Vega launcher powering the Small Spacecraft Mission Service, which on its first mission carried 53 satellites for 21 customers.

The challenge is that Europe currently lacks two things: a publicity-gulping space advocate like Elon Musk, and scale, which is letting SpaceX push the costs of space access down.

SpaceX and Arianespace increasingly are going head-to-head across their offerings, with the 4 billion next-generation (if delayed) Ariane 6 meeting the challenge from Elon Musk's Falcon 9. Arianespace's reign as the world's leading commercial launch provider collapsed in 2017, in the number of commercial satellites launched. At times, Arianespace has seemed to struggle for relevance in the SpaceX era.

Ariane 6 is 40% cheaper than the workhorse Ariane 5, a response to how firmly SpaceX has pushed costs down.

But the Ariane 6 will still be single-use, where the Falcon is reusable, and pricier than Falcon 9. A next-generation, reusable Ariane 7 is already on the design table. Though "realistically, a reusable Ariane 7 rocket is what, a decade away?," tweets space journalist Eric Berger. And "among its competition by then: super-reliable Falcon 9, (SpaceX's) Starship, (Blue Origin's) New Glenn, partially reusable (United Launch Alliance) Vulcan, Falcon 9 clones from China, MHI (Mitsubishi Heavy Industries)-built reusable rocket, and goodness knows what else."

On the other hand, with the satellite launch market tripling in size over the next decade to $19 billion, in an expanding market there might well end up enough to go around.