UK to bus in 'thousands' of foreign workers for fiber  report

According to The Times (paywall applies) Patel sent a missive to network operators explaining that foreign workers could be fast-tracked through the UK immigration system to help bridge any skills gap shortages that threaten to slow down the pace of fiber rollout.

Workers from abroad, added The Times report, could arrive in the "thousands." 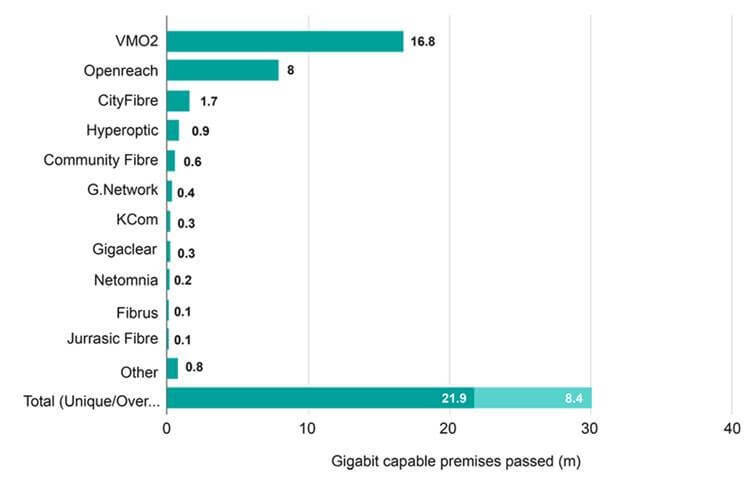 Premises passed (million) by a gigabit-capable network, broken down by supplier. Data accurate as of August 17, 2022.
(Source: Operator Reports)

"The Home Office is on standby to help you and your sub-contractors understand the immigration system and receive an expedited service," Patel told telcos.

She has apparently asked the Home Office to ensure that enough English language testing and visa appointments are made available, although the numbers involved – despite the four-digit speculation by The Times – are still to be nailed down. The Home Office is only at the stage of asking for estimates on how many foreign workers might need the fast-track service.

Project Gigabit working through the gears

The Times report surfaced shortly before the UK's Department for Digital, Culture, Media and Sport announced the first "major contract" under Project Gigabit, a £5 billion (US$5.8 billion) government program to help fund broadband rollout in regional and rural areas.

The UK's prime minister Boris Johnson – just days away from being replaced by either Liz Truss or Rishi Sunak – was in North Dorset today on the back of the government signing a £6 million ($7.02 billion) contract with Wessex Internet.

Under the contract, Wessex Internet will connect 7,000 hard-to-reach premises with a gigabit-capable network. The first home will be connected by the end of the year, with an expected completion date for all by 2025.

As part of last week's Project Gigabit Summer Update from Building Digital UK (BDUK), an executive agency of DCMS, the UK government announced that the total value of procurements as part of the scheme reached over £690 million ($807.9 million), and that the number of premises passed with gigabit-capable broadband (again, as part of the scheme) reached 498,000.

The UK government has set a target of 85% premises UK-wide in reach of gigabit speeds by 2025.

According to ThinkBroadband, cited approvingly by BDUK, seven out of ten UK properties "can access the fastest and most reliable internet connections needed for families and businesses to take full advantage of revolutionary new advances in technology in the coming decades." The penetration rate was a shade over 42% in August 2021.

The vast majority of that number are unlikely to be surfing on full-fiber links, however. UK regulator Ofcom reported in May that although two thirds of UK homes were within reach of gigabit broadband, only a third could get full-fiber packages.

Leading gigabit-capable network rollout in the UK by some distance is Virgin Media, which passes more than double the number of premises reached by second-placed Openreach (see table above).