Is US Lurching Back to Monopoly Status?

SAN FRANCISCO -- Incompas 2017 -- The ranking Democrat on the House communications subcommittee says she's worried about movement away from the competitive landscape of the 1996 Telecommunications Act that pushes the US toward a less-competitive environment and more monopolies that could stifle innovation and consumer choice.

"I'm worried because there are, in my view, major diversions from the Telecom Act, that is we have moved more toward  monopolistic tendencies," said Rep. Anna Eshoo, D-Calif., in a keynote Q&A here Sunday night at the annual event for the competitive telecom industry. "That is not good for the country, because if you don't have competition, you are not going to have innovation and it's not good for consumers either. Competition is as much a part of our economic system, our capitalism, as what we think of as a democratic society."

At the same time, Eshoo, who represents Silicon Valley, decried antitrust talk encircling some of the giant Internet companies including Google and Amazon -- although she did not mention any specific companies. Both Eshoo and Incompas CEO Chip Pickering -- who worked on the Telecom Act as a congressperson and staffer respectively during the mid-90s -- credited that legislation with helping spark the Internet boom and the many technology innovations that have followed. 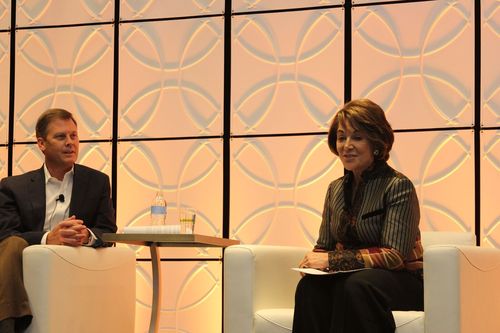 All of that is being threatened, the veteran Congresswoman said, by communications subcommittee members who weren't around when the Telecom Act was passed and may not know what the legislation does.

"There are more voices in Congress now than in my 25 years in Congress -- it is not just a Greek chorus chanting on the side of the stage, it has moved center stage -- to question what has come out of the Telecom Act, what happened in Silicon Valley as a result," Eshoo commented. "I would say 'follow the money.' Who are the people that are doing this, from what institutes or foundations do they come and who is funding those organizations?"

She and Pickering -- who conducted the Q&A session -- also specifically called out Federal Communications Commission (FCC) Chairman Ajit Pai for his efforts to roll back net neutrality rules put in place during Tom Wheeler's turn at the FCC, and upheld by the courts. (See Net Neutrality, Here We Go Again.)

Eshoo specifically called for Congress to hold Pai's "feet to the fire" to make sure he is enforcing the Telecom Act of 1996 and its competitive requirements. And she referenced Pai's dismissal of the millions of comments that have come into the FCC opposing changes to net neutrality -- Pai's FCC has said that many alleged votes were falsely generated as part of distributed denial of service attacks -- as an indication he is not listening to what consumers really want.

"I think the chairman and whoever agrees with him are going to have a rude comeuppance," Eshoo said.

She referenced a few measures she and others are bringing up to aid competition and improve security. One is a "dig once" measure that would require fiber optic lines to be installed as part of any federal highway construction, and another is a "touch once" approach to pole access and permitting processes for building local fiber networks. In addition, Eshoo backs a bill that would let the National Institute of Standards and Technology create voluntary standards for businesses and others to follow in setting up and maintaining network security.

On that front, Eshoo said, she is bucking fellow Dems who want the standards to be mandatory. It is more important to her to get something in place to prevent security breaches.

(Homepage image by Rich Brooks on Flickr. CC BY 2.0 license; photo has been cropped and brightened.)

Joe Stanganelli 10/21/2017 | 10:22:22 PM
Multi-vertical "monopolies" in tech are not monopolies I'm very concerned about this new in-vogue careless slapping of the "monopoly" label onto entities like Amazon. Don't get me wrong; I'm far from a big fan of the company. That said, multi-market participation -- even if it's a LOT of markets -- is not in any way, shape, or form a monopoly absent *state* participation/support. To approach antitrust law from this angle is a dangerously slipperly slope that threatens to bind all business owner's hands.

If companies couldn't pivot, then we'd have a serious blocking of innovation.
Reply | Post Message | MESSAGES LIST | START A BOARD

Carol Wilson 10/17/2017 | 4:10:35 PM
Re: What that? That is a major topic here - the fact cable now holds a 70% market share of the residential broadband market. The Incompas membership includes Google, Twitter and more of the Internet giants, and they have huge concerns there.
Reply | Post Message | MESSAGES LIST | START A BOARD

f_goldstein 10/17/2017 | 1:51:19 PM
Re: What that? Of course TA96 made the consumer Internet possible. From 1993 to 2001 or so, most consumer access was via dial-up. The iLECs abhored, detested, hated it and tried to squash it. They also couldn't handle it -- their CO switching capacity was ordered on a 5-year upgrade cycle and they were largely out of capacity by 1996. So CLECs literally saved the day by deploying switches to receive high volume incoming calls. CLECs also deployed a lot of the first DSL, and cable took advantage of TA96 to add phone service.

The Internet was taken into account in TA96. The Act did not regulate it because the Act specifically regulated telecommunications service in Title II, and it was as clear as the nose on Ted Stevens' face that the Internet was an information service. That distinction was meant to update and memorialize the Computer II definitions of basic and enhance services. And the FCC didn't regulate enhanced services; it regulated basic (telecommunications) services in order to create a level playing field for enhanced services.

The Cheney-Rove FCC in 2005 revoked Computer II and made a total mess of things. And the "neutrality" advocates knew so little about the legal basis of the Internet that they spent their time advocating broken solutions.
Reply | Post Message | MESSAGES LIST | START A BOARD

KBode 10/17/2017 | 12:28:22 PM
Re: What that? Well again, users have the choice not to use Amazon. The same isn't true of Comcast. And as more telcos back away from residential DSL in countless areas because they don't like the ROI, the cable industry is nabbing a bigger monopoly than ever in many of these markets.
Reply | Post Message | MESSAGES LIST | START A BOARD

There was no information at all about the Internet in the 96 Act.  It was not considered and that is one of the huge hurdles that we have today.  For example, the monopoly status really only exists if you consider Cable, Telecom and Wireless as 3 separate markets.  In fact, they are often substitutes for one another.  Cable...in point of fact...has a much larger market share of consumer broadband.

If the 96 Act created competition, then why are we headed to monopoly?  My experience is that it is the old 80/20 rule.  The primary carriers run 80% of things.  The 20% is those that are "hard" to serve.  That 20% is served by alternatives...often CLECs or ISPs.  There are LOTS out there, but they are generally small, regional players.

The challenge is that this business is all about deploying capital.  These little competitors simply don't have the access to capital that the big boys do and never will.  In fact, the disparity is so large that the large CSPs don't even bother to market against the small ones.  The amount of buisness that they lose to them is a trivial quantity.  Note:  they only get nervous when somebody with significant access to capital gets involved (Mid-Large Cities or Google).  Then, they have a fit and put the legal foot down to crush them.

If the 96 Act was crafted for the world today, the only service worth regulating would be Internet Service.  The rest would be secondary.

mendyk 10/16/2017 | 1:28:52 PM
Re: What that? Maybe what she said wasn't worth recording after all. And for the record, Alphabet did contribute somewhat modestly to her campaign coffers.
Reply | Post Message | MESSAGES LIST | START A BOARD

Carol Wilson 10/16/2017 | 12:55:54 PM
Re: What that? So you are surprised that the congresswoman representing Silicon Valley doesn't want to see Google regulated? Really?

That was overstated, for sure. It is true that the '96 Act put in place a telecom structure that was more favorable to supporting the Internet, via greater competition and interconnection.

It was mostly two politicians - one in office, one no longer - taking a bit of a bow in front of a friendly audience.
Reply | Post Message | MESSAGES LIST | START A BOARD