Three major regulatory moves this week are throwing the media and telecom world into collective hysteria.

First, there's the decision by the Department of Justice to file a lawsuit to block the merger of AT&T Inc. (NYSE: T) and Time Warner Inc. (NYSE: TWX). The argument? That AT&T could use its control of Time Warner's programming to harm competition. (See DoJ Sues to Block AT&T/Time Warner.)

The ironic part is that the DOJ's decision to challenge the merger comes just after regulatory move number two -- a decision by the Federal Communications Commission (FCC) to relax many broader media ownership rules. The FCC announced just yesterday that it's eliminating federal statutes that block media companies from owning both a newspaper and a broadcast station or a radio and a television station in a single region, and ones that make it difficult for a single company to own multiple TV stations in any one media market. On the one hand the government is holding back consolidation, and on the other hand it's encouraging mega media mergers.

But wait there's more! The moves by the DOJ and the FCC are also happening at the same time that rumors are swirling over a potential buyout of several Fox Broadcasting Co. -owned TV studio and international pay-TV properties.

After news that Walt Disney Co. (NYSE: DIS) was looking to make an acquisition, several outlets have since reported that Comcast Corp. (Nasdaq: CMCSA, CMCSK), Sony Corp. (NYSE: SNE) and Verizon Communications Inc. (NYSE: VZ) are also interested in the Fox assets. Comcast is particularly notable as a suitor because it already owns NBCUniversal. The federal government did not block that deal at the beginning of the decade, which makes it more difficult to justify filing suit against the AT&T/TW merger today. Now, regulatory conditions on the Comcast transaction are set to expire, and it apparently wants to add to its media holdings with new Fox studio content. (See Does AT&T Deserve Time Warner?)

On the political front, Sinclair Broadcast Group is finding that its backing of the Trump's administration and regulatory agenda has paid dividends. The loosening of the media ownership rules mean Sinclair can proceed with its proposed $3.9 billion buyout of Tribune Media Services Inc. without divesting of some of its existing TV stations.

However, AT&T isn't so lucky. Despite CEO Randall Stephenson's cozying up to President Trump both before and after the election, the telco still finds itself at the short end of the merger stick. (See AT&T CEO Hoping for a Trump Bump in 2017 and Cable, Telecoms Spend Millions to Fete Trump.)

That may be because the DOJ legitimately finds the acquisition of Time Warner too big to swallow. But opponents of the Trump administration believe the decision is due at least in part to the president's hatred of Time-Warner-owned CNN and the idea that a news station that's been critical of him could gain more market power.

The layers of irony are literally unending.

And then there's the third major regulatory happening of the week -- news today that the FCC is gearing up to roll back the 2015 Open Internet Order, a.k.a. net neutrality regulations. 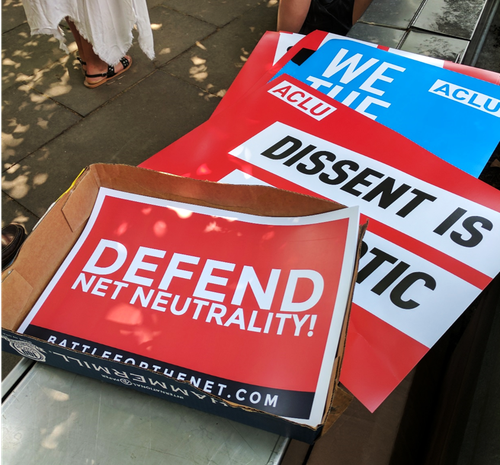 This is the Holy Grail that Internet service providers have been waiting for since Chairman Ajit Pai took over leadership of the FCC earlier this year. Although some ISPs say they're happy with the rules that prevent blocking, throttling and paid prioritization on the Internet, the big ones are all vehemently against the FCC's decision more than two years ago to reclassify their services under Title II of the Communications Act. While the FCC said it would forebear from price regulations under the Title II designation, the change in classification opened the door for just such a possibility. And that's something most ISPs simply can't stomach. (See Net Neutrality, Here We Go Again and Net Neutrality: Before the Vote.)

The fight over net neutrality and Title II won't end with any new decisions by the current FCC leadership. The Open Internet Order was upheld in court last year, which means advocates have at least that legal standing for the battle ahead.

Well that and consumer outrage, which is already threatening to erupt in protests.

The pro-net-neutrality group Fight for the Future says consumers will march on Verizon retail stores in select cities and continue on to their legislators' offices on December 7 to demand that the Open Internet Order be upheld.

So who's thankful for industry regulation this holiday season? It definitely depends on who you ask, and when.

Phil_Britt 11/27/2017 | 7:24:15 PM
Re: Tech evolution & complaining to the right people Fully agree. I started in newspapers and it was always important to have both (or more) sides represented. Though we've come a long way from three networks, the concentration of media should always be a concern.
Reply | Post Message | MESSAGES LIST | START A BOARD

KBode 11/27/2017 | 7:20:53 PM
Re: Tech evolution & complaining to the right people The FCC is currently gutting rules specifically to make life easier on Sinclair.

And again, the current Trump/Pai plan is to largely gut FCC authority, then shovel any remaining consumer protection to an FTC that can't make rules and is so over-extended most telecom issues will get lost in the wash (the entire point).

Anybody that thinks the one/two punch of apathetic regulators and no competition ends well for consumers or small businesses needs a history lesson, frankly. We're treading down a very dangerous path here.
Reply | Post Message | MESSAGES LIST | START A BOARD

Phil_Britt 11/24/2017 | 11:11:35 AM
Re: Tech evolution & complaining to the right people As you note, there are plenty of technological advancements, but even so, people do tend to default for a couple of sources for their news, be it favorite online sites, TV or newspapers (there are still a few of us who like turning physical pages).

So the FCC can still have some power -- if it chooses to -- and block mergers when it means too much concentration in a market, like Sinclair/Tribune. Fewer editorial voices hurts all of us.
Reply | Post Message | MESSAGES LIST | START A BOARD

KBode 11/22/2017 | 7:39:58 PM
Re: Tech evolution & complaining to the right people "The FCC's role in consumer protection has become largely voided by technological advancement."

How so? There's total market failure in many areas, and the FTC's rule-making authority is limited. These rules provided some basic rules of the road in the wake of obvious bipartisan apathy to a broken broadband market.
Reply | Post Message | MESSAGES LIST | START A BOARD

Joe Stanganelli 11/21/2017 | 2:28:41 PM
Tech evolution & complaining to the right people The irony is resolved by the fact that we're talking about different agencies.

The FCC's role in consumer protection has become largely voided by technological advancement. The telegraph is dead, few people still get their news from physical dead-tree newspapers, and spectrum is no longer as limited a commodity as it once was. Antitrust considerations (which are inherently fluid; what Microsoft got beaten down for years ago is routine business practice today) are far different today than they once were.

Judging by his words (including his recent op-eds) and his actions, Pai's consequent philosophy seems to be that, because of these technological changes that have made the Internet an intrinsic part of our lives, the FCC should not overlap so much with the FTC on consumer-protection issues where Congress has expressly failed to legislate.

And from the perspective of democracy, it's hard to see where this philosophy is wrong jurisprudentially (even if one is politically in favor of government oversight to assure net neutrality). Protesters who are afraid of not being able to internet anymore are probably screaming at the wrong government officials. They'd be better off writing or calling their Congresspeople. Legislation is always more powerful than regulation. And, more pragmatically besides, enacting new law in this area is more realistic in the current political environment than promulgating new regulations is.